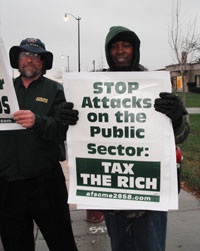 It’s become a common refrain: public employees from teachers to parking meter attendants to firefighters to nurses are bleeding state and local budgets dry with exorbitant wages and pensions.

As recent news reports and communiqués by conservatives have pointed out, a portion of public sector employees do earn what many middle- and working-class Americans would consider very generous wages and benefits. USA Today reported that on average, public workers earn $11.90 more per hour than comparable private sector workers.

But such numbers constitute misleading propaganda, according to labor analysts and proponents and several recent studies, including an April report by the Center for State and Local Government Excellence and the National Institute on Retirement Security (NIRS). “At its heart,” Amy Traub wrote in the The Nation in July, scapegoating of public employees is an insidious way to divide public and private sector workers who share many of the same interests.”

The NIRS study noted that when education and work experience are considered, state and local employees earn 11 to 12 percent less than comparable private sector workers; and their compensation is still lower when their benefits plans are figured in (6.8 percent lower for state workers and 7.4 percent lower for local workers).

The study notes that while public employees may appear to earn more than their private sector cohorts (for example in Michigan), when their education is considered they are actually earning less than they theoretically could on the private market. The study found 23 percent of local and state workers have college degrees, compared to only 16 percent of all federal workers.

The average state worker appears to earn more only because the state hires more of those in the highly educated categories that tend to earn more, not because workers with the same education earn more in the public sector.

When public employees do earn high wages and receive great benefits, rather than engendering resentment and jealousy, labor proponents say, these should be held up as examples of the security and quality of life that all working people should enjoy, whether in the public or private sector.

Although a small percentage of public sector salaries may be relatively high, they are doubtless still only a drop in the bucket compared to federal spending on defense, state tax breaks to corporations and the like.

Public servants are convenient scapegoats. Republicans would rather deflect attention from corporate executive pay that continues to rise as corporate profits soar, even as corporations refuse to hire more workers…It’s far more convenient to go after people who are doing the public’s work – sanitation workers, police officers, fire fighters, teachers, social workers, federal employees – to call them “faceless bureaucrats” and portray them as hooligans who are making off with your money and crippling federal and state budgets.

The story fits better with the Republican’s Big Lie that our problems are due to a government that’s too big.

Public employees do periodically make headlines for gaming the system – collecting two pensions simultaneously, collecting a pension while still working a public job, or getting a “promotion” immediately before retirement to boost their pension, for example.

But Reich notes that such pension exploitation is a relative rarity, and most public employees are lucky to collect modest pensions that don’t even cost much to taxpayers. An average government worker who retires with a salary of $45,000 will collect a $19,000-a-year pension, he says—“few would call that overly generous.”

While they’re working, most public employees contribute a portion of their salaries into their pension plans. Taxpayers are directly responsible for only about 14 percent of public retirement benefits. Remember also that many public workers aren’t covered by Social Security, so the government isn’t contributing 6.25 [percent] of their pay into the Social Security fund as private employers would.

CalPERS, the California Public Employees’ Retirement System, describes the reality for California public employee pensions, on a “myth busting” website addressing common misconceptions—including the idea that “public pension benefits are excessive and a drain on the public.”

The average CalPERS pension is about $25,000 per year. Half of CalPERS retirees receive $16,000 per year or less in benefits. Unlike the private sector, many CalPERS members do not receive Social Security, making their CalPERS pension their sole source of pension income, other than savings.

The site also says that: “California public retirees put back $2 into the economy for every $1 they receive in pensions.”

Many Republicans argue that even granting collective bargaining rights to public sector employees is a recipe for financial disaster and endangers the public. Nevada, North Carolina and Arizona are among the states that don’t allow collective bargaining for government employees. Labor advocates argue there’s no reason a right enshrined in labor law and guaranteed to private sector workers should be denied to dedicated public employees. If the right to strike endangers public welfare in any way – for example among firefighters or police officers – they can still be allowed collective bargaining rights with some of the same strike-related caveats that affect workers in private industries from transportation to healthcare.

The NIRS “Out of Balance” study concludes:

Although the current recession calls for equal sacrifice, the long-term pattern indicates that state and local workers are not, on average, overcompensated. If the goal is to compensate state and local sector employees in a manner comparable to those in the private sector, the data do not call for reductions in state and local wages. If anything, they call for increases.

An organization called Brave New Foundation has collected stories of public employees facing layoffs and wage freezes, describing the effect on their own lives and on citizens who need their services. A blogger on the site NewsHound reported:

It absolutely infuriates me the way the right wing is trying to demonize – in an effort to cut back benefits of public workers at the same time that they demand a giant windfall from the public by way of tax cuts for the wealthy.