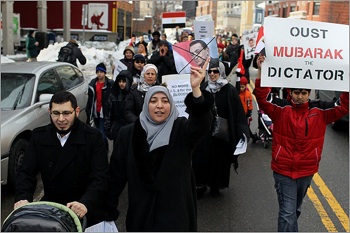 This article was originally published on CommonDreams.org from Huffington Post.

On Saturday, I crossed paths with a few hundred protesters marching from Cambridge to Boston to call for the resignation of Egyptian President Mubarak. By appearance, they were a mixture of Arab-Americans, locals, and people from assorted other backgrounds.

The loud, peaceful march was almost startling, because you hardly see street protests in America these days, even in liberal Massachusetts. The Boston Globe quoted one Egyptian-American woman saying that middle class anger in Egypt has swelled with unemployment and inflation.

“You can’t live a fairly decent life without being rich,” she said.

In 2011, you might say the same about downwardly mobile America.

But where are the protests in our country? Where is the leadership connecting the dots… between the financial meltdown, the record profits and bonuses on Wall Street, the continuing collapse of home equity, the joblessness, and the assault on public services in the name of budgetary prudence?

For the moment, the small amount of citizen protest seems to belong to the Tea Parties. However, the Republican responses to President Obama’s State of the Union address showed a total vacuum of plausible remedies.

Obama’s own address was a blend of this president at his best — invoking the aspirations that we share as Americans, some very nimble packaging of progressive themes in unassailable patriotic language — but combined with a fair amount of needless pandering to the right.

As strategist Drew Westen parsed the speech at a recent conference of progressive Democratic legislators, some passages seized the political high ground and then defined it in a progressive way.

We are the nation that put cars in driveways and computers in offices; the nation of Edison and the Wright brothers; of Google and Facebook. In America, innovation doesn’t just change our lives. It’s how we make a living. Our free-enterprise system is what drives innovation. But because it’s not always profitable for companies to invest in basic research, throughout history our government has provided cutting-edge scientists and inventors with the support that they need. That’s what planted the seeds for the Internet. That’s what helped make possible things like computer chips and GPS.

….. Our infrastructure used to be the best — but our lead has slipped. South Korean homes now have greater Internet access than we do. Countries in Europe and Russia invest more in their roads and railways than we do. China is building faster trains and newer airports. Meanwhile, when our own engineers graded our nation’s infrastructure, they gave us a “D.”

We have to do better. America is the nation that built the transcontinental railroad, brought electricity to rural communities, and constructed the interstate highway system. The jobs created by these projects didn’t just come from laying down tracks or pavement. They came from businesses that opened near a town’s new train station or the new off-ramp.

Pitch perfect. What logically follows from the president’s invoking of the history of American prosperity is a call for more public investment in 21st century infrastructure. This is not in-your-face partisanship, but the astute marketing of a progressive message and ideology that contrasts radically with the conservative one. But then the president said this:

Now that the worst of the recession is over, we have to confront the fact that our government spends more than it takes in. That is not sustainable. Every day, families sacrifice to live within their means. They deserve a government that does the same. So tonight, I am proposing that starting this year, we freeze annual domestic spending for the next five years. This would reduce the deficit by more than $400 billion over the next decade and will bring discretionary spending to the lowest share of our economy since Dwight Eisenhower was president.

This freeze will require painful cuts. Already, we have frozen the salaries of hard-working federal employees for the next two years. I’ve proposed cuts to things I care deeply about, like community action programs.

My friend Westen was incredulous. Why would a Democrat give aid and comfort to a right wing ideology that is also wrongheaded economics? Why sacrifice Medicaid and programs for kids for the sins of the bankers? Why add fuel to the right’s attack on public employees? People watching the speech rightly wondered: How do you freeze domestic spending — and also dramatically increase outlay on 21st Century infrastructure? How do you win public support for more desperately needed public investment when you brag that you will reduce domestic spending to its lowest share of the economy since the Eisenhower years?

In the 2008 election, people with incomes of under $50,000 supported Obama and the Democrats by wide margins. But the kind of mixed messaging in the president’s State of the Union address reinforces political anomalies such as the 2010 mid-term election, where white working class voters supported Republican House and Senate candidates by a staggering margin of 30 points.

The administration’s mixed signals on aid to Wall Street are so potent that in the 2010 election, a majority of voters who blamed the collapse on Wall Street nonetheless voted for a Republican candidate for Congress.

On January 17, the New York Times published a letter to the editor from a woman named Susan Kross, of upstate New York, praising governors for “reining in labor unions.”

The shocker was her concluding paragraph. She wrote, “I was reared on a family farm where pennies were always pinched, every day was a workday, and there was no such thing as a pension or vacations, let alone paid ones.”

Such is the state of ideological muddle and confused self-interest that a hard working rural, middle-class American could disdain pensions and paid vacations as unnecessary luxuries too good for working people. This woman’s family farm, if it has truly been in her family for generations, probably survived thanks to the New Deal. She gets her crops to market thanks to government-subsidized highways, and uses modern farming methods thanks to USDA. Her parents and grandparents, who benefited from Social Security, most likely did not share her contempt for pensions and paid vacations.

This moment cries out for a combination of clear leadership and mass protest.

The protesters shaking the foundations of despotic regimes in the Middle East are a blend of people who want radical Islam in temporary coalition with those who want western-style tolerance, democracy, and a semblance of honest and competent government. They are united only by their disgust with the corrupt status quo. But you have to admire them for acting on their frustrations.

This wave of citizen protest is a reminder that insurgent moments can break out and spread with little warning. But you never know whether a genuine revolution from below leads to a Jefferson, a Mandela, a Havel, a Roosevelt — or a Hitler, Mussolini, or in current circumstances radical Islamists who reject everything secular, tolerant, and democratic about the Enlightenment.

The United States may possess more than half of the world’s arms, but it is powerless to control this kind of popular uprising. As protest spreads and regimes that America propped up are toppled, we don’t know whether the successor governments will be pluralist Muslim democracies like Turkey and Indonesia, radical fundamentalist states like Iran, or military dictatorships.

But half a century of American investment in strongmen like Mubarak to contain popular unrest is collapsing along with his regime, and US influence in the Middle East is very likely to decline.

President Obama took office with more good will in the Middle East than any recent president, just as he kindled a new generation of hope at home. It remains to be seen whether his administration can credibly identify the United States with the aspirations of hundreds of millions of ordinary Arabs, and thereby nudge a turbulent region in the direction of tolerant democracy rather than fundamentalist rage.

It also remains to be seen whether Obama can finally be the ally of drastic reform at home. If not, the domestic rage about the economy will continue to belong to the far right.

It’s great to see Americans demonstrating in solidarity with ordinary Egyptians. But the next time I cross paths with a robust protest march, I’d like to see citizens protesting the wreckage of American prosperity by Wall Street and the too feeble response by our government.

Robert Kuttner is co-founder and co-editor of The American Prospect magazine, as well as a Distinguished Senior Fellow of the think tank Demos. He was a longtime columnist for Business Week, and continues to write columns in the Boston Globe and Huffington Post. He is the author of A Presidency in Peril: The Inside Story of Obama’s Promise, Wall Street’s Power, and the Struggle to Control our Economic Future, Obama’s Challenge, and other books.