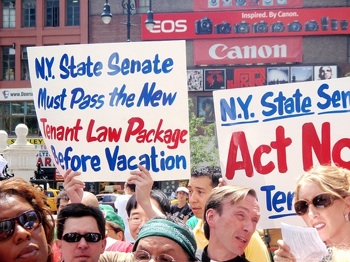 New York State’s rent laws are set to expire June 15. If the legislature renews them without strengthening them, the number of apartments with regulated rents and protections against eviction will continue to erode. If the legislature weakens the rent laws again, as it did when it renewed them in 1997 and 2003, the city will lose affordable housing at an even faster rate.

The tenant movement needs new tactics and strategy. Lobbying the state Senate, its main strategy over the last two years, has failed. Even with a Democratic majority, one that tenants organized and campaigned hard for, the Senate blocked almost the entire tenant agenda. This included the repeal of the 1997 vacancy-decontrol law, which deregulates vacant apartments that rent for more than $2,000 a month, and of the 1971 Urstadt Law, which bars New York City from enacting rent laws stronger than the state’s.

Tenants had believed that Republican control of the upper house was the biggest barrier to strengthening the rent laws, but their efforts were thwarted by corrupt Democrats like the now-indicted Pedro Espada, Jr. and a larger faction that did not want to alienate its real estate financiers. With the Republicans back in power, the Senate will be even less receptive to tenant concerns. It is likely that the real estate lobby will push for further weakening of the laws, such as overturning the court-imposed ban on deregulating apartments that get tax breaks intended for rent-stabilized buildings.

One possibility is that other legislative bodies could get more militant about defending tenants. Assembly Speaker Sheldon Silver has said that renewing and strengthening the rent laws is essential. What if the Assembly refused to pass the state budget until the rent laws were renewed? Yes, the political establishment would hammer them for “holding the state hostage to special interests,” but the alternative is letting real estate multimillionaires buy laws that let them gouge city renters.

Would Silver and the Assembly Democrats be willing to stand up? They have suggested that they may not pass Gov. Cuomo’s proposed property tax cap unless the Senate renews the rent laws and repeals vacancy decontrol. However, only the most naïve would count on them sticking to it.

Cuomo says he opposes linking the two issues, which indicates that he is willing to see any strengthening of rent regulations die in the Senate. He has avoided discussing rent controls, except for vague platitudes about the need to balance tenant protections with a stable real estate market. Real estate interests were the largest single bloc that funded his $34 million campaign. His apparent belief that New York’s worst problems are high taxes, a strong teachers’ union and government workers’ pensions does not inspire much confidence either.

What if the City Council passed an emergency rent-control law to protect tenants in case the state laws expired? That might run afoul of the Urstadt Law, but it could be a backup plan if the Senate refuses to renew the laws without weakening amendments. However, Council Speaker Christine Quinn has never been a particularly militant defender of tenants.

The second possibility is more intense direct action by tenants and their supporters. The most successful civil disobedience in American history has disrupted actual sources of oppression, whether it be 1960s college students sitting in at lunch counters that refused to serve black people or General Motors workers occupying factories in the great sit-down strikes of 1937. Previous civil disobedience by tenant activists has been symbolic and ineffective. The 1997 sit-in outside then-Gov. George Pataki’s Manhattan office, which was held just a few days before the legislature imposed vacancy decontrol, disrupted nothing but traffic on Third Avenue.

In the 1930s, New Yorkers resisted evictions by having protesters force their way back into the evicted family’s home and put their possessions back. If tenants respond to continued rent increases with rent strikes, that kind of self-defense will be essential.

The times call for militancy. In many ways, our government is no longer a functioning democracy, but a vending machine for the wealthy special interests that fund political campaigns. This is particularly true in New York, where real estate interests give politicians more money than any other business does. State legislators have even said that they don’t want to repeal the Urstadt Law because then landlords would give money to the City Council instead!