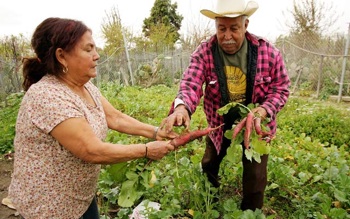 Sprinkled throughout some of America’s blackest, brownest and most distressed communities lies the future of food for us all: urban farms. Initially a response to inner-city decay and the absence of supermarkets in the nation’s poorest neighborhoods, these citified agricultural centers, which range in size from small gardens to entire city blocks, must proliferate beyond the margins in the next few years if working Americans are to guarantee low-cost access to the sustenance they need. That’s because our current system of mass food production and distribution is too dependent on foreign oil and too far from where people live. This is a toxic mix and it is unsustainable.

Dramatic increases in oil prices, forecast for between now and 2020, render coming oil shocks a danger to American diets. Shell oil company believes that traumatic energy events could begin as early as 2015. Adding to the concern, recent unrest in Egypt underscores the international energy network’s exposure to areas of the world set for tremendous change and unforeseen supply disruptions.

As a result, so-called food deserts may soon spread far beyond the neglected black and brown urban neighborhoods where they now predominate. This makes what’s happening in urban farms so important. The people working in these community-wide efforts to grow and distribute their own food, within their own neighborhoods, aren’t just saving themselves; they’re building a model for sustainable agricultural production that will be essential to the entire nation.

Moving farms closer to where the majority of people reside makes sense and is increasingly necessary. Futurists are already planning for it. They know that to secure our food in the time ahead—like suburbanites who adopted jazz, hip hop, rock and roll, and salsa—everyone will soon have to emulate and build upon the innovation of urban farm systems.

The Birth and Growth of Urban Farming

Urban farms began to proliferate in the wake of riots which swept cities in the late 1960s. In a convulsion of rage against police brutality and segregation, neglected communities revolted against the municipalities that contained them. Where buildings once stood, thousands of lots lay empty. In D.C. alone, 1,200 structures were destroyed. Overtime, one by one, individuals took over these abandoned parcels, and brown fields soon turned to green.

Many of the businesses ruined during the riots were food stores. In the absence of outside help in bringing these markets back, urban dwellers, almost all of whom had Southern roots, quickly drew upon their experience and began growing produce themselves. Street by street, year on year their greenfields grew.

Four decades later, these farms continue to flourish and expand. Thirty cities have organized city-farming projects, up from only a handful a decade ago. New York City has 600 urban gardens alone, involving 20,000 residents who participate in maintaining and harvesting them. A movement in Detroit is fighting to create the world’s largest urban agricultural space, Hantz Farms, and LA’s South Central Farmers cooperative is engaged in an ongoing battle to return to the neighborhood which bore its name. Until its eviction by a developer in 2006, South Central Farm was the biggest in the country.

Should the White House get its way, urban food production will become even more common. As a result of First Lady Michele Obama’s campaign against food deserts, urban farms have received renewed attention. Twenty-five million Americans live more than a mile or 15 minute drive from a grocery store. These food deserts are mostly in isolated parts of cities with weak public transport networks. Residents end up relying on processed or fast foods to keep hunger at bay.

Unhealthy food is a key reason that black and brown urban America suffers from staggering rates of childhood obesity, diabetes, hypertension, and heart disease. Public health officials are calling for drastic measures to end the crisis. They see city-based farms as a ready-made solution for the millions who struggle to get the food they need to keep them well.

Urban farms like the one in Bed-Stuy could be essential to feeding millions more people in the next decade. The weak point is oil. Equal to water, soil and seed, oil is an essential ingredient to creating and delivering foodstuffs for the nation’s tables today. But like fresh vegetables in poor neighborhoods, it’s becoming harder and harder to get.

One out of every 10 barrels of oil imported in the U.S. is brought in solely to produce food. Fossil fuel is used to grow, harvest, process, and transport farm products to supermarkets. It takes almost six gallons of oil to fertilize just one acre; the U.S. has close to 220 million acres under cultivation. Oil runs tractors and trucks, which gather the crops at harvest time. Half of all oil used in America’s food system moves food from the fields to market, and then keeps meat, vegetables and dairy fresh enough, long enough for consumers to buy and consume them healthily.

The American food system’s oil dependence is driven by the fact that agricultural centers are too far from the people they serve. Two out of three Americans live in cities or suburbs, but our food comes from remote areas. The average item on grocery shelves travels an astounding 1,500 miles to get there. Ninety percent of the vegetables grown in the U.S. come from California’s San Joaquin Valley. Most of the country’s poultry originates in just four states in the South, and beef from three Prairie states. Many familiar foodstuffs are imported, using even more fossil fuel. Eighty percent of seafood and a third of all fruits come from beyond America’s shores.

In other words, America’s oil addiction extends to the very products that we need to sustain ourselves. Clearly, any spike in oil prices would causes serious hardship. Yet, forecasters estimate that a dramatic increase in oil prices is on the horizon.

Within five to 10 years, oil is likely to reach $150 a barrel—effectively, double what it is today. That could take gasoline to almost $6 a gallon. Wall Street guru Jim Rogers believes that $200 a barrel is more like it. Demand is exploding, supply is tightening, and costs are going up.

The U.S. is the world’s number one consumer of oil. China is right behind, and its fuel consumption has tripled in merely 11 years. China is now the world’s second largest economy (just announced last week), and its growth will accelerate. So will its demand for resources. The biggest oil fields, known as “elephant reserves,” were discovered 40 to 50 years ago. Production from those fields is declining and eventually prices will rise. America’s food network will be increasingly vulnerable as a result.

One response to America’s susceptibility to oil shocks is to move food production closer to where people live. Drastically reducing the distance between consumers and their food would lower costs substantially. Lower prices could soften the blow of price hikes and ensure that food remains at levels that most Americans can afford. It would also have positive health impacts, putting downward pressure on illnesses caused by poor diets, decrease health care costs and improve the quality of life of millions.

Moving agricultural production to cities and suburbs would also dramatically alter the business of farming. Rather than leaving it concentrated in a few large companies based in far away places, food production would be spread throughout a larger segment of society. A greater share of consumers would be more active in generating the nutrients that sustain them. Farms would have to shrink and people would eat less meat. Cattle feedlots that can hold 150,000 animals at one time would not work in urban areas.

Overall, municipalities would develop a direct relationship with their food. As Bed-Stuy Farm shows, this both improves the wellbeing of residents and the community as a whole. But whatever happens the way Americans get their food in the future is set to change.

Sparked by the urban farm movement, a predicted growth of cities, and impending resource crises, futurists are thinking of additional ways to bring agriculture to cities. Vertical farms, for instance, would place the growth of fruits and vegetables in sky scrapers. Several hundred feet high, these buildings would mix people and agriculture. Certain floors would be dedicated to raising food, others to housing people.

Another idea is converting empty warehouses into hydroponic farms. These massive soil-less greenhouses could produce a range of products using far fewer resources. There is even a proposal to convert the roofs of supermarkets into greenhouses. This would create a closed-loop food production system where produce is picked and sold in the same place. The bottom line is that a lot of research energy is going into how we can do things differently.

But the future is actually now. As we seek ways to feed in new ways, policy makers should start by getting behind a homegrown solution already inaction: urban farms. Grown out of crisis, the example of these neighborhood agricultural centers are life rafts that could help us weather the oil-shock-induced difficulties that lie ahead. Despite the choices futurists and leaders make, the rest of us will have to do what those in America’s most challenged communities have known for years: learn how to create, not just consume.

Imara Jones is a New York based blogger who writes about economic justice for Colorlines.com. Read more about his work by reading his author biography.