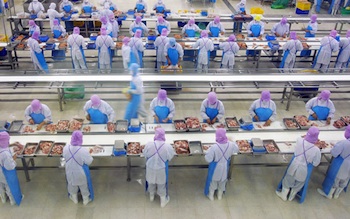 Juan Baten came to this country from Guatemala seven years ago in search of a better life. A bus in Cabral, Guatemala, hit his father so Baten left home at the age of 15, to make the journey north. He made his way to Brooklyn, N.Y., where he found work in a tortilla factory in an industrial corridor along the Brooklyn-Queens border. He worked six days a week, nine hours a day, from five in the evening until two in the morning, operating the machines that churned out tortillas. The $7.25 per hour he earned was sent back to his family in Guatemala, supporting his four brothers.

Baten also found love. Seven months ago, his common law wife Rosario Ramirez gave birth to daughter, Daisy Stefanie. They dreamed of a day when they could move back to Guatemala.

However, one Sunday, Baten’s arm got stuck in the blades of a dough-mixing machine and he was crushed to death. The 22-year-old dad’s story splashed across the pages of the New York tabloids, and his death led to investigations by the federal Occupational Safety and Health Administration and state Department of Labor. The Workers Compensation Board discovered that the factory owner was not offering worker’s compensation to his employees and issued a stop-work order. The factory is now closed, pending payment of insurance and fines by the owner, according to news reports.

Daniel Gross, executive director of Brandworkers International, noted in response to the case that the workers at the tortilla factory were not organized into a union. Neither had the facilities ever been inspected by OSHA prior to Baten’s tragic death. Many more questions remain unanswered: Were Baten and his colleagues adequately trained to use the dangerous food machines safely? Were they given breaks during their graveyard shift? What access to health care did Baten have to ease the fatigue he undoubtedly experienced from working six days a week?

But what we do know is that Baten’s workplace wasn’t unique. Workers suffer from low wages and hazardous working conditions throughout the food chain.

Rinku Sen wrote this week about a series of studies released on Valentine’s Day by the Restaurant Opportunities Center United. The studies describe the conditions for restaurant workers in Washington, D.C., Los Angeles, and Miami. The service and retail sector of the food system pays the lowest wages; restaurant workers earn an average of $15,000 a year and nine out of ten workers lack employer-sponsored health insurance, according to the studies. And workers are forced to labor when sick, therefore further endangering their health and that of the food consumers, too.

The studies reinforce findings from new research by the Applied Research Center, Colorlines.com’s publisher. We recently embarked on a broad survey of the food system, to map out the race, gender and class of workers along the supply chain. Our findings, detailed in the new report “The Color of Food,” were sadly not surprising.

People of color typically make less than whites working in the food chain. Half of white food workers earn $25,024 a year, while workers of color make $5,675 less than that. This wage gap plays out in all four sectors of the food system—production, processing, distribution and service—with largest income divides occurring in the food processing and distribution sectors. Women working in the food chain draw further penalties in wages, especially women of color. For every dollar a white male worker earns, women of color earn almost half of that.

Great advances have been made to ensure that our food is locally sourced and sustainably grown. Communities of color across the nation are taking food production in their hands, by converting abandoned lots in urban deserts into fertile, urban farms and gardens. But a movement for food justice must also encompass the food workers that currently toil in sweatshop-like conditions, the often-invisible labor that help bring our food to the table.