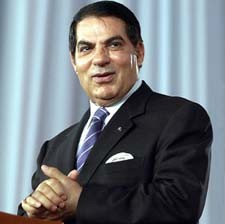 Since the late 1990s the World Bank, IMF, European countries and the United States have singled out Tunisia as a model of economic reform in North Africa. In 2008, for example, the World Bank called Tunisia a “top regional reformer” in easing access to credit and marveled that the Mediterranean nation has doubled its exports of goods and services over the previous decade. IMF President Dominique Strauss-Kahn stated in November 2008 that the “Tunisian economy is going well” and that Tunisia is “good example for emerging countries.” The reality, however, has been much darker.

Following his 1987 coup, which removed “president-for-life” Habib Bourguiba, Zine al-Abidine Ben Ali stamped out the few political and civil liberties that Tunisians had attained. He was a master of staging demonstration elections that returned him to power with more than 90 percent of the vote. The ruling party, the Constitutional Democratic Rally (RCD), won every legislative election in a landslide. Through the party apparatus, the regime carefully tracked the activities of labor unions, student associations, women’s rights groups and media outlets, as well as dictating the content of cultural events.

State surveillance operated at three levels: First, political activists were severely repressed. Tunisia was among the most heavily policed states in the world, with about 100,000 policemen in a country of 10.4 million. Torture of political prisoners has been repeatedly documented and denounced by human rights organizations. Second, the RCD established a complex and pervasive regime of monitoring ordinary citizens, described by the French political economist Béatrice Hibou as a “control grid.” A Tunisian citizen had to take care not to incur the local RCD watchdog’s wrath in order to conduct her ordinary life undisturbed. Officials might otherwise interfere with her enrollment at a university, her exams, her wedding or her desire to open a restaurant or shop, acquire property, give birth in a hospital, obtain a passport or even buy a cell phone. Third, and due to the intrusive state measures, paranoia spread among the populace. After 23 years of internalizing fear, Tunisians became their own censors.

Repression, however, is not the only factor. The longevity of the authoritarian system relied on a combination of coercion and consent, what Hibou, in her book La force de l’obéissance, called a “security pact.” Under the terms of this tacit deal, in exchange for relatively easy access to credit and consumer goods, the Tunisian people were expected to acquiesce to the lack of civil and political liberties.

Credit and consumption were a large part of the “Tunisian miracle.” The regime had compromised the old productive base of the economy by adopting the usual IMF and World Bank recommendations to sell off and downsize public-sector industries and agricultural cooperatives. In its place grew a more contingent economy of textile enterprises and call centers operated by foreign investors, who offered short-term low-paying jobs, and tourist resorts on the country’s sun-splashed beaches. Tourism and call centers, where Tunisians record the orders of Western consumers, are two of the main exports in the World Bank’s accounting. The promise of credit, which as elsewhere was to have aided Tunisians in starting small businesses, has proven ephemeral, in part due to rampant corruption: Persons with connections in high places took the most lucrative opportunities for themselves.

Under Bourguiba there was a strong and dynamic middle class, highly educated and entrepreneurial. The corruption and bad governance of Ben Ali’s reign have contributed to the pauperization of the middle class and the dramatic rise of unemployment. Forty-six percent of youth who have university degrees have no jobs commensurate with their education. The avarice of the president and his wife’s relatives gradually alienated Tunisian and foreign investors, who were tired of paying a tithe to the reigning family and preferred relocating to the more transparent Gulf countries. The so-called economic success story of Tunisia became a nightmare for the Tunisian people.

Nadia Marzouki is a Jean Monnet Fellow at the European University Institute in Florence, Italy.
This article was excerpted from the Middle East Report and Information Project, merip.org.