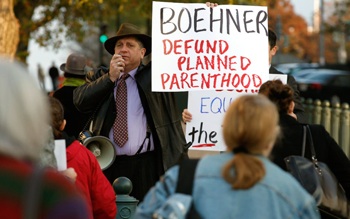 It shouldn’t be a surprise to anyone that the House GOP leadership has come out strong with an anti-abortion agenda only weeks into the 112th Congress. A November meeting foreshadowed the fate of reproductive rights under the House’s new leadership: Randall Terry, an anti-abortion extremist whose work incites violence and has been called “domestic terrorism,” met with soon-to-be Speaker John Boehner’s chief of staff. In the anti-abortion world, it doesn’t get more extreme than Randall Terry.

What’s striking, and drawing less attention, is that the invigorated attack on women’s health on Capitol Hill is just the beginning. The November elections also swept in a wave of anti-choice state governments, where the fight against reproductive rights has become increasingly defined by race baiting meant to divide the pro-choice community.

The national GOP leadership made its reproductive rights agenda crystal clear in the “Pledge to America” unveiled on Sept. 23, just weeks before the midterm election. The new GOP-controlled House may not be living up to the Pledge’s promise to cut the deficit by $100 billion, but when it comes to abortion the Republican caucus is honoring its word. From the Pledge:

Americans are overwhelmingly opposed to using tax dollars to pay for abortion, and the executive order issued by President Obama in conjunction with congressional passage of the health care law is inadequate to ensure taxpayer funds are not used in this manner…. We will establish a government-wide prohibition on taxpayer funding of abortion and subsidies for insurance coverage that includes abortion. This prohibition would go further and enact into law what is known as the Hyde Amendment as well as ban other instances of federal subsidies for abortion services. We will also enact into law conscience protections for health care providers, including doctors, nurses, and hospitals.

HR3, the symbolically important third bill introduced in this session, focuses on fulfilling these promises. Named the “No Taxpayer Funding for Abortion Act,” it is expected to come up for a vote in the House soon, and pro-choice senators are already concerned it could be brought to the floor in the upper chamber as well.

One might assume from the title of the bill that there currently is taxpayer funding for abortion. In reality, this funding is almost non-existent, and has been for 35 years. In 1976, former Sen. Henry Hyde introduced the Hyde Amendment, which effectively stopped the flow of federal money toward abortion. This was the first big legislative response to the Roe v. Wade decision that had legalized abortion just three years earlier. In the 30-plus years since the amendment passed, it has been further strengthened.

Hyde made his own intentions clear as he campaigned for his amendment. He stated: “I would certainly like to prevent, if I could legally, anybody having an abortion, a rich woman, a middle class woman, or a poor woman. Unfortunately, the only vehicle available is the HEW Medicaid bill.” Today, HR3 has similar motives.

As law currently stands, under the Hyde Amendment, women receiving health care through federal programs (like Medicaid, Medicare, Indian Health Services and the military) cannot get coverage for abortion procedures. In this way, the Hyde Amendment has always targeted low-income women’s ability to access abortion via the cost of the procedure—it can cost anywhere from $300 to $3,000. As a consequence, it has also targeted largely women of color. HR3 is an attempt to make these limitations permanent—and expand them to women with private health insurance.

The bill takes a radical interpretation of “federal funding” and expands it to include changes to our tax law. For example, under this bill, if a small business or individual purchased health insurance and the plan included coverage for abortion (regardless if it was utilized) they would not be allowed to deduct the cost of that plan. Currently 86 percent of private insurance plans cover abortion. These changes could have a sweeping effect on that breadth of coverage, working toward Hyde’s mission of preventing anyone from having an abortion.

As is to be expected, HR3 has stirred up significant response from the reproductive rights community. It has also received more attention than usual from the media, thanks to feminist activism against a provision in the bill that some say could have altered the definition of rape. The current funding ban includes three exceptions—or, three cases in which women should be able to receive coverage for their abortions: rape, incest and life endangerment. HR3 made one change to this language, employing the phrase “forcible rape.” This created an outcry about the bill’s attempt to redefine rape, including a #dearjohn twitter campaign spearheaded by feminist blogger Sady Doyle. Sponsors have since agreed to remove the word “forcible” from the bill.

But the fact remains that this legislation is just the beginning of a broader agenda of limiting women’s access to abortion by limiting their ability to pay for it. In reality, very few women are able to get federal funding through the three exceptions currently allowed by the Hyde Amendment. Data on Medicaid-funded abortions is difficult to come by, but we do know that in 2001 only 56 women received federal Medicaid reimbursement for their procedures based on all three exceptions. Even when you include state Medicaid reimbursements, the total number comes to only 81. In 2006, 20 states didn’t fund any abortions at all under these exceptions, according to Ibis Reproductive Health.

So while the outcry about HR3 has focused on the rape-exception language, the real question here is: Why should the circumstances of a woman’s abortion determine her access to it? When you peel back the layers of the new House GOP agenda, it’s clear that the point is to block any access at all.

In fact, while HR3 has been getting most of the media attention, it’s not the only anti-choice bill being considered right now in the House. HR358, the “Protect Life Act,” focuses on restricting access to abortion coverage in the health care reform law passed last year, in addition to beefing up refusal clauses for providers. The most heinous piece of the legislation would seem to allow providers to refuse to do procedures even in emergency situations in which the woman’s life is at risk.

Could such extreme anti-abortion legislation actually get signed into law? It doesn’t seem likely, and these moves are probably just far-right fundraising attempts and efforts to rally the base. But much like the House’s planned hearings on rewriting the birthright citizenship clause and interrogating Muslim Americans about terrorism, that doesn’t mean progressives can afford to ignore them.

The Democrats’ control of the Senate and White House means that many of these bills will go the way of health care repeal—dissolved into the congressional procedural death trap that is bipartisanship. But pieces of these bills can easily get incorporated in other legislation, and they set the terms for the broader policy debate on reproductive rights. Indeed, the amount of support behind HR3 is striking. The bill has over 170 cosponsors, including nine Democrats.

Race and Abortion in the States

Moreover, this is likely only the beginning for the GOP anti-choice agenda. The real battle is happening at the state level. Anti-choice attacks have increased dramatically since President Obama was elected. The Guttmacher Institute reports that in 2010 alone 39 new laws restricting abortion were passed. We can expect this activity to increase dramatically this year as the midterm election brought the number of states with entirely anti-choice governments to 15.

We’re going to see restrictions from every possible angle, including the so-called “race and sex selection” bills. This month, Arizona became the most recent state to introduce this type of legislation, which would require women to sign an affidavit saying that they are not terminating their pregnancy due to the race or sex of the fetus. A similar bill was defeated in Georgia last session, never making it out of a House committee.

These race and sex selection bills are part of a growing meme in the anti-choice movement—targeting abortion as so-called “black genocide,” along with drawing comparisons between abortion and slavery. These messages are not new but they are gaining prominence. There has been a recent media push, including billboards with the message, “Black Children are an Endangered Species” and ads on Black Entertainment Television.

These efforts are clearly an attempt to divide the pro-choice community along race lines in order to further chip away at access to abortion as a whole. When placed alongside ideologies that support restricting social services and assistance to low-income families and families of color, these tactics are revealed for what they are—race baiting and divisiveness rather than a real concern for the lives of black folks.

All of these attacks are united under the banner of trying to eliminate access to abortion entirely. Ohio is planning to introduce legislation this week that would prohibit abortion anytime after the provider can detect a heartbeat—radically reducing the time period available for the procedure. Texas wants to force women to have ultrasounds before the procedure and listen to the heartbeat. These attacks are only going to escalate, putting the pro-choice community on the defensive.

The question remains: Why is this issue, of all the pressing issues of our current moment, dominating the GOP’s agenda nationwide? Jessica Arons of the Center for American Progress has one theory: “Because they have no ideas of substance. They don’t know how to fix the economy, so instead they are trying to create distractions with this political theatre around abortion.”

Miriam Zoila Pérez is an editor at Feministing and the founder of Radical Doula, a blog that lives at the intersection of birth activism and social justice.