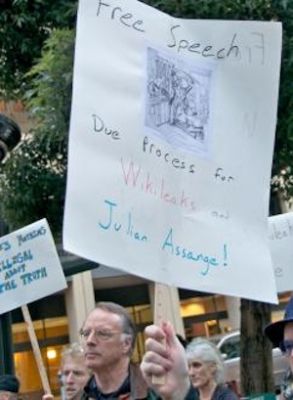 Arguing against his extradition to Sweden, lawyers for Julian Assange appeared in a British court February 7-8 and told a judge that the WikiLeaks co-founder faces a serious threat to his rights if the Swedish government is able to successfully extradite him from Britain.

There will be another day of arguments in court on February 11 before the judge decides on Sweden’s request.

Swedish officials are attempting to extradite Assange, who is wanted for questioning on charges of rape and sexual molestation, but has not been formally charged with a crime. In a defense published online, Assange’s lawyers argued that “there is a real risk that, if extradited to Sweden, the U.S. will seek his extradition and/or illegal rendition to the USA, where there will be a real risk of him being detained at Guantánamo Bay or elsewhere.”

The mainstream media in the U.S. claimed this was exaggeration–but the risk can’t be taken lightly. American politicians from both parties have called Assange a “terrorist” and called for him to be jailed under the Espionage Act. Several openly stated that he should be executed.

Assange’s lawyers argued that the issuing of a European arrest warrant last year was improper since Assange has been not formally charged in Sweden. “It’s improper to use the European arrest warrant for questioning,” lawyer Mark Stephens told Bloomberg News. “They’re only used when someone is a fugitive from justice or the person has been charged, and they’re wanted for a trial.”

According to Bloomberg: “Such warrants are difficult to fight, and Sweden may have given Assange a rare defense by seeking to detain him in the U.K. before charges were filed, perhaps because they were under pressure from the U.S.”

In court, Sven-Erik Alhem, a former chief prosecutor in Sweden who testified on Assange’s behalf, said prosecutor Marianne Ny “should have made sure Assange was able to give his version of events in detail” before issuing an international warrant. He also said there’s no reason why Assange can’t be questioned in Britain–something that Assange has offered to submit to repeatedly, at either Scotland Yard or the Swedish Embassy in London, say his lawyers.

Rape and sexual assault are serious issues, but it’s impossible to take the allegations against Assange at face value, given the circumstances of the case and the attack on him by the U.S. government.After an initial investigation, a Swedish prosecutor refused to bring charges against Assange, stating publicly that he was not wanted for rape. It was only after intervention by a prominent Swedish politician that a second prosecutor, Ny, re-opened the case.

According to reports, Assange remained in Sweden for more than five weeks after the initial allegations were made against him. Repeated attempts by Assange to meet with Ny failed, his lawyers say. Ny reportedly then granted Assange permission to fly to London–but later issued the European arrest warrant.

Unfortunately, the defense of Assange against the threat of political repression has been undermined by sexist assumptions voiced by some supporters and Assange himself–from author Naomi Wolf mocking the alleged victims as “scorned women”; to other supporters questioning the two women’s motives without any real evidence; to Assange, who said in an interview with The Australian that “Sweden is the Saudi Arabia of feminism” and “I fell into a hornets’ nest of revolutionary feminism.”

These statements should be rejected outright–as should the decision by Assange’s lawyers to try to smear the Swedish legal system as excessively responsive to feminists.

In court, Assange’s lawyers called Brita Sundberg-Weitman, a Swedish former judge, to testify. Sundberg-Weitman painted Marianne Ny as an overzealous women’s rights crusader with a bias against men. “I think she is so preoccupied with the situation of battered women and raped women that she has lost balance,” Sundberg-Weitman stated.

Far from being a feminist utopia, Sweden has both one of the highest per capita rates of rape in the European Union and one of the lowest prosecution rates for rape.

Assange’s lawyers also reportedly presented testimony from a blogger who said that one of the alleged victims had deleted Twitter messages about Assange posted after the sexual assault allegedly took place, in which she gave the impression of being happy in Assange’s company. This line of argument amounts to claiming that the two women could not be victims of rape because they “didn’t act like rape victims”–a familiar line that should be rejected.

We reject those terms. Slandering the women involved in the case–along with anyone who expresses concern about the allegations they made–weakens the attempt to defend Assange from the threat of state repression.

But anyone who counts themselves on the left must also recognize the completely cynical way that these allegations are being used to try to get Assange into the hands of the U.S. government.

Beyond the issue of the timing of the warrant for Assange, there is the question of the political pressure the U.S. is bringing the bear on Swedish officials to pursue the charges against Assange.

As one Swedish reporter told journalist John Pilger, “Documents released by Wikileaks since Assange moved to England…clearly indicate that Sweden has consistently submitted to pressure from the United States in matters relating to civil rights. There is ample reason for concern that if Assange were to be taken into custody by Swedish authorities, he could be turned over to the United States without due consideration of his legal rights.”

This is not an overblown concern. As Pilger points out, according to WikiLeaks documents, in 2007, Sweden revoked the political refugee status of two Egyptian men, Ahmed Agiza and Mohammed al-Zari, and handed them over to the CIA agents at Stockholm airport, where they were then flown to Egypt and tortured–after the U.S. threatened to impose a trade embargo against Sweden.

In the U.S., Assange has basically been declared Public Enemy No. 1. A U.S. grand jury has reportedly already been empanelled in Virginia to hear evidence of “espionage” against Assange, although it is not known if an indictment has been returned.

We should be skeptical when political leaders who care little about women’s rights in the best of times are suddenly eager to take up the cause of the alleged victims in the case. Instead, they are continuing a long tradition of rape and sexual assault being used to advance a political agenda that has nothing to do with women’s rights.

None of these institutions–British courts, Swedish prosecutors, Swedish courts, U.S. grand juries–can be trusted to judge the facts of the allegations, even if they were formally made.

The media frenzy around the case adds more reason to be suspicious about the stated reasons for Assange’s detention and possible extradition. Much of their coverage has focused on alleged salacious details leaked by prosecutors and police, plus speculation about the psychological makeup of both Assange and the alleged victims–and almost none focuses on the threat of repression Assange faces.The smear campaign has reached incredible lows. CNN, for example, ran a headline about Assange’s extradition stating “Julian Assange and Hosni Mubarak take steps to stay where they are”–as if Assange has anything to do with a U.S.-backed dictator.

Time magazine’s Eben Harrell laughed off the idea that Sweden would turn over Assange to the U.S., writing, “[W]e at NewsFeed find it a bit far-fetched to imagine the CIA storming across the tarmac at Stockholm’s cozy Arlanda Airport with dark hoods, powerful sedatives and a private jet at the ready. Nor do we find it likely that Sweden, a country with no death penalty, would extradite Assange to the U.S.”

Except, of course, that’s pretty much exactly what happened when Sweden bowed to U.S. pressure and turned over Ahmed Agiza and Mohammed al-Zari to CIA agents at Stockholm airport. According to Human Rights Watch:

[T]he two men were apprehended and physically assaulted by Swedish police; handed over to the custody of hooded U.S. operatives at Stockholm’s Bromma airport who cut off the men’s clothing and blindfolded, hooded, diapered and drugged them; and then transported aboard a U.S. government-leased Gulfstream jet to Cairo. The involvement of the U.S. in the men’s transfers has since been confirmed by the Swedish government.

Sweden reportedly turned over the two men after “written assurances from the Egyptian authorities that they would not be subject to the death penalty, tortured or ill-treated, and would receive fair trials.” The two were subsequently tortured, and Agiza remains in prison after a sham of a trial.

If Swedish officials were ready to accept such assurances from the regime of Hosni Mubarak, it’s hard to believe they would pause at handing Assange over to the world’s greatest superpower.

In reality, the willingness of Assange and WikiLeaks to expose the criminal actions of the U.S. government in Iraq, Afghanistan and elsewhere is the real reason Assange has been painted as guilty by much of the U.S. mainstream media.

A hit piece by New York Times Editor Bill Keller is indicative of the media attitude. Keller’s disdain for Assange leaps off the page, including repeated attacks on Assange’s physical appearance and personality–even the cleanliness of his socks.

The clear aim is to mark Assange as separate from the “legitimate” press–like Keller and his paper. As Coleen Rowley wrote in the Huffington Post:

Can “shooting the messenger” reach any lower depths than Keller’s disdain for the brainy, but allegedly dirty-socked Assange?

Removing all the irrelevant belittlement, Keller apparently views Assange as little more than a difficult “source,” not someone engaged in “real” journalism. Keller’s long-winded article reads like a sadly typical maneuver common among Establishment journalists who try to place themselves under the safe umbrella of the First Amendment while leaving “whistleblowers” out in the stinging rain.

It goes without saying, of course, that Keller neglects to mention his own cheerleading in support of the 2003 invasion of Iraq–particularly noteworthy considering the role of New York Times reporter Judith Miller in repeating the lies of anonymous Bush administration officials when it came to Iraq’s supposed “weapons of mass destruction.”

Through his work with WikiLeaks, Assange has helped to expose not only the criminal actions of the U.S. government, but the stunning complicity of the U.S. media. The U.S. should not be allowed to get its hands on him.