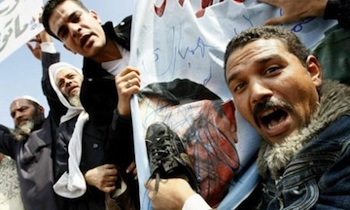 They weren’t the first to make headlines in Tahrir Square, but Egypt’s labor movement made an impressive debut this week in cities around the country. Workers from an array of industries launched demonstrations and wildcat strikes, shaking up some of the country’s key industries and defying the state-run union system.

Egypt’s working class has historically been contained by the government-controlled the Egyptian Trade Union Federation, which is known for undermining autonomous workers’ movements. But independent labor organizing has become a vital presence in Egypt’s streets in recent years, and the movement that erupted with the January 25 demonstrations, while not explicitly labor-led, continue the populist legacy of past labor actions.

A manifesto posted by the independent labor advocacy group Center for Trade Unions and Workers’ Services hails a united front for basic rights and freedoms long denied Egyptians from all walks of life:

For years, we have been demanding for decent wages that are enough … to meet our children’s needs for decent humane housing, the right for medical treatment and medical care that cures and does not kill .. and for them (the leaders) their ears no longer function (they cannot hear us anymore)….

Then, there was the youth’s revolution, our sons and daughters who have refused a life of humiliation. They have refused life under the humiliation of unemployment, and the silence of oppression … they went out to the streets and with them all sectors of the Egyptian people … our sons and daughters who have faced the live bullets with their bare chests and at a minimum 300 of them have fallen as martyrs.  300 young persons have paid with their lives as a price for our freedom and to free us from the humiliation of slavery that we suffer from.  And now the road, the path is open for all of us….

Freedom is not just the demand of youth only … the change of the regime that has oppressed and manipulated us is not just a demand of the youth alone …we want freedom so that we can express our demands and rights … so we can find a way to monitoring our resources (wealth of our country) and the result of our hard work that is being stolen … so that we can re-distribute with some sense of justice … so that varying levels/sectors/classes of society who have been put down/oppressed can get more of what it is owed to them so that they are at least not suffering from the evil of hunger anymore and what comes next of pains from illness.

The Western media has been smitten with Cairo’s Twitter and Facebook vanguard, but it’s clear that the revolutionary fervor isn’t limited to liberal students and actually stems from the hardships that workers and their families face each day.

Samer Shehata, professor of Arab Politics at Georgetown University’s Center for Contemporary Arab Studies, told In These Times that although the labor strikes have centered on issues like wages and benefits, “In authoritarian contexts, all protest is political, even if it’s protest that is supposedly about ‘bread and butter’ issues.”

With protests escalating in the wake of Mubarak’s infuriating Thursday speech, Shehata added, “it’s likely that labor action is going to lead to direct political action on the part of workers or increased political demands,” including structural political reforms.

Moreover, the educated pro-democracy youth organizers have also been motivated in large part by economic frustration; like many of the disgruntled laborers, they blame the lack of meaningful job opportunities on an unresponsive and corrupt ruling class.

Though various groups of workers have over the years waged successful protest campaigns for wage increases—and in 2008, the official recognition of an independent union of property-tax collectors—even professional organizers seemed taken aback by this week’s labor demonstrations. CTUWS coordinator Rahma Refaat told the Wall street Journal that while the group had been tracking and helping to facilitate worker actions, “we did not expect that it would be everywhere like this. Every hour we hear about a strike in another place.”

The strikes and sit-ins this week show that the revolution has rippled far outside the symbolic “epicenter” of Tahrir Square, and will only expand further now that Mubarak’s outrageously Orwellian speech seemed to reiterate his determination to cling to power (update: Mubarak is reportedly stepping down).

According to Al Jazeera, “around 20,000 factory workers stayed away from work on Wednesday.” Then some 24,000 workers at the Misr Textile and Spinning Company in El Mahallah (an historic hotbed of labor unrest) went on strike to demand a wage hike, reports CTUWS:

Morning shift workers have joined the others of the night shift and gathered together in front of the management building, announcing their strike against low wages, high prices, and deterioration of Egyptian workers’ life standers, in particular, and Egyptian citizens in general. They chanted “put your hand with my hand to defeat the thieves gang”, referring to Egypt’s stolen fortunes. However, the company security chained the gate to prevent workers from getting in or out.

Similar demonstrations took place in the city of Helwan, where workers at textile, coke and cement companies rallied to demand paid holidays, health care and permanent positions for contract laborers.

Other actions around the country reported by Ahram Online include protests by nurses at Kafr El-Zaiat hospital, Suez Canal laborers, and workers at a Schweppes factory.

In the Guardian, Eric Lee and Benjamin Weinthal compare the role of labor in the Tunisian and Egyptian revolutions, pointing out that Tunisia’s labor movement, despite years of suppression, “played a kingmaker role” after Ben Ali’s ouster as opposition groups framed the new interim government. Egypt’s independent union activism has been relatively diffuse, but the salience of labor in both countries lies in the coalescence of aspirations for both economic and democratic change. Lee and Weinthal say that going forward, the unions must remain as independent as possible of both the state and Islamist factions.

But the strikes also create fresh space for international cooperation, which is starting to emerge with solidarity campaigns by the International Trade Union Confederation and the AFL-CIO, as David Moberg reported Thursday.

The real question of international cooperation and help will come in the coming period after Mubarak, in which there’s no longer simply a single state union that controls and coopts workers rather than representing their rights. I think that’s when the international labor movement can play a very important role with regards to organization, models of organization, training, collective bargaining programs, writing of labor laws, and so on.

The direction of the so-called leaderless movement is still evolving, but this week’s strikes show that the movement continues to gather momentum and broaden its scope. Neither the intransigent octogenarian ruler, nor the White House’s quavering diplomacy, nor even the traditional opposition forces who haphazardly followed the demonstrators into the streets, have shown even a fraction of the dignity, nimbleness and cohesion that has animated the protesters across the country.

Rallying in the streets, walking off the job, or blocking traffic, Egypt’s labor and youth movements converge on a single struggle: they’re not just crying out for change, they’re creating it.