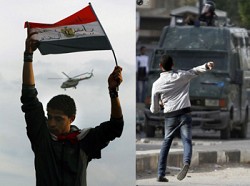 The sky is bright over northern Africa, not only because of the burning government buildings and police stations, but because of the new dawn of mass struggle and potential liberation. Since Jan. 14, less than three weeks ago, the Ben Ali dictatorship in Tunisia has fallen and its successor regime has been shaken up several times, the Mubarak dictatorship in Egypt has suffered a mighty blow from ever-growing protests seeking the president’s downfall, and more restrained demonstrations have started against the Saleh dictatorship in Yemen. The situation changes hour by hour and people all over the world hope for the protesters’ success. Here are a few notes in summary form.

1. It Can Be Done. No one would have said in December that the people would rise up, destroy one dictatorship, and threaten a second. The Tunisian overturn started with the protest by suicide of a single street vendor. Tens of thousands of ordinary people—workers, students and graduates, neighborhood residents, caravans from provincial cities—brought the government down within a month. Ordinary working and poor people, invisible and despised in “normal” times, are in fact the decisive force in history. Without their actions all reforms turn out empty. When they act, they can shake heaven. And they can win.

2. The Nature of the Regimes. All these regimes have some trappings of democracy but are actually brutal dictatorships. In Egypt, for example, there are some carefully monitored “opposition” parties while most opposition groups are banned. The army and its intelligence apparatus dominate and those who dare to oppose the regime are routinely arrested, beaten, tortured, and killed. People suffer from massive unemployment (including and in particular young college graduates, such as engineers), severe shortage of affordable housing, and the callousness of a government bureaucracy that is viciously corrupt at all levels.

Meanwhile, the ruling elite, Mubarak and his family and allies, enrich themselves at the people’s expense. These regimes are every bit as brutal and undemocratic as the Islamic regime in Iran, but because they are allies of the United States and key props of U.S. strategic interests, such as control of oil, of the sea lanes, and the Suez Canal, and support to Israel, the U.S. accepts and covers for their violence, lack of democracy, and violations of human rights. The U.S. provides $1.3 billion in aid to Mubarak’s regime, most for military purposes, and has particularly close ties with the military and the intelligence apparatus.

3. The Broadest Demands Are the Best. The demands in Tunisia and Egypt are for the end of the regime, for democratic freedoms, for elections, no repression of opposition, rule of law, an open society. In the present moment opening up these closed regimes to create a civil society with universal human rights is a decisive step forward. This demand can—and should—unite nearly everyone.

At the same time, while the immediate goal is to get rid of the regimes and to win democratic freedoms, the movement should not limit itself to these goals. Under the lack of rights is the lack of opportunity. Joblessness, oppression, and a deaf officialdom are all reasons why Mohamed Bouazizi set himself on fire. Jobs, aid for the poor, affordable housing, education, cutting government bureaucracy and the military, freedom of migration, freedom to work and trade are all broad demands that the protests should adopt.

4. The Broadest Organization Is Best. The protests began without much organization and spread by cellphone, Facebook, and Twitter. The lack of “vertical” organization—hierarchical organizations with leaders and chains of command—is a shield against repression and means the militancy can spread at ground level.

As part of this, working and poor people need their own organizations which will be different from organizations of the professionals and political parties, who have different interests. If everyone is organized, the chances of the present regime or a successor regime solidifying power are lessened.

5. Win Over the Soldiers, Bring Out the Neighborhoods and Factories, Involve the Unions. To win and continue the revolution all these groups are crucial. After a collapse of police power in Cairo, Alexandria, Suez and elsewhere, and some fraternizing between soldiers and demonstrators, today’s reports (Jan. 30) are that Mubarak’s elite troops are reinforcing the capital, and no doubt other cities. Major confrontations are ahead. The maximum presence of workers, neighborhood residents, and civil, labor, and religious organizations will be necessary to win the battle for the soldiers’ loyalty.

6. Continue the Mobilization. In Tunisia when Ben Ali fled, his prime minister took over. Then he included a few opposition leaders in the “government”—in reality not a government but a clique trying to become one if the people would go home. They didn’t, and kept up the pressure. Now all Ben Ali’s ministers are gone except the ex-prime minister himself. In Tunisia and in Egypt if Mubarak is driven out, the remnants of the old regime will attempt to resolidify power and continuing mobilization is needed to prevent this.

At the same time, revolutionaries shouldn’t disregard or oppose calls for future elections but should join in the calls and welcome elections even if a new elite government results. If there are civil liberties and the civil organizations to back them up, there will be more room for revolutionaries to organize. There will be a struggle in the future to hold onto the rights won in battle and for this, too, continuing mobilization will be needed.

7. Don’t Trust the Opposition; Don’t Fear It Either. Existing opposition groups are only too anxious to get into office, as in Tunisia, and create a democratic-appearing system in which they share power. The moment they take government office, they separate themselves from the people. At the same time, the West is raising the specter of Islamic fundamentalism and its disregard of civil, women’s, and religious freedoms, as a reason to fear truly open democracy. There is always a danger that if the popular tide recedes, a disciplined elite will gain power. But the answer to both threats is organization, more organization, and yet more organization. If large-scale organizations of citizens are built and remain vigilant, these threats can be defeated.

8. A Word on Islam. The mass of the people are not Islamic fundamentalists. But in their vast majority they are devout Muslims. There are no more stirring photographs from these events than those showing massed hundreds bent in prayer confronting the tanks of the dictators.

9. The United States Under Obama Remains the United States. U.S. Secretary of State Clinton insulted the people of Tunisia, Egypt, and Yemen in calling for “stability” when so many have died for a greater goal, freedom, and U.S. President Obama insulted them again in his speech of Jan. 28 in reiterating that the U.S. “has a close partnership with Egypt” (that is a threat as well as a promise!) and that he is still working through Mubarak and asking Mubarak for “concrete steps” to a “better” democracy. In reality the United States has been the best friend of all three countries’ dictators and their police states.

The U.S. talks democracy but hates and fears real democracy. It hates and fears a truly open political process that could reduce its own control and could challenge its economic interests. As slippery as an eel, the U.S. will use both trickery and false promises to back up dictators, switch sides when inevitable, get behind a new government and make sure it serves the U.S. and not its people. The U.S. will be glad, not sorry, if a new regime with a democratic front and a strong secret police solidifies power. Continuing mobilization is also the way to defend national independence against the U.S.

10. The “Northern Crescent” and the “Southern Crescent.” Israel uses these terms to refer to Iran, Syria, and Lebanon on its north, and the pro-U.S. dictatorships in Arabia and across northern Africa on its south. Today the “southern crescent” is shaking. If revolutions can succeed there, the people will also be emboldened in the “northern crescent.” And without strong pro-U.S. regimes to provide cover and assistance, Israel’s continued occupation of the West Bank and its domination over Palestinians in Israel will be less secure.

I don’t know where all this will end—with broader rights or new regimes in Iran or Syria, with a two-state compromise, a binational state, or a nonsectarian democracy in what are now the truncated Palestinian lands and Israel. Maybe nothing at all will happen, but I think change in Tunisia and Egypt opens the way to change all across the region.

11. Why Not Here? My friend Nicholas Powers recently wrote a fictional counter-history of the last two years, “The History of a Dream,” for the Brooklyn-based newspaper The Indypendent (www.indypendent.org/2011/01/20/the-history-of-a-dream). In it, those who favored universal health care began a countermobilization in 2009 as soon as the right began fighting Obama’s health plan. By 2011, these mobilizations had grown into a mass movement threatening Wall Street.

Why not? No one is imagining a revolution in the U.S. today. But we can stop waiting for a falsely liberal government to bring reforms to us and can mobilize to seek them ourselves. Everybody knows the things working and poor people in the U.S. need. It can be done.

12. About Anarchism. Revolutionary anarchists have our own aims and hopes. We hope for working and poor people and all other insulted and oppressed people to organize and remain organized, to remove all elites from power, and to self-govern society without a repressive state. We don’t favor what is falsely termed democracy, a representative government with a consensus for class oppression and a well-organized police, bureaucracy, military, and prisons. But we don’t fear these things either. I believe that with our hopes held high we should favor every step toward a civil society with rights for all. If real freedoms and genuinely open elections come, these will provide the best possibility of spreading anarchist ideas.

13. Tomorrow’s Sky Is Bright. The Utopian No. 2, in 2001, under the heading “Who We Are,” wrote, “This is a good time to publish a journal dedicated to utopianism and revolutionary anarchism.” The article summarized several reasons why—the development of some popular struggles, a decline in influence of the Marxist left, new recognition of women’s, homosexual, and Native rights, and others. It was a good article and we have reprinted it in each issue since.

But one thing was missing to realize the vision: the self-empowered, broad-scale, ground-level radical and revolutionary organization of poor and working people, such as has now begun in at least one corner of our teeming earth. Without this only preliminary work is possible and with it anything is possible, though scarcely assured. Tomorrow’s sky is bright.