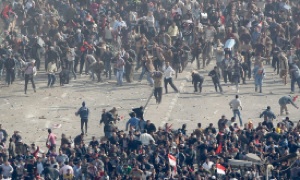 Clashes have broken out between pro- and anti-government demonstrators in the Egyptian capital Cairo.

Protesters from both sides threw stones at each other in Tahrir Square, the epicentre of ongoing opposition demonstrations against President Hosni Mubarak for the past nine days.

Al Jazeera correspondents, reporting from the scene, said that more than 500 people had been injured in Wednesday’s clashes that are still continuing.

One of our correspondents said the army seemed to be standing by and facilitating the clashes. Latest reports suggest that the centre of the square is still in control of the protesters, despite the pro-Mubarak supporters gaining ground.

Witnesses also said that pro-Mubarak supporters were dragging away protesters they had managed to grab and handing them over to security forces.

“There are no ambulances in sight, and all we are using is Dettol,” she said. “We are all so scared.”

Aisha Hussein, a nurse, said dozens of people were being treated at a makeshift clinic in a mosque near the square.

She described a scene of “absolute mayhem”, as protesters first began to flood into the clinic.

“People are coming in with multiple wounds. All kinds of contusions. We had one guy who needed stitches in two places on his face. Some have broken bones.”

Meanwhile, another Al Jazeera correspondent said men on horseback and camels had ploughed into the crowds, as army personnel stood by.

At least six riders were dragged from their beasts, beaten with sticks by the protesters and taken away with blood streaming down their faces.

One of them was dragged away unconscious, with large blood stains on the ground at the site of the clash.

The worst of the fighting was just outside the world famous Egyptian Museum, which was targeted by looters last week.

Al Jazeera’s correspondent added that several a group of pro-government protesters took over army vehicles. They also took control of a nearby building and used the rooftop to throw concrete blocks, stones, and other objects.

Soldiers surrounding the square took cover from flying stones, and the windows of at least one army truck were broken. Some troops stood on tanks and appealed for calm but did not otherwise intervene.

Many of the pro-Mubarak supporters raised slogans like “Thirty Years of Stability, Nine Days of Anarchy”.

Al Jazeera’s online producer in Cairo said rocks were continously being thrown from both sides. He said that though the army had put up barricades around the square, they let the pro-Mubarak supporters through.

Al Jazeera’s Jane Dutton, also in Cairo, said that security guards have also been seen amongst the pro-Mubarak supporters, and it may be a precursor to the feared riot police arriving on the scene.

Dutton added that a journalist with the Al-Arabiya channel was stabbed during the clashes.

Fighting took place around army tanks deployed around the square, with stones bouncing off the armoured vehicles.

Several groups were involved in fist fights, and some were using clubs.  The opposition also said many among the pro-Mubarak crowd were policemen in plain clothes.

“Members of security forces dressed in plain clothes and a number of thugs have stormed Tahrir Square,” three opposition groups said in a statement.

“I’m extremely concerned, I mean this is yet another symptom, or another indication, of a criminal regime using criminal acts,” ElBaradei said.

“My fear is that it will turn into a bloodbath,” he added, calling the pro-Mubarak supporters a “bunch of thugs”.

But according to state television, the minister of interior denied that plain clothes police had joined pro-Mubarak demonstrations.

Elbaradei has also urged the army to intervene.

“I ask the army to intervene to protect Egyptian lives,” he told Al Jazeera, adding he said it should intervene “today” and not remain neutral.

“It is not the first time the Mubarak government has provoked clashes to quell protests, but if it truly is orchestrated, this is a cynical and bloody approach,” she said.

“The army look to be not intervening at all, and the question remains as to whether they have been ordered not to step in.”

The army has told state television that citizens should arrest those who have stolen military clothing, and to hand them over.

Despite the clashes, anti-government protesters seeking Mubarak’s immediate resignation said they would not give up until Mubarak steps down.

Khalil, in his 60s and holding a stick, blamed Mubarak supporters and undercover security for the clashes.

“But we will not leave,” he told Reuters. “Everybody stay put.”

Mohammed el-Belgaty, a member of the Muslim Brotherhood, told Al Jazeera the “peaceful demonstrations in Tahrir Square have been turned into chaos”.

“The speech delivered by President Mubarak was very provocative as he used very sentimental words.

“Since morning, hundreds of these paid thugs started to demonstrate pretending to be supporting the President. Now they came to charge inside Tahrir Square armed with batons, sticks and some knives.

“Mubarak is asking the people to choose between him or chaos.”

Ahead of Wednesday’s clashes, supporters of the president staged a number of rallies around Cairo, saying Mubarak represented stability amid growing insecurity, and calling those who want his departure “traitors.”

“Yes to Mubarak, to protect stability,” read one banner in a crowd of 500 gathered near state television headquarters, about 1km from Tahrir Square.

A witness said organisers were paying people $17, to take part in the pro-Mubarak rally, a claim that could not be confirmed.

Other pro-Mubarak demonstrations occurred in the Mohandeseen district, as well as near Ramses Square.