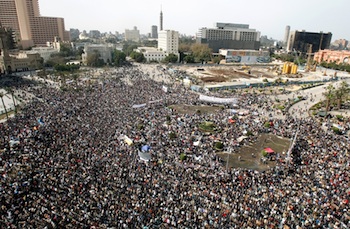 While the protests in Egypt are being widely reported on all the networks and the blogs and online news commentators are firing at all speeds, there has been a tremendous lack of reporting, particularly in the mainstream media, on the positive role religion and faith has had in the uprising in Egypt.  Some of the best coverage I’ve seen has come from Religion Dispatches, but there has not been much.  It has been clearly articulated that the Egyptian Revolution is not a religious movement in the sense that a radical Islamist regime is calling the shots and seeking power.  See Reza Aslan’s recent piece in The Washington Post that disputes the American political and media establishments’ contention that the Muslim Brotherhood is orchestrating an overthrow of Egypt.  But in a country that is 90% Muslim and 10% Christian and the fact that the largest protests are happening on Fridays, the day of prayer known as Salat AlJumu’ah in Islam, one must not overlook the important role religion is playing in the pro-democracy movement – and not because of fundamentalism.

As Slavoj Žižek and Tariq Ramadan point out in their recent, lively discussion on Al Jazeera, the revolt in Egypt is not to be reduced to the incompatible polarities of secular liberalism or fundamentalist Islam.  This is about freedom from tyranny – whether the rule be religious or otherwise.  The stoked fears of a radical, Islamist agenda being ushered in by the Muslim Brotherhood are perpetuated by those who seek to maintain the status quo of Mubarak’s Egypt that readily humbles itself as the U.S.’s third largest recipient of aid (behind Iraq and Israel, respectively).  Žižek indicts the western liberals for their back-peddling of supporting the pro-democratic movements that have any tinge of Islam.  The message from the streets of Egypt and the intellectual Left representative of Ramadan (whose grandfather founded the Muslim Brotherhood) and Elizabeth Shakman Hurd: Democracy and Islam are compatible.

Some of the most successful, long-term nonviolent social movements either started in or relied upon the grassroots base of faith communities.  Gandhi appealed to his own Hindu sisters and brothers; Dr. King and the Civil Rights Movements to the Christian churches; much of the Central American resistance in the 1980s was happening in Catholic base communities.  It would be interesting to see how much of the protesters inspired to risk their lives for freedom and democracy are influenced by their religion or faith.  Photos of Christians protecting Muslims during the daily prayers are an inspiring example of real interfaith dialogue and action – the kind that makes a movement hard to break.  The Muslim Brotherhood calling for the protection of Christian churches should quell whatever nascent doubts observers worldwide have about the authenticity of this revolution.  Not only is democracy compatible with Islam, but apparently it (both democracy and Islam) can tolerate Christianity.  And perhaps that is what Israel finds so threatening about this movement – nonviolent solidarity for the oppressed peoples of the Muslim world is growing and so are its allies.