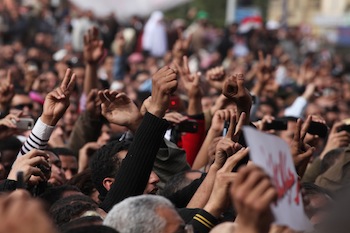 CAIRO—As much as the Egyptian military would like it otherwise, recent days have shown that they are a long way from exerting control over the country’s affairs. The Egyptian people are not quite ready to put their dreams for a better future on hold, or have their pent-up frustrations put back into a box.

Certainly not since the people just toppled a dictator thought invincible only a few weeks ago.

The street protests centered in Cairo’s Tahrir Square have now spread all across Egypt, as labor unrest grows. Thousands of workers belonging to local units of the government-controlled Egyptian Trade Union Federation (ETUF), who largely work in the public sector, are even striking and protesting, right alongside their unorganized brothers and sisters in the private sector.

In addition, new independent unions are forming. The latter are determined to be democratically controlled by their members instead of by a government and state constitution that only recognized unions considered reliable and obedient to the ruling politicians.The numerous strikes and protests are telling us that the people are not finished speaking. In the current climate, there is no question their voices will not easily be silenced by military threats to ban strikes, demonstrations and even unions themselves.

It’s not hard to understand why. Egypt’s workers have suffered enormously under the country’s long-standing neo-conservative economic policies of privatization and elimination of state social subsidies. The United States government, the International Monetary Fund, and the World Bank have promoted these policies since the days of Anwar Sadat, Mubarak’s predecessor.

As a result, there has been a tremendous growth in informal sectors of the economy where workers have no rights, no benefits and no contract rights. One young man I met at downtown Cairo, Said, was working in this unrecognized part of the economy. He was an English teacher by day, but had to work evenings as a street vendor with his friends, other teachers I also met, to supplement his 280 Egyptian pound (less than $50) monthly salary.

This is not a unique example; actually, it is quite normal. According to the AFL-CIO, 40% of Egyptians barely exist on $2 a day. This explains the startling statistic that between 2004 and 2008 there were some 1900 work stoppages and other forms of protest in Egypt involving 1.9 million workers. Obviously, the national uprising against Mubarak was a long time in the making.

Understandably, with events moving so rapidly beyond Tahrir, I wanted to see if military efforts to clear the square of all protestors signaled a downturn in the movement.

So, I woke up early on Monday morning, February 14, and hurriedly rushed to Tahrir, a 20-minute walk from my hotel through downtown Cairo, past the central Court Building (now open) and past the revered Egyptian Museum (still closed and guarded by the military).

Only the day before, thousands were still assembled in Tahrir despite warnings from the army to leave the area. But, as I got closer, I could not believe my eyes. For a moment I actually had a difficult time getting my bearings. On the previous two days after arriving in Cairo, I just followed tens of thousands all heading in the same direction and all arriving at the same location-a metaphor for the immense unity of a nation.

Now, remarkably, overnight, the center of Tahrir Square was completely empty. All the protestors were gone, the tents and medical triage centers torn down and all the makeshift barricades removed. In their place in the center of the square hung a very large banner reading: “Egypt is Now Happy!”

A few dozen smartly dressed, unarmed military police in red berets somewhat casually stood guard around the perimeter of this most sacred of areas. Only a few days before many thousands bravely stood their ground here against organized assaults by the police. Hundreds were killed and thousands injured in this square. Stories of those 18 days before Mubarak resigned are now a permanent and proud modern chapter of Egypt’s incredibly rich history.

So how was it that, overnight, all this was gone? Even more important: What did it mean?

A Japanese journalist looked at me as we both gazed at the same scene. Shrugging, with both his arms extended upwards, he exclaimed, “It’s over!”

I didn’t think so. But I very much wanted to find answers to my questions.

I began walking around the perimeter of the square where I discovered several different assembled groups of around a dozen or more people. Some were praying at hastily erected altars honoring those who were murdered.  It was a very moving and sincere tribute where total silence was respected.

Other scattered groups were having heated and engaged conversations that could only mean, in today’s Egypt, that they were talking politics. I approached one of the larger groups and began asking questions and, again, I found people ready to welcome me and ready to speak.

Of course, there were moments when someone would insist they would only speak Arabic. I would respond with a “thumbs up,” showing that I recognized the pride people have in their own language and culture and we would both smile and leave it at that. On only a few other occasions, someone would ask, in Arabic, if I was a spy. They would warn those speaking to me that “Egyptians do not want the world to know our dirty laundry.” But always the majority defended me.

Was it a good thing that the protestors left the square? I first asked a 27-year old well-dressed young businessman as he stood alone gazing out over the Square. “Yes, what we wanted came,” he replied. “So why stay?”

Others echoed this view. “Yes, why not?” said 32-year old Mahmoud, an unemployed accountant who is now working as a chauffeur for a famous Egyptian academic. “I am glad the people made the changes in a system we had for 30 years. They did what we all wanted.”

As I was taking notes, others began to come into our little circle and participate. The discussion group grew bigger and bigger. This happens all the time now whenever I stop to interview someone. It reminded me of a remark I had heard the day before, on Sunday, with Hamad, a 26-year old former soldier and unemployed teacher who also works as a street vendor.

“Before no one talked politics. Now we are free, everyone is speaking,” he told me.

Hamad also had an opinion on leaving the square. “It is good to stay in the square because the protestors push our demands.” This was Sunday, early afternoon. But by Sunday evening, support for that idea certainly dimmed after the army announced that Parliament was being dissolved, the hated Constitution abrogated and the ban on all parties lifted.

“The president is gone, the parliament is gone, and the constitution will be changed. No party is banned. Our émigrés are returning. Let’s celebrate, clean up the square, and go home!” someone said in our group in very clear English.

So much had changed in just 24 hours. But it was clear to me that it was these concessions wrested by the movement from the military that emptied Tahrir Square and not any fear of government reprisals.

Amr Taha, a 24-year old dentist who holds dual American and Egyptian citizenship, had now entered our conversation. He was one of the more experienced activists from the very beginning. Amr was arrested while leaving a mosque on his way to a demonstration. “I was arrested for intending to demonstrate,” he told me with a big smile on his face.

“A thousand of us were arrested on that day, January 28, but we all escaped from the prison a few days later when the police just disappeared.” Later, Amr would show me a burned down police station near his mosque, one of many such examples of the people’s fury toward the corrupt and brutal police.

Of course, there are still several important demands that have not been resolved, Amr emphasized. For example, protestors have written and spoken publicly about wanting all political prisoners released, the emergency decree in effect since Mubarak took office lifted, and a definite timetable from the military government for achieving these political and even other economic goals.

“By leaving the square, the people are giving the army the trust they earned by not attacking us, even though we all know they did close their eyes to some of the police brutality,” explained Amr. “Anyway, if our demands are not addressed in a timely way, well, we all know the way back to Tahrir Square.”

This is not idle talk. Protest leaders have called for a massive demonstration on Friday, February 18, the official day of rest in Egypt. Its size will be a test, once again, of the current power relationships between the movement and the army. I’m betting on the movement.

Suddenly, our talk was interrupted by people all around us laughing and cheering as four large buses honking their horns were seen quickly driving through traffic. The buses were full of young people sticking their heads out the windows smiling and shouting, “Thief! Thief! Thief”

Everyone knew what they meant. The dictator was gone and did not even deserve to be called by his proper name.

Thanks to Mark Harris in Portland and to Shawna Bader, AFL-CIO Solidarity Center, for their insights.

Carl Finamore arrived in Cairo on February 12 with letters of introduction from his IAM Machinist local and from the San Francisco Labor Council, AFL-CIO where he serves as a delegate.