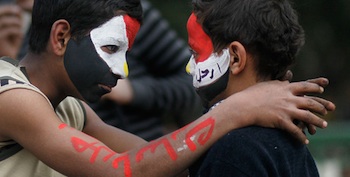 This article was originally published on ZCommunications.org from Al Jazeera English.

Since the fall of the Berlin Wall in 1989, four transformative events have reshaped the global setting in enduring ways. When the Soviet empire collapsed two years later, the way was opened for the triumphalist pursuit of the American imperial project, seizing the opportunity for geopolitical expansion provided by its self-anointed global leadership – as ‘the sole surviving superpower’.

This first rupture in the nature of world order produced a decade of ascendant neoliberal globalisation, in which state power was temporarily and partially eclipsed by passing the torch of lead global policymaker to the Davos oligarchs, meeting annually under the banner of the World Economic Forum. In that sense, the US government was the well-subsidised sheriff of predatory globalization, while the policy agenda was being set by bankers and global corporate executives. Although not often identified as such, the 1990s gave the first evidence of the rise of non-state actors – and the decline of state-centric geopolitics.

The second rupture came with the 9/11 attacks, however those events are construed. The impact of the attacks transferred the locus of policymaking authority back to the United States, as state actor, under the rubrics of ‘the war on terror’, ‘global security’ and ‘the long war’. This counter-terrorist response to 9/11 produced claims to engage in preemptive warfare – ‘The Bush Doctrine’. This militarist foreign policy was put into practice by initiating a ‘shock and awe’ war against Iraq in March 2003, despite the refusal of the UN Security Council to back American war plans.

This second rupture has turned the entire world into a potential battlefield, with a variety of overt and covert military and paramilitary operations launched by the United States without appropriate authorisation – either from the UN or by deference to international law.

Aside from this disruption of the liberal international order, the continuing pattern of responses to 9/11 involves disregard for the sovereign rights of states in the global south, as well as the complicity of many European and Middle Eastern states in the violation of basic human rights – through engaging in torture, ‘extreme rendition’ of terrorist suspects and the provision of ‘black sites’, where persons deemed hostile to the US were detained and routinely abused.

The response to 9/11 was also seized upon by the neoconservative ideologues that rose to power in the Bush presidency to enact their pre-attack grand strategy, accentuating regime change in the Middle East – starting with Iraq, portrayed as ‘low-hanging fruit’ that would have multiple benefits once picked.

The third rupture involved the continuing global economic recession that began in 2008 – and which has produced widespread rises in unemployment, declining living standards, and rising costs for basic necessities – especially food and fuel. These developments have exhibited the inequity, gross abuses, and the deficiency of neoliberal globalisation – but have not led to the imposition of regulations designed to lessen such widely uneven gains from economic growth – to avoid market abuses, or even to guard against periodic market collapses.

This deepening crisis of world capitalism is not currently being addressed – and alternative visions, even the revival of a Keynesian approach, have little political backing. This crisis has also exposed the vulnerabilities of the European Union to the uneven stresses exerted by varying national domestic capabilities to deal with the challenges posed. All of these economic concerns are complicated – and intensified by the advent of global warming, and its dramatically uneven impacts.

A fourth rupture in global governance is associated with the unresolved turmoil in the Middle East and North Africa. The mass popular uprisings that started in Tunisia have provided the spark that set off fires elsewhere in the region, especially Egypt. These extraordinary challenges to the established order have vividly inscribed into the global political consciousness the courage and determination of ordinary people, particularly the youth, living in these Arab countries, who have endured intolerable conditions of material deprivation, despair, alienation, elite corruption and merciless oppression for their entire lives.

The outcomes of these movements for change in the Arab world is not yet knowable – and will not become clear for months, if not years, to come. It is crucial for supporters on the scene – and around the world – not to become complacent, as it is certain that those with entrenched interests in the old oppressive and exploitative order are seeking to restore former conditions to the greatest extent possible, or at least salvage what they can.

In this regard, it would be a naïve mistake to think that transformative and emancipatory results can come from the elimination of a single hated figure – such as Ben Ali in Tunisia or Mubarak in Egypt – or their immediate entourage. Sustainable, significant change requires a new political structure, as well as a new process that ensures free and fair elections and adequate opportunities for popular participation. Real democracy must be substantive as well as procedural, bringing human security to the people – including tending to basic needs, providing decent work, and a police force that protects rather than harasses. Otherwise, the changes wrought merely defer the revolutionary moment to a later day, and the ordeal of mass suffering will resume.

To simplify, what remains unresolved is the fundamental nature of the outcome of these confrontations between the aroused regional populace and state power, with its autocratic and neoliberal orientations. Will this outcome be transformative, bringing authentic democracy based on human rights and an economic order that puts the needs of people ahead of the ambitions of capital? If it is, then it will be appropriate to speak of ‘The Egyptian Revolution’, ‘The Tunisian Revolution’ – and maybe others in the region and elsewhere to come – as it was appropriate to describe the Iranian outcome in 1979 as the Iranian Revolution.

From this perspective, a revolutionary result may not necessarily lead to a benevolent outcome – beyond ridding the society of the old order. In Iran, a newly oppressive regime resting on a different ideological foundation emerged, itself challenged after the 2009 elections by a popular movement calling itself the Green Revolution. So far this use of the word ‘revolution’ expressed hopes rather than referring to realities on the ground.

What took place in Iran – and what seemed to flow from the onslaught unleashed by the Chinese state in Tiananmen Square in 1989 – was ‘counterrevolution’ – the restoration of the old order and the systematic repression of those identified as participants in the challenge to power. In fact, the words deployed can be misleading. What most followers of the Green Revolution seemed to seek in Iran was reform – not revolution – changes in personnel and policies, protection of human rights – but no challenge to the structure or the constitution of the Islamic Republic.

It is unclear whether this Egyptian movement is at present sufficiently unified – or reflective – to have a coherent vision of its goals beyond getting rid of Mubarak. The response of the state, besides trying to crush the uprising and even banish media coverage, offers at most promises of reform: fairer and freer elections and respect for human rights.

It remains unknown what is meant by – and what will happen during – an ‘orderly transition’ under the auspices of temporary leaders closely tied to the old regime, who likely enjoy enthusiastic backing from Washington. Will a cosmetic agenda of reform hide the reality of the politics of counterrevolution? Or will revolutionary expectations come to the fore from an aroused populace to overwhelm the pacifying efforts of ‘the reformers’? Or, even, might there be a genuine mandate of reform, supported by elites and bureaucrats – enacting sufficiently ambitious changes in the direction of democracy and social justice to satisfy the public?

Of course, there is no assurance – or likelihood – that the outcomes will be the same, or even similar, in the various countries undergoing these dynamics of change. Some will see ‘revolution’ where ‘reform’ has taken place, and few will acknowledge the extent to which ‘counterrevolution’ can lead to the breaking of even modest promises of reform.

At stake, as never since the collapse of the colonial order in the Middle East and North Africa, is the unfolding and shaping of self-determination in the entire Arab world, and possibly beyond.

How these dynamics will affect the broader regional agenda is not apparent at this stage, but there is every reason to suppose that the Israel-Palestine conflict will never be quite the same. It is also uncertain how such important regional actors as Turkey or Iran may – or may not – deploy their influence. And, of course, the behaviour of the elephant not formally in the room is likely to be a crucial element in the mix for some time to come, for better or worse.

Richard Falk is Albert G. Milbank Professor Emeritus of International Law at Princeton University and Visiting Distinguished Professor in Global and International Studies at the University of California, Santa Barbara. He has authored and edited numerous publications spanning a period of five decades, most recently editing the volume International Law and the Third World: Reshaping Justice (Routledge, 2008).

He is currently serving his third year of a six year term as a United Nations Special Rapporteur on Palestinian human rights.

The views expressed in this article are the author’s own and do not necessarily reflect Al Jazeera’s editorial policy.