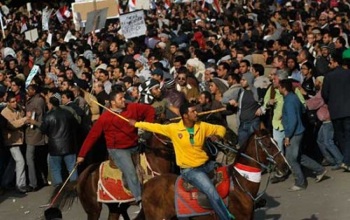 When Egyptian protest leaders this week called for a “million man march” in Cairo and an “indefinite general strike,” they not only raised the bar in their challenge to the Mubarak government, they tied their movement back to its deepest roots, a struggle in which more than 2 million workers have staged an estimated 2,000 strikes since 2004, most of them in the country’s textile industry.

Their gains have been incremental, but their willingness to risk their jobs and lives to defy authority paved the way for the “spontaneous” demonstrations that erupted on January 25 in Cairo, Suez, Alexandria and in dozens of countries around the world.

No, the January 25 uprising wasn’t the work of the ossified Muslim Brotherhood, which is so creaky it refused to join the demonstrations until Friday of last week after Mubarak was on the run. And for once, a contagion that quickly spread around the globe wasn’t kicked up by the CIA—although of course the United States is trapped in a web of deceit in Egypt, which has required the continued defense of one of the most repressive and brutal dictatorships in the world.

What it took was a fist full of matches manufactured by union activists, then tossed by student leaders into the social gasoline that has been puddling up on the streets of Cairo for decades.

On a visit to Cairo three years ago, I concluded that a volatile concoction of poverty, hunger, unemployment, child labor, and police brutality simply had to explode.

The communications technology used by members of the “April 6th Youth Movement” to organize the current protest had its genesis in 2008 when a Facebook group called “April 6,” used internet activism, social networking and text messaging to snowball support for a strike by 25,000 workers at a textile plant in Malhalla, about an hour north of Cairo.

The walkout was quickly crushed, its leaders beaten and imprisoned.  But the audacity of the workers and the friends they discovered proved contagious and led to an increase in what was already an unprecedented wave of work stoppages in a country where the only “union” is government controlled. In 2009 and 2010, the wave of strikes continued, including work stoppages by more textile workers, janitors, cleaners, railroad workers and education administrators

The growing protests and calls for regime change and democratization are filled with irony for the United States. With the help of an estimated $50 billion in military aid and economic assistance over the past 30 years, the United States has been able to count on Mubarak as an dependable, albeit corrupt ally.

The strikes and the new general upheaval arguably have been caused by the neo-liberal “American model” of austerity-driven, free-market economic practices being urged on underdeveloped countries by the World Bank and the World Trade Organization. Egypt, historically a poor country with a wide wage and wealth gap, began privatizing basic industries and ending subsidies on consumer necessities in 2004.

Workers were thrown out of their jobs and lost their pensions.  Prices skyrocketed. Families averaging $2 a day in income saw their purchasing power whacked in half. Meanwhile, upper-class businessmen and government officials piled up fortunes under the “American model” and began building gated communities in the suburbs, where huge mansions daily remind the poor and the working class of their inability to feed their children, hundreds of thousands of whom are forced to work in the country’s cotton fields and “carpet schools.”

When I visited Cairo, I met many of the independent journalists, bloggers, union and student leaders who were then, as now, demanding Mubarak’s ouster. Radical extremists? Religious idealogues? Hardly. A young Muslim Brother urged me not to characterize his people as terrorists. A graduate student said he and his classmates were motivated to pursue change because all of them were too poor to marry and have children. A labor activist who asked to remain anonymous lamented, “We are loving, hard-working people.  Unfortunately, we are not very good fighters.”

Fortunately, some things do change.