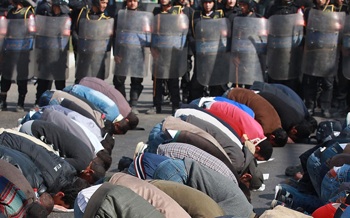 Last week, an image that could define an era flashed around the globe: on a concrete strip, amid flames and smoke, a row of young Egyptians knelt in solemn prayer—a short respite before resuming an expansive revolution that has caught the world off guard.

Born of a crucible of social and economic unrest, Egypt’s uprising, which complements similar actions in Tunisia and other Arab countries, draws from grassroots movements that transcend national and cultural lines: largely secular, ideologically non-aligned, youth driven, and so successful even the instigators seemed surprised.

They have demanded economic opportunity, political enfranchisement, and freedom of expression. To Americans, here was the other—the “Arab street” that television screens typically paint as faceless extremists—suddenly looking a lot like…us.

And the White House was suddenly challenged to walk its talk on democracy. Not long ago, President Obama championed democratic principles to a rapt crowd at Cairo University, in the ancient city now paralyzed by protest. Will those promises finally be redeemed as Egyptian President Hosni Mubarak’s regime crumbles?

After Tuesday’s massive direct actions, Mubarak announced that although he will not seek reelection this fall, he will serve out the remaining seven months of his term. This morning, thousands of his purported supporters attacked protestors. They were led in part by police on horseback, according to Al Jazeera. The military, which has remained independent from Mubarak, has not intervened in today’s clashes thus far. This morning, before the violence began, a military spokesperson told protestors their “message has been heard, demands understood” and urged protestors to disperse.

Many believe Mubarak’s goal throughout the protests has been to create the impression of chaos and provoke the military’s intervention. But speaking from Tahrir Square Tuesday night, before Mubarak’s speech, protestor Aladin El Sahaby described a still peaceful scene to Colorlines through a relayed phone connection:

We are managing fine, no one is getting robbed, we are all protecting each other and working so well as one unit…. We are telling the government, we don’t NEED you or want you, as we are able to police ourselves better than any of you have ever done.

There really is an unbelievable feeling of community now, of people coming together. I’ve never seen Egypt this way. People are picking up trash in Tahrir Square. People are handing out food. People are helping each other. People are sleeping in the middle of Tahrir Square and setting up tents in the middle of the square. It is a scene that is very emotional. It’s something that no one thought could come together. It’s largely leaderless. I mean, no one—there’s no one organizing group. This is a popular uprising across all segments of society.

Though the next steps are uncertain, the situation is clearly intensifying. “This Friday, if [Mubarak] is not gone, we have vowed to occupy the TV stations, the government buildings and the Parliament, and the presidential house,” El Sahaby said.

The stand off puts the U.S. government in an untenable position. As protestors first massed in the streets to spur revolution, emboldened by the sudden ouster of Tunisian dictator Ben Ali, Obama sounded eerily tone deaf. He offered vague praise for the demonstrators without directly challenging Mubarak’s reign. Obama and Secretary of State Hillary Clinton have since spoken increasingly forcefully, urging “orderly transition” that “must begin now.”

The White House’s initial hedging response reflects its delicate patronage of Arab authoritarianism. In both Egypt and Tunisia, brutal oppression has long been tolerated in exchange for winning allies against terrorism—and in Egypt’s case, for an Arab interlocutor in the foundering Israeli-Palestinian talks.

“It certainly serves the interests of authoritarian rulers in the region for the United States to have that depiction and understanding of politics in the Middle East,” said Melani Cammett, director of Brown University’s Middle East Studies Program, “because it helps give a rationale for retaining authoritarian repression.”

The U.S. has not only funneled masses of military aid to Mubarak; it has deliberately allowed him to flout international pressure for reform, as noted in a recent Congressional Research Service report. In 2009, Clinton responded to a press question on Egypt’s human rights record with, “We all have room for improvement.”

Now come the consequences of that Faustian bargain—starkly illustrated in the snapshots of “Made in the U.S.A.” tear-gas canisters hurled at Tunisian and Egyptian protesters.

Outside Egypt, the mainstream press percolates with familiar anxiety about social breakdown and Islamists hijacking the movement. (One Jerusalem Post commentator argued that the regional unrest places Israelis in “a neighborhood where popular democracy means war against Israel.”) But until this morning’s raid by Mubarak’s backers, the paranoia didn’t hold up against images of the vibrant, peaceful crowd occupying Tahrir (Liberation) Square.

After Mubarak’s police disappeared early in the uprising, volunteers formed their own neighborhood patrols, while diverse opposition groups rallied around a call for democratic rule, loosely united behind Nobel laureate Mohamed ElBaradei.

The ideals Obama touted in his Cairo speech in 2009 appear to be bearing fruit.The indefatigable resistance that has unfurled in the “Arab street” exposes how profoundly the U.S. miscalculated and underestimated the swelling unrest. Ironically, the uprisings could do more to combat terrorism than Washington’s cynical allegiances ever did, wrote Middle East scholar Mark Levine last Friday:

The most depressing and even frightening part of the tepid US response to the protests across the region is the lack of appreciation of what kind of gift the US, and West more broadly, are being handed by these movements. … Supporting real democratisation will do more to downgrade al-Qaeda’s capabilities than any number of military attacks.

The region-wide revolt’s momentum hasn’t crested yet, however. And the hard part will come later, in the reconfiguration of the political constellations in North Africa and the Middle East around oil, Israel and terrorism.

Tariq Ramadan, for example, has warned that a fragile Tunisia might slip “too quickly” off the public radar and invite the U.S. and other powers to stake out fresh political and economic strongholds in the region. Supporters of the movement, he argued, should not “risk naively hailing a ‘Tunisian revolution’ without taking strict account of what remains to be done to ensure its political independence and democratic transparency.”

In Egypt, the “leaderless” uprising’s strength may also pose risks: the lack of structure makes it hard to gauge how the political standoff will shake out, at what cost in civilian casualties, and through what kind of tactical compromise in the opposition.

Aside from cutting aid to the dictatorship and standing in full solidarity with the grassroots opposition, Washington’s most useful move at this point would be to simply step aside and let the revolution run its course. Mubarak’s reign was marred with the Pentagon’s thumbprint; the last thing indigenous activists need now is a Western stamp of approval that might be seen as a political taint.

For Americans, though, the crisis could ripple powerfully across the Atlantic. The tremors in Tunisia, Egypt, Yemen and their neighbors may well prompt Americans to see Arab, African and Muslim peoples through different eyes. Ghada Hashem Talhami, an emeritus professor of politics at Lake Forest University, told Colorlines: “The Western public now realizes that uprisings in the Middle East [and North Africa] can develop as a result of activities of young, educated and modern demonstrators. Indeed, the image of blood-thirsty Islamic fanatics bursting on the streets and calling for the demise of the U.S. has been shattered forever.”

This week’s didn’t mark the regime’s downfall quite yet, but as Egyptian-born activist Mona Eltahawy wrote in the Guardian, it heralded a nation’s renewal:

Thirty years of Mubarak rule have shrivelled the country that once led the Arab world. But those youthful protesters, leapfrogging our dead-in-the-water opposition figures to confront the dictator, are liberating all Egyptians from the burden of history. Or reclaiming the good bits.

Though the protesters may not yet have a clear political road map, they’ve already blazed a new pathway to emancipation, defying both the Egyptian old guard and Washington. For now, outside observers should put aside simplistic analogies of an Arab 1989 or Egypt’s “Berlin Wall”—and just watch, as people come together to define their revolution, at last, on their own terms.

With reporting by Seth Freed Wessler and Deirdre Kennedy.