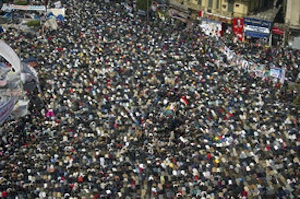 Hosni Mubarak, the Egyptian president, has resigned from his post, handing over power to the armed forces.

Omar Suleiman, the vice-president, announced in a televised address that the president was “waiving” his office, and had handed over authority to the Supreme Council of the armed forces.

Suleiman’s short statement was received with a roar of approval and by celebratory chanting and flag-waving from a crowd of hundreds of thousands in Cairo’s Tahrir Square, as well by pro-democracy campaigners who attended protests across the country on Friday.

The crowd in Tahrir chanted “We have brought down the regime”,  while many were seen crying, cheering and embracing one another.

“Tonight, after all of these weeks of frustration, of violence, of intimidation … today the people of Egypt undoubtedly [feel they] have been heard, not only by the president, but by people all around the world,” our correspondent at Tahrir Square reported, following the announcement.

Pro-democracy activists in the Egyptian capital had marched on the presidential palace and state television buildings on Friday, the 18th consecutive day of protests.

At the state television building earlier in the day, thousands had blocked people from entering or leaving, accusing the broadcaster of supporting the current government and of not truthfully reporting on the protests.

“The military has stood aside and people are flooding through [a gap where barbed wire has been moved aside],” Al Jazeera’s correspondent at the state television building reported.

He said that “a lot of anger [was] generated” after Mubarak’s speech last night, where he repeated his vow to complete his term as president.

Outside the palace in Heliopolis, where at least ten thousand protesters had gathered in Cairo, another Al Jazeera correspondent reported that there was a strong military presence, but that there was “no indication that the military want[ed] to crack down on protesters”.

She said that army officers had engaged in dialogue with protesters, and that remarks had been largely “friendly”.

Tanks and military personnel had been deployed to bolster barricades around the palace.

Our correspondent said the crowd in Heliopolis was “gaining momentum by the moment”, and that the crowd had gone into a frenzy when two helicopters were seen in the air around the palace grounds.

“By all accounts this is a highly civilised gathering. people are separated from the palace by merely a barbed wire … but nobody has even attempted to cross that wire,” she said.

As crowds grew outside the palace, Mubarak left Cairo on Friday for the Red Sea resort of Sharm al-Shaikh, according to sources who spoke to Al Jazeera.

In Tahrir Square, hundreds of thousands of protesters gathered, chanting slogans against Mubarak and calling for the military to join them in their demands.

Our correspondent at the square said the “masses” of pro-democracy campaigners there appeared to have “clear resolution” and “bigger resolve” to achieve their goals than ever before.

However, he also said that protesters were “confused by mixed messages” coming from the army, which has at times told them that their demands will be met, yet in communiques and other statements supported Mubarak’s staying in power until at least September.

In a statement read out on state television at midday on Friday, the military announced that it would lift a 30-year-old emergency law but only “as soon as the current circumstances end”.

The military said it would also guarantee changes to the constitution as well as a free and fair election, and it called for normal business activity to resume.

Al Jazeera’s correspondent in Tahrir Square said people there were hugely disappointed with that army statement, and had vowed to take the protests to “a last and final stage”.

“They’re frustrated, they’re angry, and they say protests need to go beyond Liberation [Tahrir] Square, to the doorstep of political institutions,” she said.

Protest organisers have called for 20 million people to come out on “Farewell Friday” in a final attempt to force Mubarak to step down. 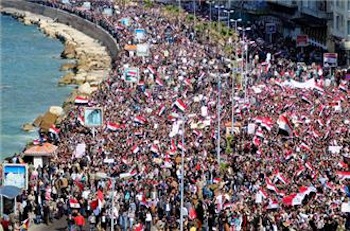 Hossam El Hamalawy, a pro-democracy organiser and member of the Socialist Studies Centre, said protesters were heading towards the presidential palace from multiple directions, calling on the army to side with them and remove Mubarak.

“People are extremely angry after yesterday’s speech,” he told Al Jazeera. “Anything can happen at the moment. There is self-restraint all over but at the same time I honestly can’t tell you what the next step will be … At this time, we don’t trust them [the army commanders] at all.”

An Al Jazeera reporter overlooking Tahrir said the side streets leading into the square were filling up with crowds.

“It’s an incredible scene. From what I can judge, there are more people here today than yesterday night,” she said.

“The military has not gone into the square except some top commanders, one asking people to go home … I don’t see any kind of tensions between the people and the army but all of this might change very soon if the army is seen as not being on the side of the people.”

Hundreds of thousands were participating in Friday prayers outside a mosque in downtown Alexandria, Egypt’s second biggest city.

Thousands of pro-democracy campaigners also gathered outside a presidential palace in Alexandria.

Egyptian television reported that large angry crowds were heading from Giza, adjacent to Cairo, towards Tahrir Square and some would march on the presidential palace.

Protests are also being held in the cities of Mansoura, Mahala, Tanta, Ismailia, and Suez, with thousands in attendance.

Violence was reported in the north Sinai town of el-Arish, where protesters attempted to storm a police station. At least one person was killed, and 20 wounded in that attack, our correspondent said.

In a televised address to the nation on Thursday, Mubarak said he was handing “the functions of the president” to Vice-President Omar Suleiman. But the move means he retains his title of president.

Halfway through his much-awaited speech late at night, anticipation turned into anger among protesters camped in Tahrir Square who began taking off their shoes and waving them in the air.

Immediately after Mubarak’s speech, Suleiman called on the protesters to “go home” and asked Egyptians to “unite and look to the future.”

Union workers have joined the protests over the past few days, effectively crippling transportation and several industries, and dealing a sharper blow to Mubarak’s embattled regime.