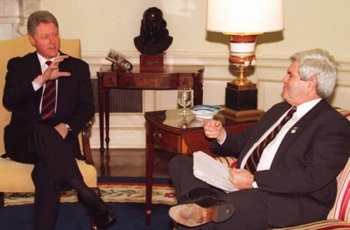 If Congress and the President can’t strike a deal before March 4 to keep funds flowing to government agencies, the federal government might be forced to shut down for the first time since 1996. The House Republicans are demanding huge cuts in virtually every area of discretionary spending, and the Senate Democrats are pushing back. The president has even threatened to veto the continuing resolution that the House passed last week.

Dwight Bowman, National Vice President Local 14 of the American Federation of Government Employees, told Working In These Times that his union is very concerned about the prospect of a government shutdown. A shutdown isn’t a foregone conclusion yet, but AFGE is taking the possibility very seriously. Hundreds of thousands of public employees could be affected.

800,000 federal employees were furloughed during the first Clinton-era shutdown of 1995. Millions of Americans lost out on government services during the shutdowns of 1995 and 1996. The second and longer hiatus lasted 21 days, making it the longest government shutdown in U.S. history. The CDC stopped monitoring contagious diseases. The National Institutes of Health disease hotline went dead. 200,000 U.S. applications for passports went unfilled, at great cost to the tourism and hospitality industries. Deadbeat dads got a vacation from child support payments.

How would a shutdown play out in 2011? It’s hard to say for sure, because so many of the details would have to be negotiated.

In the event of a shutdown, government agencies would notify the public-sector unions to negotiate the terms of a shutdown. One of the most important questions is who is deemed an essential employee. Each agency decides for itself, in consultation with the unions, which employees will be deemed essential.

“It’s involuntary servitude, next thing to slavery,” Bowman says, “There’s a promise of payment, but payment is not there.”

Historically, government employees have received back pay after a shutdown, Bowman explains. During the Clinton years, separate legislation was passed to make sure workers got their back pay. However, he says there’s no guarantee that would happen again.

“More reasonable people were in charge in those days,” Bowman recalls. “The ideology was not as severe.”

He notes that anti-government, anti-spending legislators who favor a shutdown may not be sympathetic to the employees of agencies that they don’t think should exist in the first place.

Note that members of Congress and the president will continue to get their regular paychecks whether the government shuts down or not.

The effects of a shutdown will be far-reaching, not just for the government employees, but for the general public. Just the costs of shutting down the agencies and starting them back up would be considerable. Even after the government came back online, the level of service would continue suffer until employees cleared accumulated backlogs.

Meatpacking plants aren’t going to stop production just because government meat inspectors stop working, Bowman notes. All that uninspected meat would eventually find its way into the supermarkets of the nation. So, the safety of the food supply could be affected long after the inspectors go back to work.