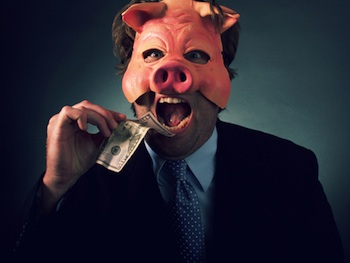 A recent report by the International Monetary Fund destroys the myth that the current economic crisis—the worst in almost a century—was caused by fancy financial instruments, government intervention in the housing market or Main Street greed. It concludes, rather, that the global brush with economic depression was the result of the colossal gap in incomes between rich and working Americans.

The sadly obscure paper argues that a dramatic concentration in wealth at the top—at levels not seen anywhere else in the industrialized world—created a fundamental imbalance that brought the entire system down on itself. The document shows that the origins of America’s last financial implosion, in 1929, were almost identical to those of 2008. In both cases, income inequality was the culprit. And even in the collapse’s wake, the chasm between the top 10 percent and the remaining 90 percent appears to be widening further.

“Working Paper 10/268,” as the charged econometric expose is officially known, is actually one in a string of little-read examinations into the technical operations of the world’s financial system, issued on a regular basis by the IMF. It reads like a dire dispatch from the global recession’s frontline. And like the stream of mid-level CIA analyst reports written by those most knowledgeable about threats to America, “10/268” is likely to be overlooked by the decision makers who most need to read it. 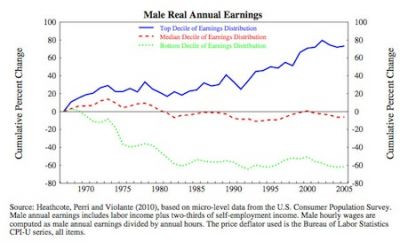 The IMF’s analysis points to persistent danger for the United States. Starting in the 1980s, Washington restructured America’s economic system to reward financial gains from investments rather than wealth generated by work. The result is worldwide economic fragility. Unless the U.S. gets serious about strong job growth and widespread income gains, a period of greater economic insecurity is likely.

Income inequality in America is closer to that of developing countries like Africa’s Cote d’Ivoire and Central America’s Nicaragua than it is to its economic peers. It is greater than that of even Egypt. The events of Tahrir Square show the unstable mix of growing income inequality and rising prices, both causal factors for instability listed in the report. But the U.S. doesn’t have to look beyond its shores to see that trouble has already arrived. With an over reliance on the wealth of the rich, America is balancing its future on the point of an inverted pyramid.

At a level not seen since the Great Depression, by 2007, the top 5 percent enjoyed 34 percent of all national income, leaving the remaining pie to be divided by the rest of the workforce. This was a staggering 30 percent rise in the rich’s share since 1983. In fact, income earners at the bottom actually saw their real wages decrease by almost 100 percent between 1983 and 2007, when compared with income earners at the top.

This explosive split between the rich and everyone else is explained by the different way in which the super rich are paid. While the other 90 percent of workers earn most of their money by the hour or in a monthly salary, bonuses and stock-option grants are pivotal sources of compensation for high-income earners. This is why the rich are so obsessed about bonuses and other byzantine forms of payment. To everyone else, wages and salaries are everything, but for those at the top they’re just pennies on the dollar.

Due to changes in the tax code initiated by Ronald Reagan in 1981, followed by accounting changes in the 1990s, bonuses, stock, and capital gains (or, money earned off money) are all now taxed significantly lower than hourly or salaried payments. The average salary of a CEO is $1 million, though sometimes as low as $1; average cash bonuses are 12 times that, with stock-option grant returns as high as $200 million. The tax rate for certain capital gains is zero percent, but the highest tax bracket for salaries is 35 percent. The ability to earn 100 times your base pay, practically tax free, would be popular with anyone. In this case, it’s a privilege reserved for the rich—and it gives them extra cash to play with, dangerously.

Similar to water pooling on a mountain, this torrent of cash collected by the rich can’t just sit there. It has to go somewhere. Though wealth is concentrating at the top and declining at the bottom, the prices of goods still increase. And these rising prices—or, inflation—erode all that money pooling in the bank accounts of the rich. After one year of 3 percent inflation, $1 is worth just 97 cents. So that dollar can’t just sit there. It must be invested in order to make up the lost 3 cents, and preferably more.

What’s a perfect place to invest? Ironically, it’s in the 90 percent of Americans who’ve experienced income declines. That’s because falling incomes stimulate demand for cash from other sources—ends have to meet somehow. Throughout the so-called boom, that cash came through loans paid for by wealthy investors and secured by workers’ number one asset: their homes. In other words, long term wage destruction forced individuals to match short term needs by mortgaging their future. 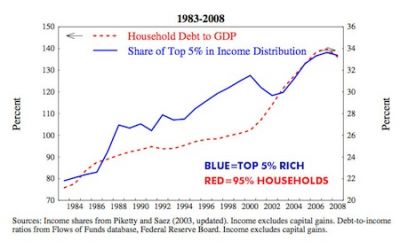 The massive flood of cash injected into the economy through massive borrowing initially paid off. With trillions of dollars of investment returns, the rich were even wealthier. Meanwhile, by putting up collateral, borrowers were able to get the money needed to keep up with rising costs and maintain their lifestyles. For a time, everyone spent and it buoyed the economy. By 2007, consumer spending accounted for 70 percent of all economic growth.

The infusion of cash also swelled the finance sector to ridiculous size. Wall Street facilitated the exchange of capital between the top 10 percent of Americans and the rest. It underwrote the mortgages, managed the money of the wealthy, and developed deceptively complex ways to keep feeding the system new clients and issue new debt. Now familiar jargon concealed the crime, but subprime loans, collateralized debt obligations and mass document fraud were the tools the Street used to ensure the cash tap remained open.

Notably, this deception first preyed upon communities where inequality was greatest: black neighborhoods where women in particular were still struggling from the 2001 recession, but did have homes they could mortgage. The massive racial disparity in subprime lending, at all income levels, was not coincidental. The people who most needed cash were black communities where jobs never returned.

On the eve of our current crisis, the finance sector accounted for nearly 10 percent of all economic activity in the United States. The last time Wall Street approached that share of GDP was, you guessed it, the Great Depression. This out-sized dominance by Wall Street also translated into disproportionate economic power for the finance industry. In 2006, 40 percent of U.S. economic growth came solely from moving money around.

But for all the supposed growth it created, the massive transfer of cash downward and assets upward did not address the U.S. economy’s essential problem: a lack of income growth for workers. Early success led to more borrowing. But the disparity between falling wages and growing debt payments edged the entire system towards the precipice. The distance between what people owed and what they could afford eventually prompted systemic default. In 2008, the entire financial system buckled, caved, and wiped $9 trillion in book value from the economy.

In addition to the crisis’ origins, the IMF report examines effective responses in the aftermath. It argues that bailouts of Wall Street are not the best way forward. Financed by even more debt, TARP-like rescues salvage banks and the rich, but leave everyone else holding the bag. This type of lifeline only reinforces the dynamic that caused the collapse: wealthy incomes increase and bottom ones slump.

Instead, boosting the incomes of average people is a better way to rollback excess borrowing, pay down debt, and put the economy on a more stable foundation. This solution is not a new one. In fact, the New Deal—Washington’s answer to the last national economic emergency—was designed to put millions of people back to work at good wages. It’s also the primary solution everyone from Beltway economists to economic justice advocates have been pleading for, to no avail for years. But like during the Great Depression, it’s the one reviled by the rich.

Just last week, headlines declared that economic growth had returned to 2007 pre-crisis levels and the stock market reached highs not seen in three years. Sure, but in the intervening time, inequality has intensified. In 2009, the number of those worth over $5 million leaped by almost 20 percent. 2010 bonuses on Wall Street were the largest in U.S. history. All while poverty, homelessness, hunger and unemployment/underemployment hit near record levels. And echoing the previous growth cycle, the median income for blacks fell by more than 4 percent in 2009, putting it more than $17,000 behind the national median.

It doesn’t have to be this way.

Our economy reached this dangerous imbalance due to “not acts of God, but acts of men,” as Phil Angelides, chair of the government’s Financial Crisis Inquiry Commission put it. Throughout the 1980s and into the 1990s, America’s political leaders changed laws and regulations to benefit income earned from financial gains rather than work. Those choices turned back 50 years of economic policy that was previously designed, in the words of the 1946 Employment Act, to “promote employment…and purchasing power.” Combined with the government’s weakening of labor unions, America’s refashioned economic rulebook caused wealth amongst the rich to skyrocket as the wealth of everyone else tanked. This fundamental imbalance pushed capital to those at the summit of the economy. When it finally surged downward, the flood of money washed away a great deal.

According to a report by the World Economic Forum in Davos, Switzerland, Americans can already see the impact of this inequality on social cohesion. The document highlights the U.S. wealth concentration and stubborn unemployment problem as a source of global instability. It points to American political turbulence, exemplified by the rise and success of the tea party—fueled by those out of work—as a sign of things to come. Festering inequality can be dangerous.

What’s striking about the IMF report is the way in which it flies in the face of the dominant narrative of why America is in crisis. Rush Limbaugh regularly condemns the government’s demand that banks cease denying loans to credit worthy people of color as the cause. Those on Wall Street project their greed on the ailing middle class and say privately that Main Street is at fault. Former Chair of the Federal Reserve Alan Greenspan, who presided over years of American inequality and the resulting housing crisis, points the finger at Chinese and Gulf State investments in the US. Congressional Republicans charge that it was universal “excesses” in the system, perhaps their version of the boogeyman.

But a quiet, detailed, fact based, mathematically sound document from researchers at the world’s financial body blows a hole in all of that. It argues that the U.S. crisis, given alterations in the wider domestic economic system, was no surprise. It happened in 1929, and in 2008 occurred for the same reason. Unless the country reverses course, it is bound to transpire yet again. Perhaps even swifter and harsher than anyone can imagine.

Imara Jones is a New York based blogger who writes about economic justice for Colorlines.com.