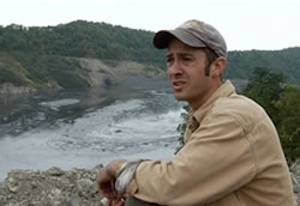 Or, as GOP members of the US House Commerce and Energy and their Big Coal-bankrolled colleagues continue their wildly misinformed banter this week on the economic impact of the EPA’s enforcement of the Clean Water Act, coalfield residents from Alaska to Appalachia are turning to Rory McIlmoil, the “Tesla of the coalfields,” for another question:

Will the central Appalachian coalfields–and their fellow coal mining communities in the heartland, the Powder River Basin and in 24 states–be part of President Obama’s challenge to the nation to produce 80 percent of America’s electricity from clean-energy sources by 2035?

While there is a lot of well-meaning discussion about a just transition to a sustainable clean energy economy in the coalfields, McIlmoil is one of the few economists and energy analysts who has crunched the numbers and begun the process of laying out a roadmap.

Two years ago, McIlmoil made a name for himself nationally as the brains behind the breakthrough and widely acclaimed Coal River Wind Project, a seemingly game-changing proposal to counter an impending mountaintop removal operation that would have established a wind farm on Coal River Mountain West Virginia. In the face of a reckless 6,000-acre strip mine, the Coal River Wind Project would have created 200 local jobs during construction, and 50 permanent jobs during the life of the wind farm, and produced enough energy for 150,000 homes.

Shifting his work to the West Virginia-based Downstream Strategies firm, McIlmoil co-authored a must-read study last year on “The Decline of Central Appalachian Coal and the Need for Economic Diversification.” The report concluded:

“State and local leaders and policy-makers should recognize the economic and regulatory realities facing the region’s coal industry, and should take steps to help diversify coalfield economies. Only by doing so will they ensure the availability of new jobs and sources of revenue for the impacted areas.”

As the Energy Program Project Manager for Downstream Strategies, McIlmoil answered these questions for the Roadmaps to New Power series, with a particular focus on the current debate over mountaintop removal mining.

JB: How extensive is mountaintop removal mining in Appalachia, in terms of jobs and economic revenue?

In terms of revenue, studies we’ve conducted on the impact of the coal industry on Central Appalachian state budgets show that West Virginia relies on coal for approximately 8 percent of general revenues, with surface mining accounting for around 3 percent. In Kentucky the impact was even smaller. For Virginia and Tennessee, the impact is negligible, providing less than a tenth of a percent of state revenues.

However, it is important to note that a handful of counties across the region rely heavily on coal and mountaintop removal. Boone County, West Virginia, for instance, relies on coal for approximately 75 percent of total county revenues. Such a level of dependency is disconcerting however since the federal Energy Information Administration recently projected that the region is likely to experience a 51 percent decline in coal production by 2015 (compared to 2008 levels).

JB: Of the numbers of jobs that would be lost, how many could be absorb into other coal mining operations?

RM: It is important to reiterate that thousands of coal mining jobs are expected to be lost due to shifts in energy markets and the declining competitiveness of Central Appalachian coal alone. A 51 percent decline in regional coal production could result in a 30 to 60 percent decline in direct coal employment, and this is likely going to happen regardless of any new regulations on mining. One of the trends that will give a small boost to production in the region is the rise in global demand and prices for metallurgical (”met”) coal used for manufacturing steel and other products. Central Appalachia is the biggest producer of met coal in the nation and is exporting more and more coal each year to other countries for use in manufacturing. Met coal is mostly produced through underground mining, and most of the coal produced through mountaintop removal is used for electricity generation. So what this means is that it is difficult to assume that any jobs lost from a reduction or elimination of mountaintop removal will or can be absorbed in new underground mines, but this is just another reason to start incentivizing and supporting new economic development in the coalfield communities.

JB: Do you think any “just transition” to a non-MTR economy will require federal assistance, such as a GI Bill for coal miners for training and placement in other industries?

RM: Definitely. I feel that we as a nation need to define ourselves. Do we want to be a country that is content with contaminating our air and water for electricity generation? Or do we want to continue to be a country that leads the world in innovation, efficiency, and sustainability? If we choose to continue on a path of instituting new ideas and new, cleaner forms of energy, then we need to support economic transition in the communities that have given this country so much of their labor to help us grow over the past century and a half. However, it is not up to the federal government to decide what that transition will look like, that should be left up to the miners and their communities, so it all has to start with an honest conversation about the hardship that is coming over the next 5-10 years and about what can be done to start the transition.

So I feel like the federal government should be willing to support new economic opportunities that are based on local values, local assets, and developing local capacity, which means instituting training programs and providing grants and low interest loans for small locally-owned businesses. Many folks are already having that conversation and working with communities to develop that vision, but they urgently need financial support to move their vision forward.

RM: That is a tough question, but again it all begins with a conversation and with connecting those miners to the organizations and resources that are already available to them. The Mountain Association for Community Economic Development (MACED) in Kentucky provides a great model for how to develop training programs and leverage financial resources aimed at community economic development in low-income communities of the coalfields. The region needs more organizations like MACED that have the capacity and the resources to support such programs.

In terms of reforestation, the Appalachian Regional Reforestation Initiative offers a good start toward expanding reforestation efforts on mined lands, but the program itself still needs some refinement and more resources in order to provide a means for transitioning unemployed coal miners to new jobs located in or near the communities where they live. It should be noted that energy efficiency, distributed energy, and asset-based development provide real and substantial opportunities for economic transition in the coalfields, and these are opportunities that can be created now with little effort, but it will require a significant commitment and strong investment on the part of local, state, and federal policy-makers.

JB: If mountaintop removal was halted tomorrow, what sort of strip mining operations would continue?

RM: The Spruce No. 1 mine in Logan County provides a good example, as does Coal River Mountain in Raleigh County. For Spruce, Arch Coal is able to continue a limited amount of surface mining because they had already begun filling Seng Camp Creek and can continue disposing of the mining waste until they’ve reached the capacity of the fill. The amount of mining Arch will be able to do is limited in that they can only mine as long as they have a valley to dump the waste. The type of mining is still regarded as mountaintop removal mining. For Coal River Mountain, Massey Energy has been able to mine a limited portion of the Bee Tree permit, one of four permits proposed for the mountain. They are also only able to do so because of an existing disposal site, the Brushy Fork coal slurry impoundment.

So I would expect that a limited amount of mountaintop removal mining would continue even if no more valley fills were permitted. However, smaller operations called “highwall,” “contour,” and small “area” mines would likely continue. Such operations still have an impact on the land and streams, though to a much smaller extent. EPA regulation of Clean Water Act permits for valley fills, however, would not limit these smaller forms of strip mining unless the permit required the disposal of the mining waste in streams.

JB: If MTR was halted tomorrow, would it disrupt our power supply–and where would the coal come from?

RM: Mountaintop removal currently provides less than 5 percent of the nation’s electricity, and it occurs in only one basin of about four major coal-producing basins in the nation. Currently, coal-fired power plants on the east coast are importing coal from Northern Appalachia, Illinois, and as far west as Wyoming, Montana, and Colorado, and they always have those resources to draw from. Additionally, many of these power plants are switching to natural gas, something which many of them are able to do automatically. So an end to mountaintop removal would not disrupt our nation’s energy supply. Utilities would be able to obtain coal from other sources and burn natural gas instead, and we’re already seeing those shifts taking place largely due to the fact that Central Appalachian coal is becoming increasingly expensive relative to other sources of coal and fuel.

To be honest, a switch from mountaintop removal coal to natural gas or coal from the Powder River Basin would likely result in lower electricity costs for residents on the east coast, but this is not the best solution for our nation’s energy needs. The price of natural gas will not remain low forever, the prices for coal are becoming increasingly volatile and are getting higher each year, and rising energy costs are beginning to have a real impact on our nation’s ability to compete on the global market. If we want to continue to compete with other countries and keep our economy healthy, we need to move away from fossil fuels and really begin investing in renewable energy such as solar and wind and strong improvements in energy efficiency across all sectors of our economy. This will create hundreds of thousands of new jobs while reducing the human and environmental impacts of our energy consumption and stabilizing energy costs. The nation needs to move in that direction, and Central Appalachia deserves to be an equal part of that transition.

Jeff Biggers is the American Book Award-winning author of Reckoning at Eagle Creek: The Secret Legacy of Coal in the Heartland (Nation/Basic Books), among other books. Visit his website: jeffbiggers.com.