Embattled Egyptian president Hosni Mubarak, whose regime has received billions in U.S. aid, has been in the global media spotlight of late. He’s long been “our bastard,” but he’s not alone.

Let’s take a look at the other dictators from around the planet who are fortunate enough to be on Uncle Sam’s good side.

Biya has ruled Cameroon since winning an “election” in 1983. He was the only candidate, and did pretty well, getting 99 percent of the vote.

According to the country’s Wikipedia entry, “The United States and Cameroon work together in the United Nations and a number of other multilateral organizations. While in the UN Security Council in 2002, Cameroon worked closely with the United States on a number of initiatives. The U.S. government continues to provide substantial funding for international financial institutions, such as the World Bank, IMF, and African Development Bank, that provide financial and other assistance to Cameroon.”

Amnesty International details unlawful executions, journalists being thrown in jail and a host of other nasty business.

As part of a strategy to stifle opposition, the authorities perpetrated or condoned human rights violations including arbitrary arrests, unlawful detentions and restrictions on the rights to freedom of expression, association and assembly. Human rights defenders and journalists were harassed and threatened. Men and women were detained because of their sexual orientation.

Berdymuhammedov came to power in 2006 when his predecessor died and the constitutionally mandated successor was thrown in jail.

According to the State Department, “For several years in the 1990s, Turkmenistan was a key player in the U.S. Caspian Basin Energy Initiative, which sought to facilitate negotiations between commercial partners and the Governments of Turkmenistan, Georgia, Azerbaijan, and Turkey to build a pipeline under the Caspian Sea and export Turkmen gas to the Turkish domestic energy market and beyond–the so-called Trans-Caspian Gas Pipeline (TCGP).” Parade Magazine’s list of the world’s worst dictators notes that “the U.S. continues to import oil from Turkmenistan ($100 million worth in 2008), while Boeing provides airplanes to the Turkmen government. Chevron … opened an office in Turkmenistan’s capital, Ashgabat.”

Human Rights Watch says that while Berdymuhammedov has taken some steps “to reverse some of the most ruinous social policies” of his predecessor’s rule, “the government remains one of the most repressive and authoritarian in the world.”

Thirty-two years ago, Obiang Nguema deposed – and then executed — his uncle, Francisco Macías, in a bloody coup. Peter Maas called him not only “Africa’s worst dictator,” but a man whose life “seems a parody of the dictator genre.”

Obiang … had promised to be kinder and gentler than his predecessor, but in the 1990s, even the U.S. ambassador to Equatorial Guinea received a death threat from a regime insider, the ambassador has said, and had to be evacuated. Not long after that, offshore oil was discovered, but the first wave of revenues—about $700 million—was transferred into secret accounts under Obiang’s personal control.

According to Parade, “The U.S. imported more than $3 billion in petroleum products from Equatorial Guinea” in 2008.

We also imported $3 billion worth of oil from Chad that year. According to the State Department, “The United States enjoys cordial relations with the Deby government. Chad has proved a valuable partner in the global war on terror, and in providing shelter to approximately 200,000 refugees of Sudan’s Darfur crisis along its eastern border.”

Amnesty International’s 2010 report on Chad paints quite a picture:

Civilians and humanitarian workers were killed and abducted; women and girls were victims of rape and other violence; and children were used as soldiers. The authorities failed to take adequate action to protect civilians from attacks by bandits and armed groups. Suspected political opponents were unlawfully arrested, arbitrarily detained and tortured or otherwise ill-treated. Harassment and intimidation of journalists and human rights defenders continued. Demolition of houses and other structures continued throughout 2009, leaving thousands of people homeless.

Despite the fact that Chad’s military has been accused of using child soldiers, Parade notes that “the U.S. continues to train Chadian commandos.”

The thing that makes Karimov so special is his (alleged) penchant for boiling his political opponents to death.

Karimov has been president of Uzbekistan since 1990, when he won the first of a number of rigged elections by a huge margin. Torture, arbitrary detentions and massive roundups of religious minorities are commonplace in Uzbekistan, according to Human Rights Watch. But the country has been a key partner of the U.S. in its “war on terror,” hosting U.S. troops at the Karshi-Khanabad airbase until 2005. Relations cooled somewhat after Karimov encouraged the U.S. to abandon the base, but as Parade notes, “U.S. trade with Uzbekistan doubled in 2008, as Americans continue to import huge amounts of Uzbek uranium, which is used for nuclear power plants and weapons.” The following year “Uzbekistan Airways ordered Boeing jetliners worth about $600 million.”

Ethiopia is a key strategic partner in the “war on terror,” and contributes significantly to African peace-keeping operations. According to the U.S. Agency for International Development, the United States is the largest donor to Ethiopia. Congress passed a law, over the objections of the Bush administration, that restricts military aid to the country until it has a free press and the Zenawi regime improves its human rights record, but – and this is a big but – it exempts aid for “counter-terrorism.” So despite the fact that, according to Amnesty International, Ethiopian opposition groups are illegal, NGOs have been banned and Ethiopians often disappear without trial, the U.S. continues to train Ethiopian troops. 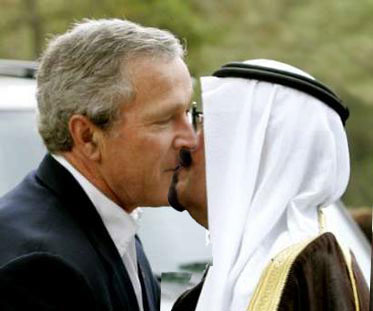 Apparently, when a theocratic Islamic state does horrible things to its citizens, it’s only a big deal if that state is named Iran. Saudi Arabia, of course, is among the United States’ most important allies – the U.S. government has provided security for the Saudi royal family for decades, in exchange for which … oil.

Abdullah has instituted some reforms since taking power in 2005, but Human Rights Watch says the “initiatives have been largely symbolic, with only modest concrete gains or institutional protection for rights.” Amnesty International’s 2010 report charges that the Saudi authorities continue to use ”a wide range of repressive measures to suppress freedom of expression and other legitimate activities.”

Hundreds of people were arrested as suspected terrorists. Thousands of others arrested in the name of security in previous years remained in jail; they included prisoners of conscience. Some 330 security suspects received unfair trials before a newly constituted but closed specialized court; one was sentenced to death and 323 were sentenced to terms of imprisonment.

There you have it — a grand collection of bastards, yes. But remember: they’re our bastards!

This article was originally published on AlterNet.