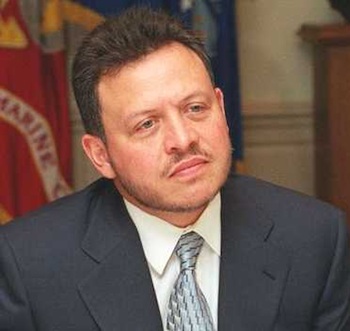 The excitement in Cairo—including the biggest crowd yet today in Tahrir Square—has made it difficult to follow the development of protests elsewhere in the Arab world. We noted that there were actions in Jordan last week, but we haven’t heard from there since. However, today, the Associated Press reports that Jordan’s King Abdullah II has begun to give in to their demands. He has fired his government and appointed a new prime minister—or, actually, a former one, who has also been an ambassador to Israel—to assemble a new cabinet.

On the one hand, this sounds a lot like what Mubarak has done in Egypt: offer to replace one set of yes-men with another. However, the demands of people on the street in Jordan seem to have gone only this far. Reports all seem to indicate that they’re calling for simply the democratic reforms that the king has already begun and promised to continue, not for his abdication outright. The US- and UK-educated King Abdullah has been playing along, at least in words:

The king also stressed that economic reform was a “necessity to provide a better life for our people, but we won’t be able to attain that without real political reforms, which must increase popular participation in the decision-making.”

He asked al-Bakhit for a “comprehensive assessment … to correct the mistakes of the past.” He did not elaborate. The statement said Abdullah also demanded an “immediate revision” of laws governing politics and public freedoms.

When he ascended to the throne in 1999, King Abdullah vowed to press ahead with political reforms initiated by his late father, King Hussein. Those reforms paved the way for the first parliamentary election in 1989 after a 22-year gap, the revival of a multiparty system and the suspension of martial law in effect since the 1948 Arab-Israeli war.

But little has been done since.

This is more remarkable evidence of how careful and tactical this wave of protests has been. In Egypt, activists know that Mubarak can’t be trusted to remain in power and refuse to accept anything less; in Jordan, they appear to believe that making more measured demands of their own autocrat is the more promising approach. In both cases, the power of the people is being felt.