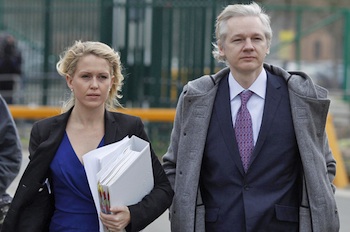 An English court has ordered Julian Assange, the founder of whistle blowing website WikiLeaks, to be extradited to Sweden over sex crimes claims.

Howard Riddle, the judge at Belmarsh Magistrate’s court in London, said on Thursday that the allegations of rape and sexual molestation brought by two women were extraditable offences and that a Swedish arrest warrant was properly issued.

Lawyers for the 39-year-old Australian said they would be contesting the decision, having previously argued that Assange would not be given a fair trial in Sweden and could face extradition to the United States.

Mark Stephens, representing Assange, said his team remained optimistic about “opportunities on appeal” and said he was hopefuly that the matter would be resolved in Britain.

The website founder now has to find more bail to make sure he does not abscond, and is likely to have to continue to wear an electronic tagging device, which his lawyer says is a contravention of his rights.

Speaking after the ruling, Assange  reiterated his innocence and criticised the conditions imposed on him.

“On February 20 the US ambassador to the UK told the BBC that the US, in relation to its ongoing investigations and attempts to charge me with espionage, would have to see what happened here today.

“Why is that? What does the United States have to do with a Swedish extradition process?”

Assange’s mother has described the court order for his extradition as “political and legal gang rape”, the Australian Associated Press reported.

“The greatest fear I have is that the Western world in its effort to shut up someone who’s telling the truth to the people of their countries will breach every piece of legislation in order to get him and will co-operate across borders to do so,” Christine Assange said.

Assange has previously said that the claims against him, which he denies, are politically motivated and attempts to smear him and his website.

But in Sweden, Claes Borgstrom, the lawyer representing the two women making the claims, said it was a shame the decision had taken so long.

“[Assange] will probably appeal this decision for some reason that is hard to understand. He claims that he hasn’t committed a crime so he should just come here and sort it out,” he said.

Bjorn Hurtig, Assange’s Swedish lawyer, told the AP news agency that the Australian had “great chances of being freed” in Sweden.

“And I’ll be waiting for him, ready to fight for him tooth and nail,” he said.

Fears of US extradition

Swedish prosecutors issued an international arrest warrant for Assange last year for questioning over allegations of sexual misconduct, which he flatly denies.

Two women have made claims against him, one alleging that he sexually molested her for refusing to wear a condom, and the other that he had sex with her while she was asleep.

Assange’s legal team argued during three days of hearings earlier this month, that the Swedish prosecutor had no power to issue a European arrest warrant, and that the charges did not amount to extradition offences.

But lawyers representing Sweden said the warrant complied with legal requirements, and dismissed suggestions that Assange could be extradited to the US, saying Britain would have to give its consent.

Assange has been in the public spotlight since his website WikiLeaks began releasing secret US military and diplomatic files.

His lawyers have argued that he would not face a fair trial in Sweden, with rape cases often held behind closed doors, and that if eventually extradited to the US, he could be sent to Guantanamo Bay or even face the death penalty.

However Riddle on Thursday said it was wrong for the defence to raise the question of a possible extradition to the US or to imprisonment in Guantanamo Bay given the absence of any evidence that Assange risks torture or execution.