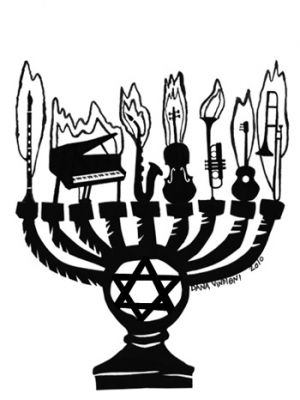 Blacks and Jews have been among the most hated peoples in the history of the world. One manifestation of this shared bond is the alliance between Jews and blacks in the civil rights movement.

Another way these two communities are intertwined is in musical history. The stories of Jews as fans and emulators of Afro-American music have been well told, along with their role as entrepreneurs recording black artists from blues to hip-hop. A new CD, Black Sabbath: The Secret Musical History of Black-Jewish Relations (The Idelsohn Society), spotlights a little-known third dimension: Jewish influence on black musicians.

The album contains 15 recordings of black artists doing traditionally Jewish or Jewish-inflected material, from Billie Holiday’s home-recorded version of “My Yiddishe Momma” to Johnny Mathis singing the Yom Kippur prayer “Kol Nidre.” Their motives were a mix of artistic, empathetic and commercial. The liner notes quote Ethel Waters saying the Jewish history of “age-old grief and despair is so similar to that of my own people that I felt I was telling the story of my own race too.” Then again, she’d also pack theaters with Jewish people who’d excitedly exclaim “the
schvartze sings ‘Eli, Eli’!”

Some of the music here is very kitschy, novelty or showtune-style records aimed at the suburban Jewish culture of the Rat Pack, Mad Men era, a world bookended by Exodus and Fiddler on the Roof. The Temptations’ 10-minute medley of songs from Fiddler is not something I’m likely to play much in the future, despite its good bassline and inimitable Temptations harmonies; ditto for Lena Horne’s adaptation of the “Hava Nagila” melody into a liberal civil-rights anthem. On the other hand, I like Cab Calloway’s jive-talking anglicization of the Yiddish song “Ot Azoy.”

When these songs work they have the best of both worlds, Jewish neshuma and black soul. Billie Holiday transcends the gooey sentimentality of “My Yiddishe Momma” by singing it like herself, a tour de force of love, regret and compassion. (The performance was intended to amuse a friend’s baby.) Cannonball Adderley’s brilliant “Sabbath Prayer,” an instrumental from Fiddler, sounds like an impassioned, more structured outtake from Miles Davis’s Kind of Blue.

That unveils the deeper, more subtle influences Jewish music has had on jazz. Miles’ modal explorations may have been inspired by seeing klezmer clarinetist Dave Tarras play in the Catskills. Louis Armstrong grew up singing with Russian-Jewish immigrants in New Orleans, and you can hear the connection in the minor-key laments of “West End Blues” and “What Did I Do to Be So Black and Blue.” The bent notes of the blues parallel the krekhts of klezmer.

Klezmer Against the Wall

Most current klezmer musicians avoid talking about the Middle East. There is no political subject harder to have a rational discussion about, especially within the Jewish community. Saying that Palestinians have human rights and legitimate grievances will get you denounced as a “self-hating Jew” feeding terrorism and “delegitimization” in many Jewish circles; while in many leftist/progressive circles, saying that Israel has a right to exist in peace will get you shlogged with spiels about Zionist occupational atrocities. The klezmer revival of the last 35 years has had elements of a Yiddishist, secular counterweight to the theocratically fanatical nationalism of the Jewish right, but its musicians and audience range from atheist to Hasidic.

Into this mix drops Klezmer Against the Wall (RWE), a compilation of 15 klezmer bands from the U.S. and Europe who “support opposition to Israeli apartheid and occupation through nonviolent protest, targeted boycotts, civil disobedience, and direct action.” Nu… so what’s the music sound like?

I tend to prefer the more traditional-style material, such as the Just Desserts’ “Freylekh” and Inner Fire District’s “Symposium of Crabs,” a melange of familiar hooks and melodies; they’re not earth-shaking, but they’re played with passion and drive. The more modernistic, complex cuts veer into excessively busy jazz-fusion or Zappaesque turf, although I can imagine the Free Radicals’ “Mosh Hashanah” growing on me. The update I like best is Go Van Gogh’s “Oif der Fater,” which melds a soulful Yiddish melody with a guitar-chinking funk-reggae groove.

When klezmer drummer Elaine Hoffman Watts returned to playing in the early ’90s, she was greeted like a long-lost blues artist. Hoffman comes from a leading family in the Philadelphia klezmer world: She’s the granddaughter of bandleader Joseph Hoffman, the daughter of percussionist Jacob Hoffman, and the mother of trumpeter Susan Watts. She was one of the few women drummers anywhere in the ’50s, although her career encountered resistance from those retrograde souls who believed she lacked an essential body part (one it would be quite painful to hit a rimshot with).

Now a grandmother, she has a new album out, Elaine Hoffman Watts: A Living Tradition (Living Traditions). At her recent show on the Lower East Side with her daughter Susan Watts, there were several klezmer drummers in the house. Hoffman Watts is a drum virtuoso, but always in the service of the song, from quasi-martial rolls to propel a dance groove or dramatize a slow waltz to the tom-tom counterpoint on her version of Naftule Brandwein’s “Araber Tanz.”

Playing with her daughter offers plenty of opportunities for family shtick. At the LES show, she quipped that Susan hired her “because I work cheap.” Meanwhile, in the liner notes to an earlier album, Susan Watts confesses that her illustrious forebears “were all a little meshugah.”