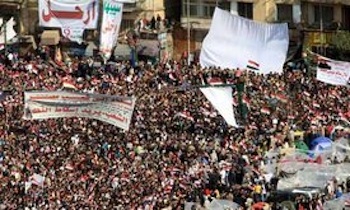 This article was originally published on CommonDreams.org from Al Jazeera English.

Egyptian labour unions have gone on a nationwide strike, adding momentum to pro-democracy demonstrations in Cairo and other cities.

Al Jazeera correspondents, reporting from Egypt, said around 20,000 factory workers stayed away from work on Wednesday.

“It is a significant gain for the pro-democracy supporters” if the unions get involved in demonstrations, Al Jazeera’s Hoda Abdel-Hamid reported from Cairo.

Determined protesters are continuing to rally in Cairo’s Tahrir (Liberation) Square, and other cities across the country. They say they will not end the protests until Mubarak, who has been at the country’s helm since 1981, steps down.

Protesters with blankets gathered outside the parliament building in Cairo on Wednesday, with no plan to move, our correspondent reported. The demonstrators have put up a sign that reads: “Closed until the fall of the regime”.

The government seems to be scrambling under pressure from major powers and pro-democracy supporters, Al Jazeera’s Stefanie Dekker reported from the city.

She said people in Tahrir Square were angered by a visit from Tamer Hosni, a famous Arab pop star, on Wednesday morning.

Hosni previously made statements telling the demonstrators to leave the square, saying that Mubarak had offered them concessions. “His comments really did not go down very well,” our correspondent said. The crowd reacted angrily and the military had to intervene to keep them away from him.

Another Al Jazeera correspondent, reporting from Cairo, said there was also a renewed international element to the demonstrations, with Egyptians from abroad returning to join the pro-democracy camp.

There is even an internet campaign aimed at mobilising thousands of expatriates to return and support the uprising, our correspondent said.

Protesters are “more emboldened by the day and more determined by the day”, Ahmad Salah, an Egyptian activist, told Al Jazeera from Cairo on Wednesday. “This is a growing movement, it’s not shrinking.”

Mubarak’s message has thus far been that he will not leave until his term expires in September.

As a gesture of goodwill, however, 34 political prisoners, including members of the banned Muslim Brotherhood opposition group, were reportedly released over the past two days.

Dekker, our correspondent, reported that there are still an unknown number of people missing, including activists thought to be detained during the recent unrest, while Human Rights Watch reported that the death toll has reached 302 since January 28.

Egypt’s health ministry denied the figures, however, saying that official statistics would be released shortly.

Omar Suleiman, the Egyptian vice president, warned on Tuesday that his government “can’t put up with continued protests” for a long time, saying the crisis must be ended as soon as possible.

Suleiman said there will be “no ending of the regime” and no immediate departure for Mubarak, the state news agency MENA reported from a meeting between the vice-president and independent newspapers.

At one point in the roundtable meeting, he warned that the alternative to dialogue “is that a coup happens, which would mean uncalculated and hasty steps, including lots of irrationalities”.

When pressed by news editors to explain the comment, he said he did not mean a military coup but that “a force that is unprepared for rule” could overturn state institutions, said Amr Khafagi, editor-in-chief of the privately owned Shorouk daily, who attended the briefing.

Response to Suleiman’s statements was grim.

“He is threatening to impose martial law, which means everybody in the square will be smashed,” said Abdul-Rahman Samir, a spokesman for a coalition of the five main youth groups behind protests in Tahrir Square.

“But what would he do with the rest of the 70 million Egyptians who will follow us afterward.”

Earlier on Tuesday, Suleiman said a plan was in place for the peaceful transfer of power, which included forming three committees  – one to propose constitutional amendments, another to oversee the implementation of the amendments and a third to investigate the violent clashes of February 2.