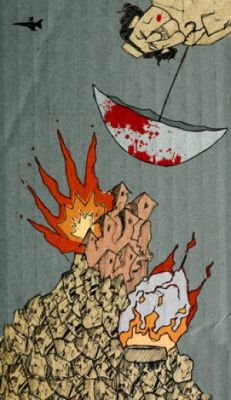 If you think Libyan leader Muammar Gaddafi is stupid, much less crazy, think twice. He was the first to sense and assess correctly the ripple effects of what happened in Tunisia on 14 January 2011. He was fully cognizant and apprehensive of its implications for Libya and, above all, for his 42-year record of autocratic rule. To understand Gaddafi’s overall manipulative tactics of the Libyan uprising, namely his attempt to deflect its homegrown roots, it is worthwhile to revisit his reaction to the Tunisian revolution.

On 15 January 2011, one day after Tunisians ousted long-time dictator Zine el Abidine Ben Ali, Gaddafi was the first Arab head of state to comment on the Tunisian revolution. Wearing a black shirt, and showing a haggard, pallid face, weighted by anguish, he appeared on the national Libyan TV channel Aljamahiriya and addressed himself directly to the Tunisian people.

As customary of his improvisational style, which literally embodies the absurdities and eccentricities of his entire regime, Gaddafi’s remarks were random, disjointed and unpersuasive even though his warnings to Tunisians were partly right, particularly if judged against the backdrop of the manipulative practices of the current interim government in Tunisia which has shamelessly co-opted the revolution and slighted the spirit of the revolutionaries. Let’s pray and hope, though, that the ongoing, around-the-clock sit-in mass protest in the Qasbah Government Square in Tunis succeeds in putting the revolution back on the right track.

Gaddafi said he was pained by Ben Ali’s unceremonious exit and spoke at length about the shortsightedness of Tunisians who wasted their lives for nothing, just to get rid of a corrupt president. He chided them for being misled by WikiLeaks (which he called “Kleenex”) into destroying their country and putting the future of their children on the line. After expressing his distrust of any form of social media, Gaddafi turned to pay homage to Ben Ali, whom he refers to as “Zine”:

“I do not know anyone from Bourguiba [Tunisia’s first post-independence president] to Zine, but Zine for me is the best for Tunisia. He was the one who gave Tunisia pride of place [in terms of economic growth]; I don’t care whether you like him or not, whether you’re against him or not; I tell you the truth, regardless; do you think that Zine gives me money, glory or any kind of reward for saying this? He gives me nothing, but I tell you the truth. I’m usually candid with the Arab public, pointing out the truth to them. No one is better than Zine at the moment. What I wish is not for Zine to remain in power till 2014 [which is one of the concessions/promises Ben Ali made in his third and last speech before his flight to Saudi Arabia] but for him to remain in power for life, okay! If anyone close to Zine is corrupt or if Zine himself is corrupt, they should stand trial. Bring your evidence and try them; this is usually a normal practice. But it’s inadmissible that whenever there is corruption, we burn our country and kill our children at night. Ala Tunis al-salaam.”

Gaddafi ended his speech by saying ala Tunis al-salaam, which is a pun on “peace upon Tunisia,” but practically means in this context, “Tunisia’s doom is upon us.” Ala Tunis al-salaam is a corruption of ala al-duniya al-salaam, which is a common idiomatic expression that originates in Islamic theology on the end of days and is used to evoke a sense of the approaching end of times. The gist of Gaddafi’s speech is twofold: to debunk the rationale on which the Tunisian revolution hinges and to profess the collapse of Tunisia as a nation state.

Gaddafi’s unsolicited comments on the Tunisian revolution constituted a travesty of the will of the Tunisian people and of the memory of its martyrs; Tunisians felt insulted and angered by what he said and, therefore, vindicated when they saw many Libyans in al-Bayda city taking to the streets the following day to protest against socioeconomic malaises created by his regime and by the decades-long unbalanced distribution of oil revenues. It’s worth noting here that Libyans were indeed the first who felt compelled and inspired by what happened in Tunisia; these early demonstrations, however, were somewhat visceral and hesitant; they lacked the assurance and confidence that the Egyptian revolution brought in its wake.

The importance of Gaddafi’s speech on the Tunisian revolution lies ultimately not in terms of what it said about Tunisia but in terms of what it did not say about Libya. Inversely, what Gaddafi did not say about Libya, he projected on Tunisia. Consider, for instance, his insistence on the exceptionality and exemplarity of Ben Ali: “There is not anyone better than Ben Ali at the moment for Tunisia and if it were up to me I would want him to continue not till 2014 but for life.” What holds the key to this statement is the “if it were up to me” hypothesis that underwrites it. Gaddafi implies that while it is not up to him to appoint Ben Ali president for life in the case of Tunisia, it is certainly up to him in the case of Libya to stay in power for the rest of his life, or so, at least, he hoped to plead with or make clear to Libyans.

The fact that Gaddafi reacted immediately to the overthrow of Ben Ali in ways that contradicted the will of the Tunisian people is expressive of his fear that what happened to Ben Ali might very well happen to him. Thenceforth he was obsessed and bedeviled by what might be called the curse of Ben Ali. He identified with Ben Ali not in order to redeem him but in order to justify his own longevity in power. He trivialized the value of the Tunisian revolution not because he felt Libya is immunized against it but because he reckoned how ripe Libya is for it after 42 years of his rule, almost twice as long as Ben Ali’s. He went on and on discrediting social media and WikiLeaks not because they were negligible and untrustworthy but because they charted new fields of mobilization and dissent that he can neither overcome nor completely disregard.

Gaddafi knew then that he was not immune to Ben Ali’s curse and he did not leave any stone unturned to immunize himself against his fate. His overall strategy revolved initially around the vilification of the Tunisian revolution. He not only undermined its accomplishments but also was proactive in highlighting its negative repercussions. The rumors that swirled around his involvement along with Leila Trabelsi, Ben Ali’s wife, in staging the influx of clandestine migrants to Lampedusa, Italy, have a ring of truth to them. While Trabelsi wanted to create a state of turmoil in Tunisia so as to smuggle the rest of her family out of the country, Gaddafi wanted to show Libyans a fresh example of the ugly byproducts of popular unrest in Tunisia, particularly after the fall of Mubarak.

No wonder, then, that the boats used by the clandestine migrants (who self-identified as political refugees) were sent from Libya; no wonder that most of these refugees were either runaway prisoners or mercenaries who were all asking for political asylum or refugee status in Italy, and no wonder that Gaddafi felt reassured that the psychological war he was waging against his people was effective; at any rate, there were no other protests of note anywhere in Libya since the al-Bayda protests that took place after his speech on Tunisia until widespread protests broke out last week.

Tarnishing the Tunisian revolution went hand-in-hand with his attempt to point to a foreign conspiracy against Tunisia. In an interview on Nessma TV on 25 January, on the very same day that the Egyptian revolution officially started, Gaddafi alluded to certain foreign forces preying on Tunisia but did not give any further specifications; when he was pushed to name names, he pointed out that those should be understood from his allusions. The usual suspects in the case of Tunisia are France and the United States, but that is not the case with Libya. Despite his preemptive campaigning against the contagiousness of the Tunisian revolution, Libya is now swept by the same revolutionary current that transformed both Tunisia and Egypt.

As peaceful demonstrations in Libya continue to spread across the country, Gaddafi is doing exactly what he implied he would do in his speech on Tunisia. First, he’s terrorizing the population, killing as many Libyans as he can, not only because he wants to show he is willing to do this but also because he wants to dare Libyans to willingly pay the price for their revolt. Second, Gaddafi is deflecting the genuine grievances at the origin of the popular uprising and is instead pointing fingers to Tunisians, Egyptians and Palestinians as the architects of the widespread demonstrations.

At the very same time that Libyans were being burned alive by fighter jet rockets and bombs on 21 February, national Libyan TV, Aljamahiriya, was running staged confessions by Tunisians who were involved in circulating leaflets inciting Libyans to rise up against their government or distributing so-called “demonstration pills,” that is, pills that would propel those who take them to engage in demonstrations and to destroy government buildings, etc. Clearly, Gaddafi’s men/mercenaries are preying on foreigners in Libya: they capture them, beat them up and bring them in front of a camera and force them to say what they want them to say. In addition to terrorizing Libyans from the skies, Gaddafi is defusing the legitimate and homegrown forces that are leading Libya’s glorious revolution.

When Gaddafi first commented on the Tunisian revolution, he pointed out the yawning gap between the high price paid for it (the hundreds of men and women killed) and the meager gains brought through it (changing one president for another and appointing one government in place of another). In other words, he questioned whether it was worth it for Tunisians to bring tragedy and grief upon themselves only to reap nothing but a farcical reshuffling of the same old system. Gaddafi’s strategy in Libya is to blur completely the dividing lines between the tragic and the farcical. This holds true even for the latest TV appearances of Gaddafi and son, which add nothing but farcical insult to tragic injury.

To use heavy artillery and fighter jets (Mirage and Rafael) to attack unarmed civilians might seem absurd when you ponder it for a while, yet it is tragic when you see it actually happening. By playing on the constant slide of the tragic under the farcical, Gaddafi does not only want to hold on to his 42-year long omnipotence, but to force Libyans along with the international community to submit to it. To be able to understand and support our Libyan brothers and sisters today, let’s take the farcical out of Gaddafi. Libya’s tragedy can no longer continue to be Gaddafi’s farce.

Nouri Gana is Assistant Professor of Comparative Literature and Near Eastern Languages and Cultures at the University of California, Los Angeles. His book, Signifying Loss: Toward a Poetics of Narrative Mourning, was just published by Bucknell University Press, 2011.