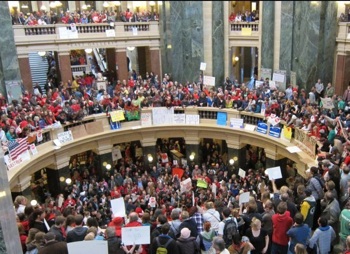 MADISON, WIS.—The crowds demanding that Republican Gov. Scott Walker “kill the bill” he proposed to eviscerate collective bargaining rights in the state have grown larger by the day here, with numerous estimates putting Saturday’s attendance around 60,000. But despite workers ratcheting up the pressure in the streets, and unions making clear they are willing to accept pay and benefit concessions, Walker has shown no intention of leaving collective bargaining rights intact.

The governor’s refusal to budge on public workers’ ability to have a collective voice on the job has made many wonder if the governor actually wants to solve the budget crisis, or simply wants to strip workers of their basic rights.

In public testimony in the capitol building and on Madison’s streets throughout this week’s protests, public workers have insisted that collective bargaining is about much more than pay and benefits. They say it’s about democracy and their ability to do their jobs safely and better serve the public.

Perhaps the biggest group on the streets here is public school teachers, who have called in sick en masse throughout the state. Schools in Madison were canceled for three days straight during the week, and the capitol is packed with educators. (A vote on the bill has been delayed indefinitely until 14 Democratic state senators return to the capitol; they fled town Thursday.)

Mary Schliem drove to Madison from Platteville, Wis., on Saturday. She has been a teacher there for 34 years, and feels her ability to be an effective teacher is under attack in Walker’s bill.

When asked if she thought her daily time to prepare lesson plans for classes would be lost with the bill, Schliem responds, “of course.” Class sizes, too, she says, will increase. “If we have classes of 35 or 40 kids, that will negatively impact our ability to educate,” she claimed. She sees  her ability to collectively bargain as a crucial to her ability to do her job well.

“We need somewhere to express what we’re thinking and feeling as a group. We need to be able to say, ‘Oh, 98 percent of our members think and feel this way? Maybe we need to be concerned.’”

Her co-worker, Mary Hardyman, a Platteville teacher for 32 years, chimed in. “We went into this because we love kids. We come early. We stay late. We take home gobs of work. We put in thousands of extra hours. And we don’t feel like we’re getting any support for that” from the governor. She stopped as her voice broke and her eyes began to well up.

The women picked up their signs and disappeared back into the massive march around the capitol.

Teachers have had a huge presence here, but teachers assistants (TAs) have also played a huge role in the protests for the last week. Notoriously overworked and underpaid, protesting graduate students from Milwaukee and Madison have operated out of a commandeered conference room on the third floor of the capitol.

On King Street in front of the capitol Saturday afternoon, Katie Morrissey stepped away from the mass march. She is a teachers assistant at the University of Wisconsin-Milwaukee, where she is a graduate student in the English Department. The Walker bill would hurt all TAs, she said. “If we don’t have any resource to say we’re being overworked, that’s a big problem,” she said.

Morrissey, like other TAs, has a tuition remission in exchange for her work teaching classes. If she lost her ability to collectively bargain, that remission would be in danger. “I might have to leave school,” she says. “I don’t think I could continue being a TA. I think many TAs would not be able to continue.”

Katy-Anne Legun is also a TA, a grad student in sociology at UW-Madison and a member of the Teachers Assistant Association union. Sitting outside the TAA war room as sleep-deprived grad students streamed in and out, she stressed the importance of the union, and how Walker bill’s threatens its existence.

“We would have to spend so many of our resources every year securing membership—organizing new members,” she said. The bill would make maintaining union membership extremely difficult. “Our union would not survive if the bill passed. It will be economically impossible—we wouldn’t have the resources to advocate for our rights.”

In addition to negotiating wages and benefits, the TAA ensures faculty are treating TAs fairly, and generally works to address work-related concerns.

“It’s crucial to have something representing you, so you don’t just have your lone voice out in the wilderness. We can’t advocate for ourselves individually—we need our voices to be part of a union,” Legun stated.

Teachers have been some of the most villified public employees in recent months, but the streets of Madison are packed with public workers of all stripes, from social workers to janitors.

And respiratory therapists, which is Anne Stoddard-Wheelock’s occupation at the University of Wisconsin Hospital—“taking care of the sickest patients in the state,” as she puts it. Standing on a corner outside the capitol, she wears a bright green AFSCME t-shirt, and is a member of Local 1942. As a thunderous marching band trooped past, she shouted to explain what collective bargaining has meant for her and her co-workers.

“It’s meant that we can limit our hours and not be put into dangerous situations at work,” she explains. Through union negotiations, respiratory therapists have ensured that they have a mandatory eight hours off after a shift, so as not to overwork themselves and put their patients in danger.

“When you’re sick enough, I will be your heart and your lungs. But if I’m forced to take more patients than is necessary, I can make mistakes. And that would be shameful.”

So if collective bargaining is not just about money, but rather working conditions and democracy on the job, why are Gov. Walker and Wisconsin Republicans insisting that it be included in an ostensible effort to balance the state’s budget?

Multiple reports indicate that union leaders are willing to offer concessions, but not the ceding of collective bargaining rights. The Wisconsin State Journal reported that AFSCME Council 24 executive director Mary Bell was willing to take cuts to help plug the budget gaps, but her members need to be able speak together as a union.

“We want to say loud and clear — it is not about those concessions,” Bell said. “For my members, it’s about retaining a voice in their professions.”

At a press conference today, Tom Innes, an EMT in McFarland, Wis., stressed that public employees are willing to work with the governor, but that sentiment has not been reciprocated. “We want our fellow taxpayers to know we are willing to make sacrifices,” said  Innes. “We have offered our hand, but they have slapped it away.”

The obvious question, then, is: What are the governor’s true intentions?

If workers are willing to accept some painful cuts to pay and benefits to help balance the budget, but Walker is not willing to sit down to negotiate with them, what exactly does Walker want with? Is he attempting to end a budget crisis—or is his insistence on gutting collective bargaining rights simply about ending workers’ rights to be heard at their job?