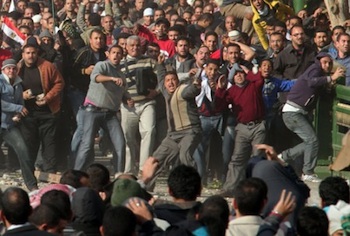 Since the revolution exploded in Egypt, international labor activists have condemned the state’s crackdown on protesters and voiced global support  for immediate democratic transition. So how is the labor solidarity playing out on the streets of Cairo?

This week as the peaceful occupation of Tahrir (Liberation) Square spiraled into a bloodbath, the International Trade Union Confederation (ITUC) issued a statement “[condemning] the instruction given by the regime to employees of the government and state enterprises to join the violence against those seeking change, as well as the dismissal of employees who have joined the peaceful protest movement.”

Could the Egyptian working class be getting turned against itself? Is the dictator trying to deploy public workers or yellow union thugs to do his dirty work?

The co-optation of labor to serve authoritarian ends is an old, sad story; there have been well-documented incidents around the world of workers acting as political instruments or stooges. The tactic is not only effective in crushing dissent but also in sowing distrust within the working class and hollowing the opposition.

In today’s Egypt, however, James Parks at the AFL-CIO blog sees sparks of hope in the nascent independent union movement, which on January 29 proudly endorsed the “unified demand”of the Egyptian people for a complete overthrow of Mubarak’s regime.

To outside observers, the role of unions in the Egypt’s political future is of course hard to gauge, but the fraught labor history of North Africa’s declining industrial powerhouse offers some daunting lessons.

A 2010 report by the AFL-CIO Solidarity Center traces Egyptian labor’s travails throughout the nation’s many political phases. Labor activism wove throughout the state’s political and social struggles after World War II. In 1947, when 26,000 textile workers struck at the state-owned Misr Spinning and Weaving Company (Ghazl al-Mahalla), efforts to establish an independent union was crushed from within:

The immediate cause of the strike was fear of large-scale layoffs and a new schedule of fines for infractions of discipline. But the underlying issues were two decades of management’s harsh and arbitrary labor control methods and its imposition of a pro-company, or “yellow” union on the workers.

After a month-long strike, the Labor Department agreed to hold elections for a new union. The pro-company union executive committee conducted an anti- Semitic election campaign claiming that Jewish communists had instigated the strike. Before the balloting, police arrested or interrogated nearly 300 workers. Unsurprisingly, the yellow union remained in office.

A few years later, workers were again quashed, this time directly by the boot of the state:

On August 12 and 13, 1952, the 9,000 workers at the Misr Fine Spinning and Weaving Company conducted a strike and demonstration seeking a freely elected union (a pro-company, yellow union had been established in 1943), removal of several managers considered particularly abusive, and the satisfaction of economic demands.

Despite the workers’ proclaimed support for the new regime, the army quickly intervened to crush them. A rapidly convened military tribunal convicted 13 workers. Eleven received prison sentences; Mustafa Khamis and Muhammad al-Baqri were sentenced to death and executed on September 7.

Jan Lucassen’s global analysis of labor movements places Egyptian trade unionism in a geopolitical context. During the post-colonial resurgence under Nasser, he writes, “the Nasserist state had taken control of the trade union movement, purged it of communist influence and virtually incorporate it into the state apparatus.” Then the state-controlled union structure persisted long after the principles of economic collectivism had withered.

After Nasser’s death in 1970, his successors Anwar al-Sadat and Husni Mubarak abandoned his socialist rhetoric and his orientation toward import-substitution industrialization, opened the Egyptian economy to foreign (Arab and Western) investment and imports, and eventually moved toward privatization and even reversal of the Nasser regime’s land reform program. There were, and continue to be, significant mobilizations of workers seeking higher wages and better conditions or resisting privatization of state enterprises, with varying degrees of success; but organized labor as a social force, and the left with it, is quite weak in Egypt.

The disintegration of the secular left has opened the door for Islamist movements to posture themselves as the leading opposition forces, Lucassen concludes.

The launch of the independent labor coalition and the protesters’ call for a general strike suggests that the protest movements could bring labor to the fore if a truly democratic regime is instituted.  Samer Shehata, a professor of Arab politics at Georgetown University, said on Grit TV that labor activists were participating in the upheaval and had helped stoke protests in previous years, but other communities in the diverse opposition had taken the lead.

We may draw political lessons from elsewhere in the region. Though many analysts have made clear that the Egyptian uprising is dramatically different from the situation in Iran, the political and social tensions faced by the labor movements of both countries could have some parallels. Iranian workers’ movements too have been weakened by political suppression and marginalization by state-controlled “Workers Councils.” Ian Morrison at Tehran Bureau explained that the working-class opposition faces a complex dilemma of economic policy: in a reformed democratic system, what should be the role of “state control of industry–traditionally part of a pro-union political platform–” in a society where the state’s economic dominance has historically presided over massive poverty and inequity?

Though Egypt’s mass protests have been driven by deep economic unrest, the uprising has so far remained relatively non-ideological and focused on basic political and civil rights. Perhaps when the time comes for Egypt’s revolutionaries to broach questions of income inequality, social development policy, and international trade, labor organizers will finally have an opportunity to advance an economic justice agenda that replaces authoritarianism and crony capitalism with working people’s priorities. After decades of suppression, the workers in the crowd at Liberation Square should be ready to rise to the occasion.