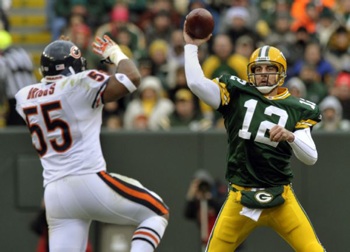 The Green Bay Packers upset victory over the Pittsburgh Steelers in this year’s Super Bowl drew 111 million viewers, the most in U.S. television history. It may also be the last look fans get at pro football for a long time.

The collective bargaining agreement between players and owners expires March 3 and the owners have been preparing to lock out the players for up to several years in order achieve hard-ball demands that would make your average robber baron blush: a billion dollars a year in player givebacks and expanding the regular-season schedule from 16 to 18 games despite growing awareness of the alarming injury rates suffered by football players. The owners claim player salaries are putting the league in financial peril but have refused to open their books.

“We’re watching the most powerful men in America tell workers to work longer for less pay,” said sports columnist Dave Zirin. “This is huge for everyone.”

The NFL has never been more popular and its revenues have continued to surge during the Great Recession. According to Forbes, it is a $9 billion annual industry and individual teams are worth an average of slightly more than $1 billion. The median player salary is $770,000 but the average length of an NFL player’s career is only 3.4 years. Former players who suffer from crippling injuries (including sky-high rates of dementia) are frequently sacked by post-retirement healthcare costs.

Players who wash out of the NFL before their fourth season receive no post-retirement health insurance coverage from the league. Those who do endure long enough to become vested in the league’s health insurance program only receive coverage for the first five years after they stop playing despite often being saddled with conditions that make it difficult to obtain other healthcare coverage.

The players may be the game. But if this labor conflict was the Super Bowl of collective bargaining, they would be two-touchdown underdogs. The owners negotiated their network television contracts so that they will still rake in $4 billion next season even if a single game is not played. The NFL also has cultivated political support inside the beltway where it has spent nearly $5.5 million on congressional lobbying since 2006, according to The Washington Post, and recently shoveled $680,000 in donations to key allies on Capitol Hill through a political action committee.

For the players, a prolonged lockout means losing earnings from what is already a short career. Current players and their families also face losing their healthcare coverage once a lockout begins. Similar dynamics worked against the players in the NFL’s last labor stoppage in 1987 when star players such as Joe Montana, Steve Largent and Randy White crossed their teammates picket lines to play with little-known scabs. That strike collapsed in less than four weeks.

For the players, winning public support will be key. The NFL Players Association (NFLPA) is a member of the AFL-CIO and has received vocal support from labor leaders who note that a strike would also affect 25,000 people who work at stadiums during the season. In November, it announced its local chapters will fully affiliate with all AFL-CIO state federations and the central labor councils.

“The circumstances may be different, but the need for workers to stick together is the same everywhere, whether it’s at NASA, at Delta Air Lines or the NFL,” said Thomas Buffenbarger, President of the International Association of Machinists and Aerospace Workers (IAMAW). NFL players in turn have appeared at events in support of IAMAW workers facing layoffs in Florida and Louisiana.

Players will also be using social media to communicate directly with their fans. On Jan. 18 the possible NFL lockout became a trending topic on Twitter when players from across the league sent tweets (#LETUSPLAY) and Facebook messages to their fans.

Striking workers (or locked-out workers, as the case may be) are often skewered in the media as lazy and undeserving. However, the combination of the owners’ sheer greed and public sympathy for athletes who sacrifice their bodies on national television every Sunday for five months may yet swing public support behind the players and force the NFL to back down.

“As fans remove the fingers from their ears and the blindfolds from their eyes and start to accept the fact that America’s favorite game is inching ever closer to Armageddon, this is what you’re starting to see, and hear, and feel, more and more,” Vacarro recently wrote, “Good for the players. And to hell with the owners.”

The NFL is a big business and the league’s owners know how to cash in: A favorite ploy is threatening to move a franchise to another city in order to shake down taxpayers for an expensive new stadium.

Then there’s the Green Bay Packers. The four-time Super Bowl champs play their home games in a city of 101,000 people where they were founded in 1919 and won’t be leaving for greener pastures. The team is a nonprofit corporation owned by its fans.

About 112,000 stockholders control 4.75 million shares in the team and no stockholder can own more than 200,000 shares. The team is governed by a seven-member executive committee, elected from a 45-member board of directors. If the team were ever to be dissolved it funds would be donated to local charities through the Green Bay Packers Foundation.