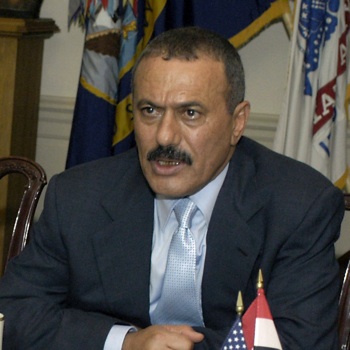 In recent months, large protests have unfolded in the Yemeni capital of Sanaa and other major cities across the country. The protests have been organized by a cross-ideological amalgam known as the Joint Meeting Parties (JMP), and have been identifiable by their deployment of pink-tinted protest paraphernalia – sashes, hats, posters, flyers and more.

These protests seem to have generated substantial concessions from President ‘Ali ‘Abdallah Salih, who has occupied some form of executive office since 1978. (Modern-day Yemen came into existence in 1990 with the unification of North Yemen, of which Salih was president, and the socialist South.) Salih pledged on Feb. 2 to abandon efforts to run again or engineer the succession of his son, Ahmad, to the presidency. Much as these steps might appear to presage far-reaching political change in Yemen there are good reasons for skepticism.

The demands of the political opposition in Yemen align in some ways with those of pro-democracy protesters in Tunisia, Egypt and elsewhere, but in many more ways they diverge. And like his fellow autocrats, Salih has many tools for staving off the sort of reform that would strip him and his inner circle of power.

The Yemeni opposition has coalesced for nearly a decade around an alliance of leftist, secular liberal, nationalist and various Islamist trends, the JMP, whose programs do not always match up.

The leadership of the Yemeni Socialist Party, for example, is divided over whether and to what extent to align with the demands of the Southern Movement (also called al-Harak), the grassroots grouping agitating for greater autonomy for the southern provinces and, increasingly, secession. Islah, the largest Islamist party in the JMP, is split over, among other issues, the role of women in the party and in Yemen’s larger political sphere. Each of these divisions divides the alliance and the parties within it – and the regime deftly exploits the gaps.

The opposition has been systematically undermined by the Salih regime, which is employing stepped-up U.S. military aid to expand the security services capacity for surveillance and coercion. While the Yemeni press is far freer than many in the region, including Egypt’s, it is embattled. The government’s assault on the media has intensified as Yemen’s relationship with the United States has grown closer since
September 11, 2001.

The Obama administration has more than doubled military aid, from $67 million in 2009 to $150 million in 2010. WikiLeaks cables show that U.S. aid has been directed to the fight against the regime’s domestic opponents, particularly the Houthi rebels in the north, with the knowledge of CentCom commander Gen. David Petraeus and, thus, all the major players in Washington.

Divergent Groups The Yemeni opposition is composed of several groups, some of which are coherent and others only loose formations, and which compete with each other and (importantly) within their own ranks as often as they cooperate.

Notable are the armed groups. In the northern province of Saada, on the border with Saudi Arabia, the rebellion led by members of the Houthi family has entered into its sixth ceasefire in only seven years, with considerable loss of civilian life caused by government attacks on displaced persons camps. In the South, what began in 2007 as a peaceful protest movement calling for a more equitable distribution of state resources and political power was repressed so forcefully that some of its members have started to shoot back.

Then there is al-Qaeda in the Arabian Peninsula, a franchise of unknown size that is nesting in Yemen’s more remote regions, where the state’s writ is shaky at best. Complicating the picture is the Salih regime’s relationship to radical Islamist militants. While formally committed to Washington’s counter-terrorism operations, Salih has maintained close ties to conservative cleric ‘Abd al-Majid al-Zindani and his fellows, who encourage vigilante violence and are accused of helping to recruit and indoctrinate militants.

The current round of civil protests, however, is led by none of these groups. The JMP coalition’s efforts to construct itself as a “loyal opposition” are clearly distinct from the rhetoric of open revolt elsewhere in Yemen, and bear little resemblance to the diffuse, bottom-up movement in Egypt.

JMP protests in Sanaa resemble opposition rallies, with distinguished speakers enumerating demands to cheering, chanting crowds in color-coordinated costume. Even the hue of pink, the “color of love,” was chosen to highlight the civil, warm-hearted nature of the protests. The opposition’s demands, however, are substantive, and display little tenderness for the Salih regime.

The JMP, as an umbrella for Islamist, Socialist, Nasserist and other smaller parties, has been in existence since 2002. It reached the apex of its political power when it fielded a consensus candidate to run against Salih in the 2006 presidential election. While the JMP’s man, Faysal bin Shamlan, won only 23 percent of the vote, he is credited with making Salih promise a number of reforms that he would otherwise have held in reserve.

But since 2006 the JMP has been torn apart by divisions over ideology and strategy. The cleavages were thrown into sharp relief by the unanticipated rise of al-Harak, the Southern secessionist movement, whose platform overlaps with the JMP’s. Some JMP leaders have tried to capitalize on the popularity of al-Harak, but others fear the costs of being associated with a cause that speaks of secession.

The JMP, even as protests continue, remains preoccupied with the “court politics” of the capital and struggles to articulate demands that can span the ideological stretch of its member parties. This difficulty has meant each group has abandoned significant objectives, with the risk that core supporter will be alienated. But everyone agrees on increased transparency, accountability, reduced corruption and a bigger voice for Yemenis across the political spectrum. Primary among these demands is genuine electoral reform, particularly proportional representation to blunt the force of the ruling party.

The government has oscillated between guarded tolerance and suppression of the protests. In a move from Mubarak’s playbook, it has reportedly deployed plainclothes police and hired thugs to harass peaceful protesters, especially women, in an effort to provoke a response that would justify retaliation with brute force. In another echo of Egyptian events, the government has staged counter-protests in support of the regime and called out the armed forces to contain any clash that might just happen to erupt between the regime backers and the JMP.

Salih’s Feb. 2 promises are unlikely to convince anyone. Before the 2006 presidential campaign, for example, he vowed not to run, so that Yemen could be governed by “young blood.” But as the election approached, he made an elaborate show of bowing to a popular will that, supposedly, demanded his return to the presidential palace.

When Salih announced that he would not run again and would not pass the presidency on to his son, he was answering the calls of protests in Cairo against Hosni Mubarak and family. Salih is trying to link Cairo and Sanaa in the minds of Western policymakers, so that they will fear the spread of chaos and endorse the status quo.

As the headlines fade, Salih could dig in, refusing to yield to protesters’ more substantive demands, and continuing to govern through managed chaos, leveraging the crisis for more foreign aid. With U.S. and Saudi military assistance at an all-time high, Salih’s ability to monitor and suppress the opposition, and then use his large parliamentary majority to further consolidate his power, cannot be dismissed.

Stacey Philbrick Yadav is assistant professor of political science at Hobart and William Smith Colleges. This is excerpted from merip.org.