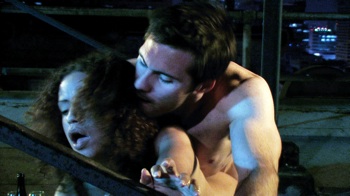 Now & Later’s claim to distinction lies in its exceptionally, unabashedly explicit sex scenes, which, according to writer/producer/director Philippe Diaz, constitute an activist intervention “to bring sex back in entertainment as a natural part of life as much as politics and philosophy.”

The film’s slight narrative premise is based on a chance encounter between Bill (James Wortham), a former banker facing a jail sentence for unauthorized transactions he conducted in the trade of Argentinean national debt, and Angela (Shari Solanis), a charitable, footloose and lusty Latin beauty. During the revealing few days he spends hiding out in the comfort zone of her East Los Angeles squatter’s loft, she becomes his impromptu lover and life coach. He calls her “Now” for her living in the present moment, and she nicknames him “Later” for his pondering the future.

Their liaison comprises an unlikely reversal of roles: she is an illegal immigrant, but moves around freely, while he has become an outsider in his own country, wanted by the law. Angela productively and generously interacts with the local community through her waitressing job at a neighborhood restaurant and her volunteer work at a clinic, while Bill has swapped one position of dysfunctional confinement for another. She left her childhood behind in Nicaragua when her parents were killed by the Contras, while he plans to escape there after jumping bail.

If all this sounds a tad schematic, the self-conscious teacher-student relationship that unfolds between the leads proves almost insufferably contrived. Bill represents the ignorant American capitalist, whose misguided priorities are drastically reshuffled by the wisdom Angela imparts to him — “if possessions were important, only rich people would be happy,” she muses — and the carnal pleasure she nudges him to shamelessly enjoy with her. When she asks him if he masturbates, he disparages it as a childish act, but the film finds respite and redemption in the adolescent limbo its man-child protagonist comes to inhabit.

Now & Later dresses the template of a coming-of-age story down to a pocket-size Idiot’s Guide to Life. Bill appears baffled and clueless as Angela sums up the U.S. government’s history of dirty dealings (Lumumba, Allende, Irangate…), awkward and bashful as she insists he “stop thinking and start feeling” by letting the wind blow over his naked body on the roof of her building and impish as she offers to put on a show for his gratification. Diaz attributes a restorative power to his hero’s envelopment in the experience of unencumbered desire, but fails to acknowledge the inherent falsity of Bill’s “emancipation,” namely that it keeps him living in a bubble, albeit a lower-end one than he is used to.

Rather than Wilhelm Reich’s insight that “a sexually repressed society will resort to violence,” which serves as an epigraph to the narrative, the filmmaker should have heeded Georges Bataille’s somewhat more nuanced assessment of coitus as the parody of crime. Bill’s status as a criminal and the clandestine circumstances of his stay at Angela’s are not incidental, but crucial to their intercourse, yet Now & Later glosses over this aspect of his awakening in an oddly, disingenuously naïve way. No matter how profoundly liberating the expression of sexuality can be, it does not constitute a natural act that is devoid of ideological investment.

In the cinema’s scopophilic realm, ideology translates first and foremost as voyeurism — the displacement of violence onto the passive-aggressive regime of the gaze. Despite Diaz’s statement to the contrary, the fact that his “camera always stays at the level of the characters” fails to neutralize this voyeuristic impetus and privileges the perspective of Bill, who plays the consummate yet passive observer. When Angela asks whether he enjoys looking at himself in the mirrors behind the bed during their first entanglement, or lets him watch her masturbate and shower in the morning, he cuts a humorless and self-absorbed figure. His sudden presence in the waiting room of the clinic where she volunteers betrays an utter disconnect from other people and matches the film’s overall depiction of society as a universe at odds with the pacifying glow of Angela’s apartment and rooftop refuge.

Not by coincidence, it takes a sole incursion from the outside world to bring a whiff of dramatic tension to the story, as Diego (Adrian Quinonez), a reporter and sporadic lover of Angela’s, stops by for a visit between faraway assignments. Intimations of a ménage-à-trois surface, sexual and gender roles assume a more multi-faceted dimension, and Now & Later seems momentarily to take its cue from the luscious minimalism of Chantal Akerman’s 1991 Night and Day.

Left to their own devices, though, Angela and Bill are never fleshed out beyond Diaz’s didactic abstractions. For all their exposure, this puritanical American cipher and idealized nurturing Other make very few sparks fly.