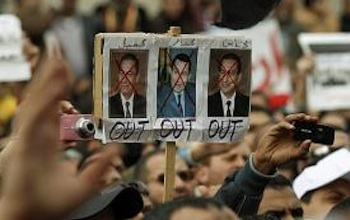 Pro-democracy protesters are continuing their sit-in in Cairo’s Tahrir (Liberation) Square for the fourteenth consecutive day, showing no signs of being appeased by talks held a day earlier between the government and opposition groups.

People seeking President Hosni Mubarak’s immediate ouster were still camped out in the square on Monday while life was slowly getting back to normal in other parts of the Egyptian capital following a fortnight of turmoil.

A symbolic funeral procession was also held in the square for a journalist killed by a sniper during the unrest. The procession was led by the journalist’s wife and daughter. UN says at least 300 people were killed in the violence during the period.

An Al Jazeera correspondent said traffic in the streets was increasing while businesses were beginning to reopen.

“There’s a lot of popular public sentiments in Cairo and wider Egypt regarding what those protesters are trying to achieve but at the same time, people are trying to get back to live as normal lives as possible,” he said.

“But some of the shopping malls for example are still closed because they’re afraid of looting, and the banks yesterday were only open for a few hours.”

Tanks continue to guard government buildings, embassies and other important institutions in the city.

Meanwhile, an Al Jazeera online producer, reporting from the square, said relations between the protesters and the troops had been turning tense.

On Sunday night, troops stationed near the famed Egypt Museum had briefly opened fire. Tensions also rose when soldiers attempted to reinforce a barbed wire fence, which the protesters resisted. Agitated protesters staged a sit-in and two of them were detained.

Egypt has been in upheaval since January 25, when protesters took to the streets seeking Mubarak’s immediate resignation.

Omar Suleiman, the country’s newly appointed vice-president, began meetings with six opposition groups on Sunday, including the banned Muslim Brotherhood (MB), in an attempt to end the crisis.

But Salma El-Tarzi, an activist in Tahrir Square, told Al Jazeera that she was indifferent to the talks.

“The political parties can do whatever they please because they don’t represent us,” she said.

“This is not a revolution made by the parties. The parties have been there for 30 years and they’ve done nothing. This is the people’s revolution.”

Some analysts have called the Muslim Brotherhood’s participation in the dialogue a major concession. The group had initially refused to participate in any negotiations unless Mubarak resigns.

But Essam El-Erian, a member of the MB, Egypt’s largest opposition group, told Al Jazeera that it has to participate “in any dialogue that can meet the demands of the people”.

“This process can encourage more people to be added to protesters in Tahrir Square and all over the country. We’ve gone to the dialogue to enforce the revolution … to add more pressure on Mubarak and his regime to leave.”

However, another member of the movement played down the meeting, saying the MB is not prepared to drop its central demand of calling for Mubarak to resign as president.

“We cannot call it talks or negotiations. The Muslim Brotherhood went with a key condition that cannot be abandoned … that he [Mubarak] needs to step down in order to usher in a democratic phase,” Abdul Moneim Aboul Fotouh told Al Jazeera.

According to a statement from Suleiman’s office following the meeting, the government offered to form a committee to examine proposed constitutional amendments, pursue allegedly corrupt government officials, “liberalise” media and communications and lift the state of emergency in the country when the security situation was deemed to be appropriate.

But Fotouh said the government had failed to take concrete measures on the ground.

“If they were serious, the parliament would have been dissolved, also a presidential decree ending the emergency law”.

Egypt has been under emergency rule since 1981, the year Mubarak assumed power.

The political parties can do whatever they please because they don’t represent us. This is not a revolution made by the parties. The parties have been there for 30 years and they’ve done nothing. This is the people’s revolution.

Barack Obama, the US president, made new remarks on the political situation in Egypt after the meeting. He told the US television network Fox that Egyptians would not permit a repressive government to fill the Mubarak void, adding that the Muslim Brotherhood is only one faction in Egypt.

“So it’s important for us not to say that our own only two options are either the Muslim Brotherhood or a suppressed people.”

Our correspondent in Cairo said the pro-democracy protesters were still not pleased with Obama’s stance on the crisis.

“Protesters tell me Obama still hasn’t come up with any statement that they want to hear,” he said.

“They want immediate change and the feeling among many of them is that the way US is handling this crisis is not good for the way America is perceived both here and in general in the wider region.”