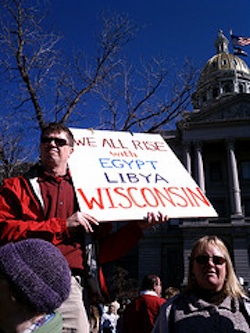 On one weekend in February of 2003, an estimated 10 million people in 60 countries took to the streets to protest the looming Iraq war. Never before in history had there been such massive, public opposition to a war before it began. But the war began anyway and the people — their numbers misreported in much of the media by a factor of ten, their opposition seemingly irrelevant — went away.

Are they back now?

None of the world-shaking protests of recent weeks — in Tunisia and Egypt, in Libya, Bahrain, Iran, in Wisconsin and around the U.S. — ostensibly have anything to do with the wars on this planet, except the ones that governments, including those in various state capitals, are waging against select segments of their own populations. What makes the current protests different from the protests that briefly flickered around the globe eight years ago is that they aren’t really protests anymore. They’re acts of self-defense. And that’s the link between Cairo and Madison.

But I think there is a link, as well, between the protests of today and the fiercely futile antiwar demonstrations of eight years ago. Both are a flaring forth of raw democracy on behalf of human rights and human dignity. The war machine has hurtled along essentially unchecked, wrecking nations and ecosystems, shattering the lives of millions and, in its extraordinary waste of national treasure, adding trillions of dollars to the U.S. national debt and contributing to our economic collapse.

By 2006, economists such as Joseph Stiglitz and Linda Bilmes were sounding a warning of the devastating economic consequences that the war on terror would have on our future, crippling us with obligations — such as lifelong care for brain-injured vets — almost too disturbing to calculate. No one in power gave evidence of listening then, and they’re still not listening. But bankrupt state governments — struggling not only with their own tattered economies but also the diminished flow of federal funds to help them maintain services and infrastructure — have begun implementing ever more draconian austerity measures, including, as the swelling crowds in Madison have taken a stand against, public-sector union busting.

Ordinary men and women would suffer not just economically. They would lose their voices in the public realm — and this, finally, is the self-interest motivation that has begun to drive Americans to take to the streets again, to reclaim their democracy and demand social change. Self-interest, married to a vision of justice and fairness, fueled the great social movements of the 1960s and ’70s: civil rights, women’s rights and, because of the draft, opposition to the Vietnam War.

The vision alone is not enough. It didn’t sustain the antiwar protests of 2003 much beyond the onset of shock-and-awe bombing. But eight years later, the Bush-Obama wars, which, in tandem with corporate deregulation and the transfer of wealth upward that began in the Reagan years, have thrown the economy into a tailspin; and the subsequent economic pain felt by more and more people has brought self-interest back into play. This could be the start of something big . . . and, so I urgently hope, trans-national.

“Altogether, it may not be hyperbolic to say that Wisconsin’s fate is the country’s fate,” David Michael Green wrote this week at Common Dreams. “If the thieves win, it will empower and encourage thieves nationally. If the people win, that victory may produce a Tunisia effect, getting folks to realize, as Egyptians did, that you’re really only captive to the power of thugs for precisely as long as you believe yourself to be captive to the power of thugs.”

What’s crucial is that the social vision must remain part of this struggle. We can’t let it degenerate into merely a game of strategy and tactics, of limited objectives and winning and losing. The social vision must continue to grow in its humanity and cry for universal justice as the “Tunisia effect” spreads from state to state. Our sense of self-interest must expand and learn to embrace a world that works for everybody.

And the wars we are fighting, with the silent suffering they inflict, with their consequences largely hidden from most of us, must become a central focus of the growing movement for change.

As Robert Greenwald noted recently on Huffington Post, for instance, Wisconsin Gov. Scott Walker’s plan to solve his state’s “budget crisis” by cutting wages and benefits for most public employees — and, by the way, curtailing their collective-bargaining rights — would save a paltry $150 million annually. Since it costs about $1 million a year to maintain one soldier in Afghanistan, bringing 151 of them home per year — and making that money available to the states — would be more fiscally effective.

Considering that the Afghanistan War is going to cost Wisconsin taxpayers more than $1.7 billion in 2011, Greenwald wrote, “an end to the war would free up more than ten times his plan’s cash, which the president could use for state fiscal aid.”

This of course is laughably not an option within today’s two-party status quo. The current system serves the war god without question. Peace will only prevail when there is a demand for it from outside the system — a Tunisia effect of vision and self-interest — so insistent it won’t take no for an answer, or go away quietly.