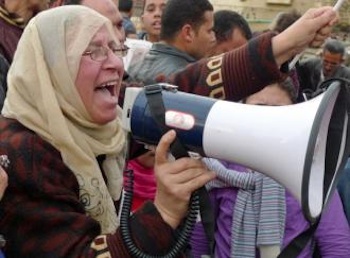 The Russian revolutionary Lenin wrote that for a revolution to occur, it’s necessary both that the lower classes refuse to endure their situation any longer, but also that the upper classes are unable to rule in the old way.

In Egypt, masses of people have shown that they will no longer endure the conditions they have put up with under Mubarak–the police-state repression, the stifling of dissent, the neoliberal economic measures that have consigned half the population to living on $2 a day.

But with his speech on Thursday, Hosni Mubarak made it clear that he didn’t want to not rule in the old way, no matter what the consequences.

It was one of the strangest days of the revolution so far, and we probably won’t know for a long time what was going on behind the scenes. The day started out with the military sending the message to protesters that “all your demands will be met” and, in Washington, CIA chief Leon Panetta testifying in Congress that Mubarak would be gone by the end of the day. And it ended with Mubarak saying he wasn’t going anywhere.

Thinking back about the great revolutions of the past, one is reminded of the writings of Karl Marx in 1848, in which he describes the revolutionary wave that swept across Europe that year. He described those revolutions as having a mass popular content, both in terms of participation, but also their profoundly democratic aspect. They raised demands for the right of assembly and free association, the free expression of ideas, freedom of religion–all questions that are present in Egypt today.

This aspect of the 1848 revolutions led Marx to begin to think about the way that a future working class revolution would be the essence of any true struggle for liberation. Marx spoke at the time about socialists being the most extreme democrats–extreme not only in the sense that we carry the battle through to the end, but that we stand for a program and a goal of the complete liberation of all humanity, based on the working class struggle.

Clearly, we aren’t to that point in Egypt, but it’s important to understand how far we’ve come. This is a country that has been ruled by a dictatorship for 30 years, with arrests, detentions and torture a constant occurrence. And now an uprising of two-and-a-half weeks thusfar has spread to every part of the country and completely transformed Egyptian society.

Most of the attention has been devoted to the struggle around Tahrir Square–this is the symbol of revolution. But in the past few days, groups of workers have taken strike action. I noticed in newspaper reports that the Health Ministry workers I’d seen picketing two weeks ago are now formally part of the Tahrir demonstrations–since the demonstrators have now moved to the parliament building, which is right across from the Health Ministry.

So even with the mass mobilization at Tahrir being maintained, there has been an enormous spread of the revolution, with larger and larger waves of people becoming involved in the struggle in a way that’s astounding to behold.

The process hasn’t just moved in one direction. The last two weeks have been a see-saw back and forth–with the situation favoring the government on some days, and then the momentum swinging back in favor of the movement on others.

When I came home from Egypt on Tuesday, the headline of Britain’s Independent newspaper was “Will the revolution wane?”–the article was illustrated with a picture from the day before with Tahrir Square almost empty, and one from the previous week when it was packed. Little did the Independent know that the day they published that story, every major media outlet concluded that the mobilizations were bigger than anything that came before.

The swings back and forth have been extreme. For example, a week ago Wednesday and Thursday, on February 2 and 3, Mubarak’s regime unleashed its baltagi–an Arabic word for thug that deserves to be introduced into the English language. After the attacks on the square, nobody was certain whether the movement would reappear in strength.

But it did. In large part, this was because public opinion swung very sharply in favor of the demonstrators. On Friday, February 4, among the people who came to Tahrir Square in their thousands and thousands were many who weren’t previously committed to the democracy movement or the overthrow of Mubarak, but who came to show their support for the victims of the baltagi.

People came bringing medical help and supplies and food. This was another stage of the process–it became seen as the duty of any proud Egyptian to support the demonstrators.

That raises another subject that hasn’t been commented on much in the media, but that is present for anyone in Egypt. We’re talking about a society where the feeling of any kind of pride in being an Arab or an Egyptian is something that was lost a very long time ago. It was crushed out of people as a result of the peace with Israel on the one hand, neoliberalism on the other hand, the servile relationship of the Mubarak regime to the U.S. on a third.

So this is one of the most spectacular aspects of what’s happened in Egypt, as in Tunisia and as in democratic revolutions historically–the return of a sense of pride. This also comes, remember, after September 11 and the war on terror, which brought with it the demonization of Arabs and Muslims around the world.

You can see just in the way people comport themselves that people have new expectations for their future. So that’s to underline, if not fully explain, some of the dynamic elements that aren’t so clearly evident from the outside, but continue to drive this struggle to new heights.

Now the revolution is faced with a new challenge following Mubarak’s speech, and people have been further transformed by the experience. Obviously, no one had any illusions about Mubarak staying on as president, but now Mubarak’s vice president Omar Suleiman has become more and more exposed for what he represents.

It was a factor that was already at work last weekend, when Suleiman organized talks with select figures in the opposition. So you have the government offering negotiations, but the chief negotiator is the chief assassin of the Mubarak regime. Everyone knows they’re negotiating with the head of military intelligence who must have ordered the torture or killing of thousands of people.

So there are consequences for those forces in the opposition that agree to talks under those circumstances. For example, I read a report on Wednesday that in the town of Suez, the negotiations with Suleiman produced mass resignations from three parties who were involved–the Tagammu, the Wafd and the Nasserists.

According to the Daily News Egypt, those who resigned met with members of the Muslim Brotherhood and others to “set up a coalition named ‘The Council to Protect the Revolution’ in Al-Arish, which is mandated to support the demands of the protesters.”

That’s just one of the incidents in this unfolding situation, which is very exciting, but which has very real dangers. At the end of the day the problem of power remains–how the masses of people can exercise power, and how they can defend themselves against power, including the power of the security forces and the army. That’s the specter that Suleiman and Mubarak both raised in their speeches on Thursday, and it immediately raises the question of the defense of the revolution.

Ahmed Shawki  is an editor at the International Socialist Review.