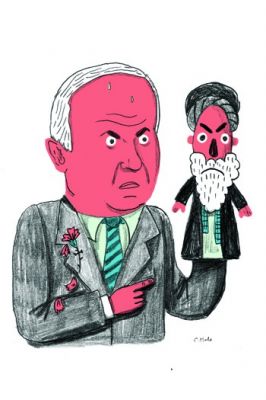 In Israel’s view the Tunisian and Egyptian revolutions are bad, very bad. Educated Arabs, not all dressed as “Islamists,” quite a few speaking perfect English, whose wish for democracy is articulated without resorting to anti-Western rhetoric, are bad for Israel.

Arab armies that do not shoot at these demonstrators are just as bad. The world reaction is also bad. It makes the Israeli occupation in the West Bank and the Gaza Strip and its Apartheid policies inside the pre-1967 border look like the acts of a typical “Arab” regime.

For a while you could not tell what official Israel thinks. In his first-ever common-sense statement, Prime Minister Netanyahu asked his ministers, generals and politicians not to comment publicly on the events in Egypt. For a brief moment you thought that Israel turned from the neighborhood thug to what it always was: a visitor or permanent resident.

But Netanyahu could not keep his mouth shut for long. Perhaps he was embarrassed by his new chief of Military Intelligence. On Jan. 25, the same day protests began in Egypt, Gen. Aviv Kochavi told the Knesset that the Mubarak regime was as solid and resilient as ever. Netanyahu predicted Egypt could “go the way of Iran … where calls for progress will be silenced by a dark and violent despotism.” And when the boss talked, others followed: Israel is facing “a hostile situation” with “Turkey and Iran … on the way up”; “Israel has been ousted from the Middle East”; “the greatest danger … is Hamas and Jihad.” They made Fox News’ commentators look like peace-loving hippies.

The Israeli narrative is simple. This is an Iranian-like revolution helped by Al Jazeera and stupidly allowed by a new Jimmy Carter. Spearheading this interpretation are the former Israeli ambassadors to Egypt. All their frustration from being locked in an apartment hall in a Cairean high rise is now erupting like a volcano. Their tirade is summed up in the words of one: “this is bad for the Jews, very bad.” In Israel of course when you say bad for the Jews, you mean the Israelis — but you also mean that whatever is bad for Israel is bad for the Jews all around the world (despite the evidence to the contrary since the founding of the Jewish State).

What is really bad for Israel is the comparison with the Arab revolutions, which exposes the fallacies and pretense of the Jewish state like never before. Egypt’s minister of Interior, who directed his thugs to attack demonstrators, will probably be brought to justice. Compare him to Yair Naveh, a candidate for the Chief of the General Staff in Israel. In 2008 he ordered troops to kill Palestinian suspects even if they could be peacefully arrested. He is not going to jail, but the Israeli soldier, Anat Kam, who exposed those orders, is now facing nine years in jail for leaking them to Ha’aretz. The light radiating from Egypt is so strong that it also illuminates the darker spaces of the “only democracy” in the Middle East.

Nonviolent, democratic Arabs (religious or not) are bad for Israel. But maybe these Arabs were there all the time, not only in Egypt, but also in Palestine. The insistence of Israeli commentators that the most important issue at stake is Israel’s peace treaty with Egypt is a diversion. What is at stake is the pretense that Israel is a stable, civilized Western island in a rough sea of Asiatic barbarism and Arab fanaticism. The danger is that the cartography would be the same but the geography would change. It would still be an island, but of barbarism and fanaticism in a sea of newly formed democratic states.

In the eyes of civil society in the West the image of Israeli democracy vanished some time ago; it may now be tarnished in the eyes of those in power. Nonetheless, the cry rising from Midan al-Tahrir is a warning that the fake mythologies of the only democracy, hardcore Christian fundamentalism (far more sinister and corrupt than that of the Muslim Brotherhood), military-industrial profiteering, neo-conservatism and ruthless lobbying cannot always guarantee the special relationship between Israel and the United States.

The diametrically opposed cases of the anti-U.S. regional powers of Iran and Syria, and to some extent Turkey, on the one hand, and the fallen pro-U.S. tyrant of Mubarak on the other, indicate that even if the special relationship is sustained, U.S. support may not be enough to maintain an ethnic and racist Jewish state in the heart of a changing Arab world.

This could have been good news for the Jews, even for the Jews in Israel. To be surrounded by peoples who cherish freedom, social justice and spirituality, and navigating sometimes safely and sometime roughly between tradition and modernity, nationalism and humanity, aggressive capitalist globalization and daily survival, is not going to be easy. But the democratic impulse carries hope of replacing more than a century of Zionist colonization and dispossession with a more equitable reconciliation with its Palestinian victims.

Trust the Israelis not to miss an opportunity to miss peace, however. They would cry wolf; they would demand, and receive, more funds from American taxpayers due to the “developments”; they would try to undermine any transition to democracy (remember the viciousness of their reaction to democratization in Palestinian society); and they would elevate Islamophobia to new heights.

Who knows? Maybe the American taxpayer would not budge this time and European politicians would heed the public sentiment and not only Egypt would end its autocratic regime — but so would Israel. It then would have a chance of being part of the changing real Middle East, and not the one it imagined and invented 60 years ago.

Ilan Pappé is Director of the European Center for Palestine Studies in the Institute of Arab and Islamic Studies at the University of Exeter and is co-author with Noam Chomsky of Gaza in Crisis: Reflections on Israel’s War Against the Palestinians (Haymarket Books, 2010).