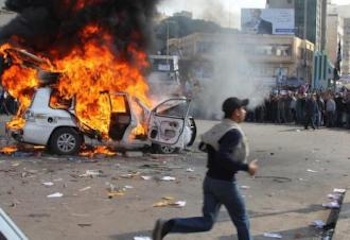 The Qaddafi regime is prepared to fight to the last drop of blood to crush the revolution. This isn’t new. He and his Free Officer allies have always hammered opposition with ruthless efficiency–the public execution has been a centerpiece of the regime’s repertoire since serious challenges first emerged in the 1980s.

What is new is the level of escalation demanded of the dictatorship. When they couldn’t rely on the police and army to crush the protesters, they turned to mercenaries to butcher them in their hundreds. The massacres have continued, just enough to keep the regime entrenched in the capital, even as large swathes of Libya are declared liberated. To deal with those liberated and nearly-liberated populations, the regime ordered the army to carry out air strikes.

The divisions in the state have been sufficient to send soldiers and police to the protesters’ side, and a number of soldiers who refused to carry out air strikes have taken their planes to Malta and sought refuge. The army has abandoned the border, leaving it to the control of People’s Committees.

Benghazi, where the regime had been totally defeated and sent packing, was set to be the target of vengeful air strikes on February 21–except that two of the planes ordered to attack reportedly landed in the city, the pilots refusing to drop their payload. The city has been declared safe for now. Even at the Libyan embassy in London, staff joined anti-Qaddafi protests.

The surreal atmosphere in the presidential palace is communicated in dispatches from defecting officers. “I am the one who created Libya,” Qaddafi reportedly said, “and I will be the one to destroy it.” On February 20, one of Qaddafi’s thuggish sons–an alumnus of the London School of Economics, as well as a close friend of Prince Andrew and Lord Mandelson–threatened civil war if people didn’t go home and stop protesting.

They’ve cut off the Internet and the landlines–and banned foreign journalists–in order to be able to carry out massacres under the cover of secrecy. This is a catastrophic lashing out by a regime in mortal freefall. It is seeking, in effect, a blood tribute in compensation for its lost authority.

Even at this late hour, it would be foolish to underestimate Qaddafi ‘s ability to just hang on, to clench Libya in a rigor mortis grip. As crazed as he manifestly is, he has demonstrated considerable shrewdness in his time.

For example, as soon as the Islamist opposition started to become a real threat to his regime in the late 1990s, he started to look for ways to be accepted by the U.S.-led caste of “good guys.” The collapse of the USSR as a supplier of military hardware, trade, and ideological and moral leadership for Third Worldist states would also have had something to do with this.

The transition was made easier after 2001, and completed in 2004, partially at the behest of Anglo-American oil. Qaddafi went so far in his attempts to win over his erstwhile opponents as to participate in anti-Islamist counterinsurgency operations in the Philippines with international support, lavish intelligence on U.S. agencies and even compensate the victims of Lockerbie for a crime that Libya had not committed.

The Bush administration might still have resisted such serenading were it not for the eager rush of European capital into Tripoli. So, Bush and Blair turned it into a story of Qaddafi seeing the light and giving up his non-existent WMD programs, which charade Qaddafi duly participated in.

This whole sequence of events was bizarre and improbable, but it worked: the subsequent oil contracts, amid a global oil price spike produced by Bush’s wars, made him and his regime very wealthy. He was also able to hang opponents in public under the pretext of a fight against ‘radical Islamists’. Joining the camp of American client dictatorships enabled Qaddafi to survive until this moment.

It has also ensured that the big guns are on his side now that he faces this potentially fatal challenge to his regime. Because the trouble for the U.S. and UK governments in this revolt is that they really, really don’t want Qaddafi to fall. Qaddafi is someone with whom they can do business.

By contrast, the National Front for the Salvation of Libya, long a leading element in the resistance, is less likely to be so pliable. The U.S. and UK invested too much in Qaddafi to lose him now, not least the military hardware they’ve given him, the very weapons of repression which they knew full well would be used for the primary goal of keeping him in power.

That is why the phrases on the lips of U.S. and European ambassadors and statespersons are so mealy-mouthed. Hillary Clinton’s berating of Libya’s government for “unacceptable” levels of violence has approximately the same passion and conviction as a school marm telling off a child for running with scissors.

These people–the caretakers, intellectuals, politicos and lackeys of empire–have spent more than two decades telling us that they were outraged by every drop of blood spilled by dictatorships, that they were if anything overly eager in their solicitations for democracy and human rights, messianic to a fault. This never had a moment’s plausibility, but it has never looked as vile and sinister as it does now, amid a genuinely heroic revolutionary democratic struggle.

Richard Seymour, is the author of The Liberal Defence of Murder and a blogger at Lenin’s Tomb.