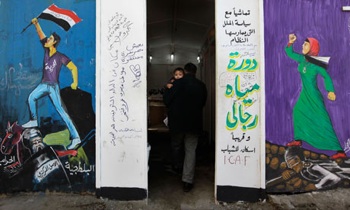 The refusal of the people to kiss or ignore the rod that has chastised them for so many decades has opened a new chapter in the history of the Arab nation. The absurd, if much vaunted, neocon notion that Arabs or Muslims were hostile to democracy has disappeared like parchment in fire.

Those who promoted such ideas appear to the most unhappy: Israel and its lobbyists in Euro-America; the arms industry, hurriedly trying to sell as much while it can (the British prime minister acting as a merchant of death at the Abu Dhabi arms fair); and the beleaguered rulers of Saudi Arabia, wondering whether the disease will spread to their tyrannical kingdom. Until now they have provided refuge to many a despot, but when the time comes where will the royal family seek refuge? They must be aware that their patrons will dump them without ceremony and claim they always favoured democracy.

If there is a comparison to be made with Europe it is 1848, when the revolutionary upheavals left only Britain and Spain untouched – even though Queen Victoria, thinking of the Chartists, feared otherwise. Writing to her besieged nephew on the Belgian throne, she expressing sympathy but wondered whether “we will all be slain in our beds”. Uneasy lies the head that wears a crown or bejewelled headgear, and has billions stored in foreign banks.

Like Europeans in 1848 the Arab people are fighting against foreign domination (82% of Egyptians, a recent opinion poll revealed, have a “negative view of the US”); against the violation of their democratic rights; against an elite blinded by its own illegitimate wealth – and in favour of economic justice. This is different from the first wave of Arab nationalism, which was concerned principally with driving the remnants of the British empire out of the region. The Egyptians under Nasser nationalised the Suez canal and were invaded by Britain, France and Israel – but that was without Washington’s permission, and the three were thus compelled to withdraw.

Cairo was triumphant. The pro-British monarchy was toppled by the 1958 revolution in Iraq, radicals took power in Damascus, a senior Saudi prince attempted a palace coup and fled to Cairo when it failed, armed struggles erupted in Yemen and Oman, and there was much talk of an Arab nation with three concurrent capitals. One side effect was an eccentric coup in Libya that brought a young, semi-literate officer, Muammar Gaddafi, to power. His Saudi enemies have always insisted that the coup was masterminded by British intelligence, just like the one that propelled Idi Amin to power in Uganda. Gaddafi’s professed nationalism, modernism and radicalism were all for show, like his ghosted science-fiction short stories.

It never extended to his own people. Despite the oil wealth he refused to educate Libyans, or provide them with a health service or subsidised housing, squandering money on absurdist projects abroad – one of which was to divert a British plane carrying socialist and communist Sudanese oppositionists and handing them over to fellow dictator Gaafar Nimeiry in Sudan to be hanged, thus wrecking the possibility of any radical change in that country, with dire consequences, as we witness every day. At home he maintained a rigid tribal structure, thinking he could divide and buy tribes to stay in power. But no longer.

Israel’s 1967 lightning war and victory sounded the death knell of Arab nationalism. Internecine conflicts in Syria and Iraq led to the victory of rightwing Ba’athists blessed by Washington. After Nasser’s death and his successor Saadat’s pyrrhic victory against Israel in 1973, Egypt’s military elite decided to cut its losses, accepted annual billion-dollar subsidies from the US and do a deal with Tel Aviv. In return its dictator was honoured as a statesman by Euro-America, as was Saddam Hussein for a long time. If only they had left him to be removed by his people instead of by an ugly and destructive war and occupation, over a million dead and 5 million orphaned children.

The Arab revolutions, triggered by the economic crisis, have mobilised mass movements, but not every aspect of life has been called into question. Social, political and religious rights are becoming the subject of fierce controversy in Tunisia, but not elsewhere yet. No new political parties have emerged, an indication that the electoral battles to come will be contests between Arab liberalism and conservatism in the shape of the Muslim Brotherhood, modelling itself on Islamists in power in Turkey and Indonesia, and ensconced in the embrace of the US.

American hegemony in the region has been dented but not destroyed. The post-despot regimes are likely to be more independent, with a democratic system that is fresh and subversive and, hopefully, new constitutions enshrining social and political needs. But the military in Egypt and Tunisia will ensure nothing rash happens. The big worry for Euro-America is Bahrain. If its rulers are removed it will be difficult to prevent a democratic upheaval in Saudi Arabia. Can Washington afford to let that happen? Or will it deploy armed force to keep the Wahhabikleptocrats in power?

A few decades ago the great Iraqi poet Mudhafar al-Nawab, angered by a gathering of despots described as an Arab Summit, lost his cool:

Fax the news to the UN.

Camp after Camp and David,

Father of all your Camps.

The stench of your bodies floods your nostrils …

May your faces be blackened;

That your faces resemble both …

Farts with a tune

Let the Summit be

Let the Summit not be

I spit on each and every one of you

Whatever else, Arab summits will not be the same again. The poet has been joined by the people.