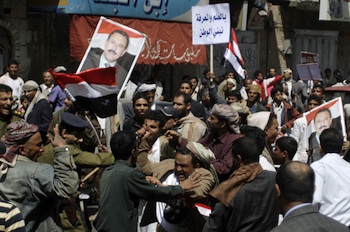 Thousands of protesters have taken to the streets in the Yemeni capital, calling on President Ali Abdullah Saleh to step down.

Clashes broke out in Sanaa between groups supporting and opposing the government after men armed with knives and sticks forced around 300 anti-government protesters to end a rally,  the Reuters news agency quoted witnesses as saying on Saturday.

Inspired by the Egyptian uprising which toppled Hosni Mubarak, protesters chanted “After Mubarak, it’s Ali’s turn” and “A Yemeni revolution after the Egyptian revolution.”

Eyeing protests elsewhere in the Middle East, Saleh, in power since 1978, last week promised to step down when his term ends in 2013. He has also promised not to pass power to his son.

His move followed sporadic anti-government protests, and the opposition has yet to respond to his call to join a unity government. The opposition wants talks to take place under Western or Gulf Arab auspices.

The group said the celebrations turned to clashes when hundreds of men armed with knives, sticks, and assault rifles attacked the protesters as security forces stood by.

Also on Friday, the separatist Southern Movement said police broke up hundreds of Yemenis celebrating in the streets of Aden, where police had been heavily deployed since morning to clamp down on planned separatist protests earlier in the day.

Around 3,000 protesters across southern Yemen protested on Friday afternoon to demand secession, though most of the protests were quickly broken up by security forces.

They discussed plans to raise salaries for civil servants and the military – a second planned wage increase since last month, when Saleh planned a raise of about $47.

“This is a quick move to try and get rid of popular anger, but Yemenis are not mad about a lack of spending on wages,” Mohamed al-Sabri, a leader of Yemen’s opposition coalition, said.

“This decision misreads the situation and is a simplification of what’s happening in Yemen.”

About 40 per cent of Yemen’s 23 million people live on less than $2 a day, while a third face chronic hunger.

Tens of thousands of demonstrators turned out on February 3 to protest against Saleh’s rule. An equal number of pro-government demonstrators also took to the streets on the same day.