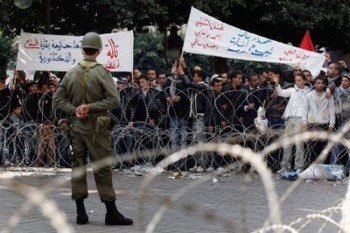 Is the crescent of North Africa’s revolutionary honeymoon already fading away? Tunisia, ground zero for the the wave of popular uprisings cascading across Egypt and the Middle East—and a political bellwether—began as a inspiring revolutionary narrative. But this week, the victory of the people’s triumph over the Ben Ali dictatorship has been eclipsed by an “exodus” lurching across the Mediterranean.

Driven by the post-revolutionary political fallout, thousands of Tunisian refugees have flocked to the small Italian island of Lampedusa, a way station between Africa and the southern lip of the European Union. Why would the people of revolutionary Tunisia be so eager to flee, and not stick around to savor the victory of toppling a much-hated dictator? As one refugee told an Italian news outlet, they just need work:

We are afraid. The revolution in January has changed nothing, absolutely nothing. We want to find a job in Europe. We are asking the Italian people for help.

Each migrant’s motives are unique; some may fear political persecution, others may simply have seized a chance to pursue longstanding dreams of escape. Whatever drove them, human rights activists are concerned for their safe passage. Their journey reminds us that the first fruits of revolution probably won’t fill material gaps or tackle the root causes of unrest.

In the background are both rational and disturbing reasons why Europe is tense about unrest spilling up from Tunisia, Egypt and other neighbors. Tunisia’s migrants are at high risk of labor exploitation, trafficking and smuggling (some have reportedly drowned), and the ugly xenophobia that has fueled the right-wing resurgence across Western Europe. Both the Tunisian military and the Italian police are gearing up to crackdown on migration flows.

Back in the Tunisian streets, the less romantic phase of rebuilding the state is off to a shaky start. Protests have continued, the economy and interim governing process are still in turmoil as opposition groups haggle over the power vaccuum left by the collapse of authoritarian rule.

But the Tunisians’ arrival in Italy, which may foreshadow major migration from neighboring countries, thrusts them into the middle of the EU’s panicked immigration policy debate.

Maroni, a member of the fiercely anti-immigrant Northern League, said earlier this week that there could be “terrorist infiltrations” among the migrants and criminals could take refuge in Europe under the guise of seeking political asylum.

Not surprisingly, however, the situation appears far less threatening to the people on the island. Al Jazeera reports:

Bernardino Rubeis, Lampedusa’s mayor, has said that the Tunisians have mostly been respectful and that the situation is under control.

“There is no security emergency because they are free to walk around the island, but they are respecting our territory, not creating any trouble,” he said.

Many of new arrivals awaited ferries on Tuesday to take them from Lampedusa to immigrant holding centres elsewhere in Sicily or on the Italian mainland.

Some EU politicians seem incapable of appreciating the gravity of predicament that Tunisians face. (Perhaps, with all the frivolity that scandalizes Italian politics these days, its useful to point to swarthy invading hordes as a diversion from domestic issues.)

The Lampedusa situation thus speaks to the challenges that both societies face: Western Europe’s economic slump makes it hard to sustain its existing workforce let alone a potential refugee surge. Tunisia is faced with the monstrous challenges of rebuilding from scratch while dealing with massive unemployment issues and the yoke of indefinite military rule.

While the U.S. scrambles flat-footedly to catch up with developments in Egypt and Tunisia (and bury memories of its historical support for oppressive regimes), the EU is being challenged to walk its talk on democracy and human rights despite austerity budgets and deep xenophobia.

Catherine Ashton, the EU’s high representative for foreign affairs and security policy, wrote in a recent commentary of Europe’s committment to building “deep democracy” by providing Egypt and Tunisia  with transitional  assistance. The pessimistic reading of this would predict that Western  powers would seek to neuter an indigenous uprising with regressive aid and trade policies. The optimistic reading is that Arab civil society will be empowered to reclaim control from the military, meet people’s basic needs, and fulfill aspirations for representative democracy.

But Tunisia’s political dynamics are mercurial. While the UGTT union federation has played a leading role in the uprising and subsequent restructuring of the government, tehre are fears that labor leaders will be compromised by collaborating with vestiges of the old establishment. (One self-described Trotskyite declared, “it is vital to fight to replace the reformist leadership of the UGTT with a class-struggle leadership dedicated to the independence of the trade unions from the bourgeoisie and its state.”)

Whether ideological factions align or the political chaos continues to bubble over, Tunisia isn’t anywhere near political equilibrium yet. The instability may be inevitable but it’s pushing out the very people for whom the revolt was waged. The desperate migrants washing up in Italy reflect how little material change has actually come to Tunisia so far.

Overturning a corrupt regime is an enormous feat, but that alone can’t uproot entrenched inequity and corruption. In the coming months, the world will see whether Tunisians can rekindle the first sparks of revolution, and redeem their rebellion with a new social foundation.