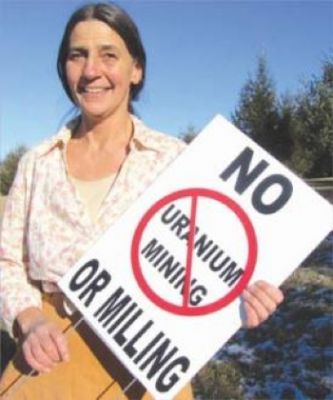 This article was originally published on CommonDreams.org from the Virginia Pilot.

VIRGINIA – The National Academy of Sciences on Monday took up the controversial issue of possible uranium mining in Virginia, with experts testifying for hours and environmentalists protesting what they say is a dangerous business idea.

The all-day hearing came less than a week after the city of Virginia Beach released a study showing that the proposed mine, some 200 miles away in Pittsylvania County, would pose risks to drinking water piped from Lake Gaston to more than 1 million residents of Hampton Roads.

“The threat to downstream communities like Virginia Beach is real,” said Cale Jaffe, a senior attorney for the Southern Environmental Law Center, based in Charlottesville.

Jaffe was among a crowd of environmentalists who trekked to Richmond to urge the National Academy of Sciences to recommend that state lawmakers keep in place a ban on uranium mining first imposed in 1982.

A company, Virginia Uranium Inc., wants the ban lifted so it can extract and process the radioactive resource buried beneath a historic farm, Coles Hill, outside the town of Chatham. The site is believed to be one of the largest uranium deposits in the world, capable of providing fuel for years to nuclear power plants.

If developed, Coles Hill would be one of only a few uranium mines ever tried east of the Mississippi River; most U.S. mines are found in arid, western states.

Critics say Virginia’s climate is too wet and could lead to flooding that might contaminate the nearby Roanoke River system, which includes Lake Gaston, with uranium wastes called tailings.

Tom Leahy, utilities director for Virginia Beach, testified Monday that most of the tailings would not make it to Lake Gaston. But as much as 20 percent would travel to Kerr Reservoir, where the toxic wastes could threaten water supplies for Norfolk, Virginia Beach and parts of Chesapeake.

“I don’t think you’d find a better place in the United States for tailings to move downstream,” Leahy told the panel.

The hearing was the fourth of seven that the National Academy of Sciences has scheduled around the country for its anticipated report on the potential costs and benefits of uranium mining in Virginia. Meetings are next planned in Colorado and Canada before wrapping up in California.

A final report from the group of scientists and atomic experts is expected in December. The document will go a long way toward deciding whether state lawmakers vote to overturn the mining ban as early as next year. Gov. Bob McDonnell, for example, has said he will wait to read the report before taking sides on the issue.

David Paylor, McDonnell’s director of the state Department of Environmental Quality, said the tailings would be overseen by the Nuclear Regulatory Commission but that Coles Mill would require various state air and water permits.

Paylor declined to say whether he favors the proposed site, only that the state “probably has sufficient resources to permit and inspect and enforce the rules at a facility like this.”

The National Academy of Sciences panel consists of 15 experts, but only one from Virginia: Peter deFur, an environmental sciences professor at Virginia Commonwealth University.