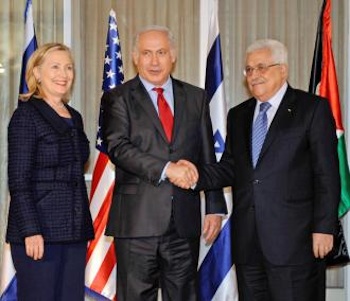 A mountain of 1,600 leaked documents chronicling years of scandalous betrayals by the Palestinian Authority offers further proof of a conclusion that requires no further proof–that the 18-year-old “peace process” between Israel and the Palestinians that was supposed to create a “viable Palestinian state” is a dead end.

The Palestine Papers, revealed to the public by Al Jazeera and the Guardian in late January, largely provide gory confirmation rather than startling new revelations–though there are a few of those–of the spinelessness of Palestinian Authority (PA) President Mahmoud Abbas and his chief negotiator Saeb Erekat.

The documents are primarily the minutes of hundreds of meetings between Palestinian, Israeli, American and sometimes Egyptian and European negotiators. They illustrate how the Palestinian side made one historic concession after another, only to be met by a single response from the Israelis: “No.”

To name just a few of these concessions, PA negotiators agreed to the division of Jerusalem’s Old City, the annexation to Israel of all but one of the settlements that Israel built in East Jerusalem, and the idea of Israel as a “Jewish state.”

PA negotiators also conceded what many consider to be the essential demand of the Palestinian national movement–the right, recognized by international law and the United Nations, of Palestinians to return to lands and homes from which they were expelled by Israel.

According to the documents, Palestinian officials agreed that Israel would allow 10,000 Palestinian refugees to return annually for 10 years, a token amount considering that several million Palestinians have lived in sprawling and poverty-stricken refugee camps across the Middle East for decades awaiting the chance to one day return to their homes and villages.

In January 2010, Erekat pleaded with U.S. State Department diplomat David Hale to acknowledge Israel’s refusal to accept the PA’s concession, saying that his negotiating team had offered Israel “the biggest Yerushalayim [the Hebrew name for Jerusalem] in Jewish history,” a “symbolic number of refugees’ return, demilitarized state…What more can I give?”

A few months earlier, Erekat tried a similar line of argument, to no avail, with George Mitchell, Barack Obama’s Middle East envoy. “Nineteen years of promises, and you haven’t made up your minds what you want to do with us,” protested Erekat. “We delivered on our road map obligations. Even Yuval Diskin [director of Israel’s internal security service] raises his hat on security. But no, they can’t even give a six-month freeze to give me a fig leaf.”

Such humiliating exchanges litter the Palestine Papers. “The overall impression that emerges from the documents, which stretch from 1999 to 2010, is of the weakness and growing desperation of PA leaders as failure to reach agreement or even halt all settlement temporarily undermines their credibility in relation to their Hamas rivals,” according to Britain’s Guardian newspaper.

“The papers also reveal the unyielding confidence of Israeli negotiators and the often dismissive attitude of U.S. politicians toward Palestinian representatives.”

For longtime defenders of the Palestinian cause, none of these betrayals by the PA will come as a shock. But for the mainstream media that largely accepted Israel’s version of events–that there was no reasonable “partner for peace” Israel could negotiate with–the Palestine Papers offer damning evidence to the contrary.

If anything, the documents confirm that Israeli officials have used the “peace process” as a way to stall for time while they continued with the project of colonization of Palestinian land. Foreign Minister Tzipi Livni, for example, openly acknowledged this at a meeting in West Jerusalem in November 2007.

According to the Guardian, Livni told Palestinian negotiator Ahmed Qureia that “she believed Palestinians saw settlement building as meaning ‘Israel takes more land [so] that the Palestinian state will be impossible’; that ‘the Israel policy is to take more and more land, day after day, and that at the end of the day, we’ll say that is impossible, we already have the land, and we cannot create the state.’ She conceded that it had been ‘the policy of the government for a really long time.'”

What’s so striking is not so much the nature of the concessions, it’s that year after year, they’re pursuing the same strategy, which not only shows itself to have failed, but showed itself to be on a slope of constant Palestinian slippage.

They knew that the Israelis were pocketing whatever they gave, building more settlements and then saying: we need more land. The Palestinians never extracted themselves from that structurally losing proposition, especially the expectation that the Americans would deliver Israel because the Palestinians thought they were the ones being reasonable in the negotiations.

But it didn’t happen, and it didn’t happen. The Americans constantly sided with the unreasonable side, and the Palestinians kept digging themselves deeper and deeper in to this losing proposition.

How could the leaders of the PA have followed such a disastrous course? As Palestinian commentator Saree Makdisi wrote in the Los Angeles Times:

Men like Saeb Erekat, Mahmoud Abbas and Ahmed Qurei…are of a type that has come forth in every colonial conflict of the modern age. Faced with the overwhelming brute power with which colonial states have always sought to break the will of indigenous peoples, they inhabit the craven weakness that the situation seems to dictate. Convinced that colonialism cannot be defeated, they seek to carve out some petty managerial role within it from which they might benefit, even if at the expense of their people.

Now, even as a political earthquake shakes the Middle East with the fall of a dictator in Tunisia and possibility of more ousters to come, nearly two decades of compromise have ingrained habits in the PA leadership that will likely be impossible to break.

Even with the Mubarak regime in Egypt shaken after more than a week of street protests, the PA in the West Bank and Hamas in Gaza both blocked street protests in solidarity with the uprising by the Egyptian people. The PA then went a step further, organizing a pro-Mubarak demonstration on February 2.

This is a telling indicator of the concerns motivating both wings of the Palestinian leadership. Amira Hass, a reporter for Israel’s Haaretz newspaper who has long been a supporter of the Palestinian cause, asked Dr. Mamdouh al-Aker, a former Palestinian negotiator and the current general commissioner of the Palestinian Independent Commission for Human Rights, why the leaders of a people living under occupation did not support a popular uprising. Mamdouh replied:

That’s the result and the price of being dragged to the status of a regime, before liberation, while giving up on the agenda of a national liberation movement. As a regime, they must identify with regimes…The Palestinian Authority’s role has to change. The leadership core must return to the PLO, while the PA should remain with powers as a large municipality. Nothing more. The PLO, which has lost its structure, must be rebuilt.

One of the tragic mistakes is that we didn’t focus on the demand for the right to self-determination that encompasses everything. Instead, they concentrated on the idea of a state. A state? [Benjamim] Netanyahu and [Ariel] Sharon also talk about a state, without land, water and borders. Everything is enclaves. As far as I’m concerned, they can call that an empire.

For decades, but especially in recent years, Egypt’s collaboration with the U.S. and Israel in pursuit of U.S. interests in the Middle East has imposed a high price on Palestinians yearning for freedom. In particular, Egypt is an essential linchpin in enforcing Israel’s suffocating siege of Gaza.

But the PA and Hamas both fear the possible spread of revolt that could threaten their own positions more than what they hope for from an Egyptian revolution that could immediately end the siege of Gaza and shift the regional balance of forces, putting an end to the decades-long subjugation of the Palestinian population in sight.

This is a shameful betrayal, because the growing isolation that Israel now faces, as one after another of its Arab allies implodes, is creating opportunities to pressure Israel into accepting Palestinian demands.

Ever since the “peace process” emerged nearly two decades ago, Socialist Worker was one of only a few voices to reject it as a strategy that would lead only to further Palestinian dispossession. But if the “peace process” is a dead end, came the response, what’s the alternative?

The alternative, and the only practical way to achieve Palestinian liberation, is precisely what’s taking place in the Middle East today–an uprising that draws together poor and working-class Arabs across the region, and topples the corrupt Arab dictators who have done the bidding of their U.S. and Israeli allies for far too long by suppressing a genuine regional movement in solidarity with the Palestinian people.

The Palestine Papers demonstrate why the PA has been on the wrong side of this process from its formation more than a decade ago.