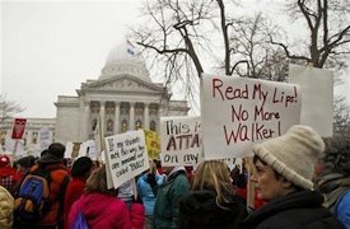 “I have never been prouder of our movement than I am at this moment,”  shouted Wisconsin AFL-CIO President Phil Neuenfeldt, as he surveyed the crowds of union members and their supporters that surged around the state Capitol and into the streets of Madison Wednesday, literally closing the downtown as tens of thousands of Wisconsinites protested their Republican governor’s attempt to strip public employee unions of their collective bargaining rights.

Where Tuesday’s mid-day protests drew crowds estimated at 12,000 to 15,000, Wednesday’s mid-day rally drew 30,000, according to estimates by organizers.  Madison Police Chief Noble Wray, a veteran of 27 years on the city’s force, said he had has never see a protest of this size at the Capitol – and he noted that, while crowd estimates usually just measure those outside, this time the inside of the sprawling state Capitol was “packed.”
On Wednesday night, an estimated 20,000 teachers and their supporters rallied outside the Capitol and then marched into the building, filling the rotunda, stairways and hallways. Chants of “What’s disgusting? Union busting!” shook the building as legislators met in committee rooms late into the night.

Protestors to Wisconsin Gov. Scott Walker’s proposal to eliminate collective bargaining rights for many state workers demonstrate in at the State Capitol in Madison, Wis., Wednesday, Feb. 16, 2011. (AP Photo/Andy Manis) The country was starting to take notice, as broadcast and cable-news satellite trucks rolled into town. The images they captured were stunning, as peaceful crowds filled vast stretches of the square that surrounds the seat of state government.

Republican legislators — who had been poised to pass the governor’s plan Thursday, and might yet do so  – were clearly paying attention. Two GOP senators broke with the governor, at least to some extent. Dale Schultz from rural southeastern Wisconsin and Van Wanggaard from the traditional manufacturing center of Racine, proposed an alternative bill that would allow limit bargaining rights for public employees on wages, pensions and health care for the next two years but allow them to continue to bargain on other issues.

While that’s hardly an attractive prospect to state workers – as it would also require them to make significantly higher pension and health-care contributions –  the measure rejects the most draconian component’s of the governor’s plan. Other Republicans resisted the proposal, however, offering only minor amendments to the governor’s plan.

If Schultz and Wanggaard actually vote “no” Thursday, when the measure is to be taken up, just one more Republican senator would have to join them in order to block the bill.

That the first real movement by Republicans came after Wednesday’s rally was hardly surprising, as few state capital’s have seen the sort of mobilization that occurred at mid-day, and that is likely to reoccur at nightfall as teachers from across the state are expected to pour into the city for a rally and candlelight vigil.

In some senses, Wednesday’s remarkable rally began Tuesday evening, when Madison Teachers Inc., the local education union, announced that teachers would leave their classrooms to spend the day lobbying legislators to “Kill the Bill” that has been proposed by newly-elected Republican Governor Scott Walker.

And then something remarkable happened.

Instead of taking the day off, their students gathered at schools on the west and east sides of Madison and marched miles along the city’s main thoroughfares to join the largest mass demonstration the city has seen in decades – perhaps since the great protests of the Vietnam War era.

Thousands of high school students arrived at the Capital Square, coming from opposite directions, chanting: “We support our teachers! We support public education!”

Thousands of University of Wisconsin students joined them, decked out in the school’s red-and-white colors.

Buses rolled in from every corner of the state, from Racine and Kenosha in the southeast to Green Bay in the northeast, from La Crosse on the Mississippi River to Milwaukee on Lake Michigan.

Buses and cars arrived from Illinois and Minnesota and as far away as Kansas, as teachers and public employees from those states showed up at what American Federation of State, County and Municipal Employees union president Gerald McEntee says is “ground zero “in the struggle for labor rights in America.

The moms and dads of the elementary school kids came, and the kids, carrying hand-lettered signs:

“I love my teacher!”

“Scott Walker needs to go back to school!”

“Scott Walker needs a time out!”

And, “We are Wisconsin!

“I’ve been here since the 1960s, I’ve seen great demonstrations,” said former Mayor Paul Soglin, a proud former student radical who was nominated for a new term in Tuesday’s local primary election. “This is different. This is everyone – everyone turning out.”

Everyone except the governor, who high-tailed it out of town, launching a tour of outlying communities in hopes of drumming up support for his bill. Most of the support Walker was getting was coming from national conservative political groups, such as the Club for Growth, which have long hoped to break public-employee unions. But the governor held firm, saying after a day of unprecedented protests – in Madison and small towns and cities across the state – that he still wanted to pass his bill. He’s got strong support in the overwhelmingly Republican Assembly. But he cannot afford to lose one more Republican state senator. And the unions and their backers are determined to find that one Republican who is smart enough and honest enough to recognize that the governor’s assault of public employees is an assault on Wisconsin itself.

The state’s largest teachers union, the Wisconsin Education Association Council has called on its 98,000 members to come to rally in their hometowns and then come to the Capitol. “All citizens of Wisconsin should come to Madison!” reads the call. Tens of thousands will come. The state, county and municipal employees will come. The nurses will come. The small business owners will come. The parents and students will come. They will ask the question: “What’s disgusting?” And they will answer with a roar: “Union busting!”