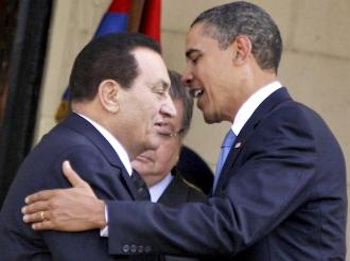 This article was originally published on Socialist Worker from the Belfast Telegraph.

On Feb. 4, Barack Obama said: “The people of Egypt have rights that are universal. That includes the right to peaceful assembly and association, the right to free speech and the ability to determine their own destiny. These are human rights. And the United States will stand up for them everywhere.”

This was the first time any U.S. administration of the past 50 years has associated itself with the cause of democracy in Egypt.

The partnership between the United States and Egypt is a cornerstone of stability and security in the Middle East and beyond, and we look to Egypt for regional and global leadership on a wide range of issues.

In February 2009, just a month after Clinton had arrived at the State Department, her officials delivered a report on human rights in Egypt:

The government limited citizens’ right to change their government and continued a state of emergency that has been in place almost continuously since 1967. Security forces used unwarranted lethal force and tortured and abused prisoners and detainees, in most cases with impunity…Security forces arbitrarily arrested and detained individuals, in some cases for political purposes, and kept them in prolonged pre-trial detention. The government’s respect for freedoms of press, association and religion declined during the year.

There is no record of any response from the U.S. administration until the Egyptian people took to the streets.

At the weekend, Foreign Secretary William Hague weighed in to say that Britain, too, has always been “in favor of greater freedom and democracy, of a more open and flexible political system…(and) freedom of expression” in Egypt.

When it was put to Prime Minister David Cameron afterwards that Mohamed Elbaradei, the Egyptian former head of the UN’s nuclear watchdog agency, had alleged that Britain and the U.S. had backed repression for 30 years, the weak reply fell far short of outright denial: “I don’t believe that’s the case.”

There is no record of any UK government taking a stand for human rights in Egypt over the 29 years of the Mubarak dictatorship. Obama supporters might wonder, too, why “universal” human rights do not seem to apply even yet to Saudi Arabia.

In the month after its report on Egypt, the State Department published its assessment of human rights under the feudal rule of the Saud family:

Disappearances; torture and physical abuse; poor prison and detention centre conditions; arbitrary arrest and incommunicado detention; denial of public trials and lack of due process in the judicial system; political prisoners; restrictions on civil liberties such as freedoms of speech (including the Internet), assembly, association, movement and severe restrictions on religious freedom; and corruption and lack of government transparency. Violence against women, violations of the rights of children and discrimination on the basis of gender, religion, sect and ethnicity were common.

Ten months later, in January 2010, the Washington Post reported a U.S. official in Dubai saying: “The Obama administration is quietly working with Saudi Arabia and other Persian Gulf allies.”

The report referred to “efforts [to] build on commitments by the George W Bush administration to sell warplanes and anti-missile systems to friendly Arab states…Gulf states, particularly Saudi Arabia and the United Arab Emirates, are undertaking multibillion-dollar purchases of U.S.-made defensive systems.”

The Web site of the UK Embassy in Riyadh continues to carry an introduction to the country aimed at intending British visitors: “Saudi Arabia and the United Kingdom have long been close allies and the breadth and depth of Britain’s relationship with the Kingdom continues to increase…Continuing close contact between the British and Saudi royal families highlights the range of the relationship…Two-way trade between our two kingdoms continues to grow.”

The readiness of UK governments to put relations with the Saudi dictatorship ahead even of British law was seen in Tony Blair’s intervention in December 2006 to halt a Serious Fraud Office investigation into the bribery of corrupt Saudi princes to the tune of hundreds of millions of pounds by the arms company BAE Systems to grease the $68 billion arms deal with the ruling family.

What has prompted the U.S. and Britain now suddenly to discover a commitment to human rights in Egypt has been the sound of anger and marching feet. Nothing else.