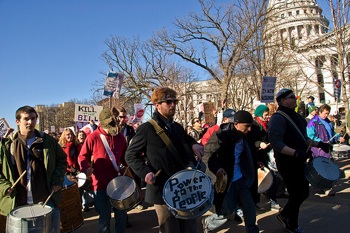 Just before aging stars become white dwarf stars, they emit helium flashes and pulsate across the solar system. Then they fade, and blink into darkness, forever. Conversely, the Big Bang—the birth of the universe—is the beginning of all stars, and precipitates a thousand more Big Bangs.

I thought of this astronomical allegory last night while sleeping on the cold, hard floor of the Wisconsin State Capitol, surrounded by several hundred college students, labor activists and fireman’s union members. Yesterday the demonstrators began their second week of occupying the capitol dome in Madison, in a spirited and coordinated effort to stop the cheese state’s upstart new Republican Governor Scott Walker from gutting public-sector employee labor rights under the guise of fixing the state’s projected $3 billion budget deficit.

Will it work? I asked myself, as I peered down from the third floor at bodies, sleeping bags, solidarity signs and police officers patrolling the grounds.

These protests will inevitably lose some steam in the week ahead as many workers, teachers and students return to their jobs today (yesterday, President’s Day, was a state furlough day). The GOP-controlled State Senate is also expected to begin passing legislation, including elements of Walker’s maligned “budget bill” — in piecemeal fashion if necessary — in an effort to reassert their control and lure the 14 state senate Democrats back from hiding in Illinois.

Organized labor in the state is starting to threaten use of its largest weapon: a general strike. Monday night, members of the 97-union South Central Labor Federation voted unaminously to prepare for a general strike, should Walker’s proposed legislation pass, the Wisconsin State Journal reported.

Still, these demonstrations against the new right-wing political establishment in Wisconsin can’t help but lose some momentum this week. And that begs the question: Will the massive labor rallies we’ve seen in Madison all weekend, which may have attracted as many as 100,000 protesters for several days running, now fade like white dwarf stars (a story in Monday’s New York Times  portends that labor’s heyday here in Wisconsin is a thing of the past), or is this labor’s new Big Bang?

Progressives across the country — indeed, the world — have fixated on the demonstrations in Madison, hoping that the protests will reinvigorate a nascent labor movement.

Jesse Jackson is here today, leading a march from East High School (where teachers return to class today) to the Capitol; Tom Morello from Rage Against the Machine played two concerts last night, where he channeled his inner Woody Guthrie; over 500 people — including one from Cairo — have called Ian’s Pizza on State Street to order pies to be delivered to the squatters camped out in the dome; and leftist luminaries everywhere have expressed solidarity with workers in Wisconsin. Progressives want the Madison protests to trigger a Big Bang.

But the words in yesterday’s Times story, “Union Bonds in Wisconsin Begin to Fray” were ominous:

Across Wisconsin, residents like Mr. Hahan have fumed in recent years as tens of thousands of manufacturing jobs have vanished, and as some of the state’s best-known corporations have pressured workers to accept benefit cuts.

Wisconsin’s financial problems are not as dire as those of many other states. But a simmering resentment over those lost jobs and lost benefits in private industry — combined with the state’s history of highly polarized politics — may explain why Wisconsin, once a pioneer in supporting organized labor, has set off a debate that is spreading to other states over public workers, unions and budget woes.

There are deeply divided opinions and shifting allegiances over whether unions are helping or hurting people who have been caught in the recent economic squeeze. And workers themselves, being pitted against one another, are finding it hard to feel sympathy or offer solidarity, with their own jobs lost and their benefits and pensions cut back or cut off.

Wisconsin is the land of “Fighting Bob” LaFollette, whose statue sits proudly in the second floor of the Capitol. It’s also the land of recently deposed Senator Russ Feingold. But the cheese state was also home to the livid anti-progressive Sen. Joe McCarthy. In that vein, perhaps Gov. Walker’s rise, and his assault on the left, isn’t so unprecedented.

But it’s up to national unions now. Will the Madison uprising go down in history as the helium flash before eternal darkness, or a new Big Bang?