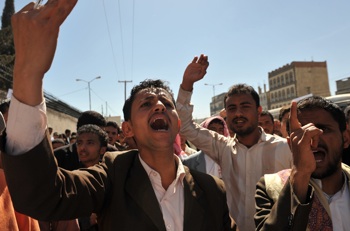 Ali Abdullah Saleh, the Yemeni president, has backed down on a plan to rule his impoverished Arab country for life after mass protests demanding his ouster.

In an announcement on Wednesday, Saleh said he plans for elections in April had been scrapped along with constitutional amendments that would have seen him become president for life.

“I will not extend my mandate and I am against hereditary rule,” he said.

The move would bring an end to a three-decade rule when his current term expires in 2013.

Eyeing protests that brought down Tunisia’s leader and threaten to topple Egypt’s president, Saleh vowed not to pass on the reins of power to his son.

“No extension, no inheritance, no resetting the clock,” Saleh said during an emergency session of parliament and the consultative council ahead of a “day of rage” organised by civil society groups and opposition leaders for Thursday in all provinces.

Activists and opposition supporters have staged several protests in Sanaa, the capital, boldly asking for Saleh’s removal and decrying reports he plans to install his son in power.

Yemen’s biggest opposition party described the package of concessions by president Saleh as positive  but said a large opposition rally would go on as planned.

“We consider this initiative positive and we await the next concrete steps. As for our plan for a rally tomorrow, the plan stands and it will be organised and orderly,” he said.

“This is a peaceful struggle through which the people can make their voices heard and express their aspirations.”

Tensions soared in Yemen after parliament, dominated by the president’s General People’s Congress, endorsed the draft constitutional amendment that, if approved, would have enabled Saleh to stay in office for life.

His critics had also suspected him of grooming his eldest son Ahmed Saleh, who commands the Republican Guard, an elite unit of the Yemeni army, to succeed him.

Demonstrations in the country had taken place on a nearly daily basis until last weekend.

Poverty is widespread in Yemen, with 45 per cent of its 21.1 million people living on less than $2 a day, according the UN Development Programme.