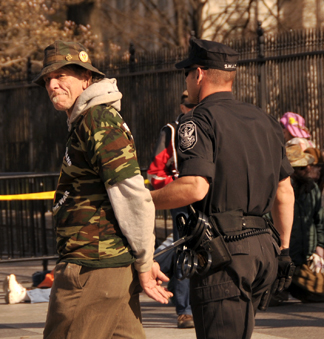 Some 1500 activists rallied in Lafayette Park and marched to the White House fence today, where 113 were arrested. Chanting “Stop the wars, expose the lies, free Bradley Manning!” the protesters marked the eighth anniversary of the U.S. invasion and occupation of Iraq. The action was sponsored by Veterans For Peace, Iraq Veterans Against the War, Vietnam Veterans Against the War, and March Forward! and endorsers included ­ANSWER, Fellow­ship of Reconciliation, ­CODEPINK, Voters for Peace, United for Peace and ­Justice, World Can’t Wait, Peace Action, United National Antiwar Committee, and the War Resisters League.Speakers at the rally included Daniel Ellsberg, Medea Benjamin, Ralph Nader, and Ret. Col. Ann Wright.

The activists plan to follow up March 20 with a rally at the Marine base at Quantico, where Private First Class Bradley Manning, accused of releasing classified government information to the WikiLeaks website, has been held in solitary confinement for nine months.

For more information about the next action, watch stopthesewars.org.

Pictures of March 19 by Irina Ivanova