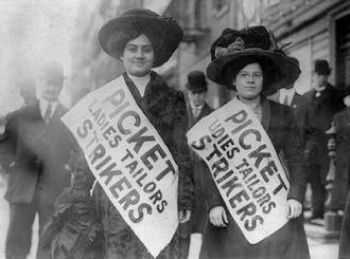 It’s the 100th anniversary of the first International Women’s Day, and Newsweek is celebrating “150 Women Who Shake the World.”

While it includes a small selection of women rights activists, the list of shakers is weighted down by the likes of Secretary of State Hillary Clinton, former National Security Advisor Condoleezza Rice and German Chancellor Angela Merkel–women whose foreign policy decisions only make the lives of women in most of the world worse.

And if the definition of “powerful women” is their ability to amass wealth and influence at the expense of others, then the Newsweek list does its job–it includes billionaire Melinda Gates, former Washington, D.C., school “reform” guru Michelle Rhee and former First Lady Laura Bush.

But if you’re looking for powerful women who oppose exploitation, Newsweek is probably the wrong place to look. Because the source of women’s power–and the real legacy of International Women’s Day–is in protests and strikes that are part of a long and rich history of the women workers’ movement internationally.

This power was demonstrated just a few weeks ago in Cairo’s Tahrir Square–as men and women gathered in protests that took down Egyptian dictator Hosni Mubarak.

Asmaa Mahfouz, one of the founders of the April 6 Youth Movement who helped initiate the call for protests on January 25, described the transformation that took place in the square: “This is the first time in my life…I was not sexually harassed in a public square. The thousands of men in that square treated me like a human being.”

It was here, on the streets in the midst of revolution, that women could begin to get a taste of the equality that they had long been fighting for.

This is the real significance of International Women’s Day–that a woman’s place is in the revolution. It’s in the struggle that women and men can come together and strive for true liberation and equality.

International Women’s Day was first called in 1910 at the Second International Conference of Working Women, led by German socialist Clara Zetkin. It was inspired by the struggles of women workers in the U.S., particularly textile workers in New York City, who organized a massive march in March 1908.

In the early part of the 20th century, women were playing a rapidly expanding role as workers in the growing industries of the U.S., such as textiles. They faced grueling, filthy and dangerous working conditions inside the factories, at low pay for long hours.

Women workers began to organize against these horrible working conditions–and other women began to demand a voice in the political process by getting the vote, or suffrage. In 1908, some 15,000 marched in New York City marched for shorter work hours, better pay and an end to child labor, as well as voting rights.

They marched under the banner “Bread and Roses”–with the vision that their struggle was about everyday economic demands and the right to be able to feed their families, but also the right to a better quality of life.

The “Rising of the 20,000,” as it was called, was a strike of young immigrant women–many of them teenagers–who worked in New York City’s garment industry. Working in cruel and underpaid conditions in which bosses often forced workers to pay for the needles and thread they used, the vote to strike in November was almost unanimous among the rank-and-file workers, even though many official union leaders urged caution.

One of the strike’s rank-and-file leaders was Clara Lemlich, a Ukrainian-born 19-year-old, who was already a veteran activist, having been arrested 17 times–and having just gotten out of the hospital after a beating on the picket line.

At the end of the fierce strike, workers won a shorter workweek and four holidays with pay, and workers no longer had to provide their own tools. But they didn’t get union recognition. The importance of organization on the shop floor strong enough to take on the company around issues like safety and help enforce already existing laws became clearer than ever in 1911 when a fire at the Triangle Shirtwaist Factory killed 146 workers–many were forced by the blaze to jump out of windows.

But though better working conditions in the garment industry were far from accomplished, the 1909 strike marked an important development in the struggle for women workers to organize. As Lemlich said, “They used to say you couldn’t even organize women. They wouldn’t come to union meetings. They were ‘temporary workers.’ Well, we showed them!”

Inspired by these brave struggles in the U.S., Clara Zetkin called on attendees at the International Conference of Working Women in 1910 to support an International Women’s Day celebration and a platform for socialists that put forward both political and economic demands for women workers.

In opposition to several delegates who believed that it would be more “realistic” to confine their demand to partial suffrage for women, keeping existing property and income restrictions, Zetkin, along with Russian delegate Alexandra Kollantai, argued for universal suffrage, linking the struggle for the political rights of working-class women with their economic rights. Their resolution passed.

Its success exceeded all expectation. Germany and Austria on Working Women’s Day was one seething, trembling sea of women. Meetings were organized everywhere–in the small towns and even in the villages, halls were packed so full that they had to ask male workers to give up their places for the women.

This was certainly the first show of militancy by the working woman. Men stayed at home with their children for a change, and their wives, the captive housewives, went to meetings.

During the largest street demonstrations, in which 30,000 were taking part, the police decided to remove the demonstrators’ banners: the women workers made a stand. In the scuffle that followed, bloodshed was averted only with the help of the socialist deputies in parliament.

And just as the struggles of working women in the U.S. sparked international days of action to demand rights for women everywhere, International Women’s Day protests in Russia in 1917 helped spark a revolution that would inspire workers all over the world.

In February 1917, Russian women gathered on International Women’s Day to protest in opposition to the war, high prices and the conditions of women workers. This became the first day of the Russian Revolution, inspiring a strike wave throughout the country.

Women workers took the lead in the struggle, as did their demands, and after the October Revolution, Russian revolutionaries put into effect reforms that could have a real effect on the lives of women workers, such as equal pay for equal work, freedom to divorce, paid maternity leave and taking laws off the books that criminalized homosexuality.

And they attempted as best as they could, considering the shortage of resources in Russian society, to create the conditions in which liberation could begin to blossom. This meant in large part freeing women from the double burden they bear in the home–by building communal restaurants, child care centers and laundries.

The Russian revolutionary Lenin minced no words about the nature of housework:

Notwithstanding all the laws emancipating woman, she continues to be a domestic slave, because petty housework crushes, strangles, stultifies and degrades her, chains her to the kitchen and the nursery, and she wastes her labor on barbarously unproductive, petty, nerve-racking, stultifying and crushing drudgery.

The real emancipation of women, real communism, will begin only where and when an all-out struggle begins (led by the proletariat wielding the state power) against this petty housekeeping, or rather when its wholesale transformation into a large-scale socialist economy begins.

Unfortunately, workers’ power in Russia was isolated and therefore short-lived–and as soon as the Stalinist counterrevolution came into power, the status of women drastically declined.

The experience in Russia demonstrated that socialism, and alongside it true women’s liberation, cannot simply be decreed into existence, but the material conditions for equality have to be created. This means that the wealth and abundance that is currently devoted to the profit of the few at the top of society must be devoted to the needs of the all.

This is a fight that can only be won by combating the ideas that divide men and women workers, and by bringing all of us together in actions that make use stronger–fighting the people who actually want to take away our rights, whether it’s Hosni Mubarak in Egypt or the foes of abortion rights and workers’ rights in Washington, D.C.

Divided, we are weak. Together, we are stronger.