Today is International Women’s Day, and while there’s plenty of reason to celebrate the accomplishments of women worldwide, it’s also important to note when those accomplishments are compromised. Such was the case this week in Egypt, where hundreds of women gathered for a Million Woman March in Cairo. Women, of course, were at the forefront of last month’s revolutions that captured the world’s attention. But on Tuesday, the women of Cairo were met by some men shouting anti-feminist slogans.CNN reported that there were men on both sides of the protests, allegedly shouting that women should “go home” where they “belong.” Pro-feminist activists took to Facebook to highlight the importance of women, according to CNN:

“The bodies of women, so often used as ideological battlegrounds, have withstood all kinds of police violence, from tear gas to live bullets. The real battleground did not differentiate between women and men,” they said on Facebook.

“The barrier of patriarchal control is one that Egyptians have managed to break since day one of the revolution,” march organizers said in calling for the demonstration on Tuesday, which is International Women’s Day.

“For a long time, (patriarchy) had stifled Egyptian society as a whole and was felt most acutely by women,” they said.

Of course, uber patriarchal sentiment isn’t isolated to Egypt, or the Middle East (no matter what Bill Maher may have you think). In recent weeks Republicans have launched an all-out attack against women’s right to choose. Global Justice columnist Michelle Chen outlined how that Republican attack has since gone global. 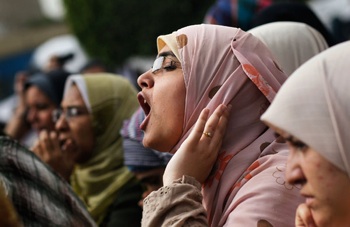 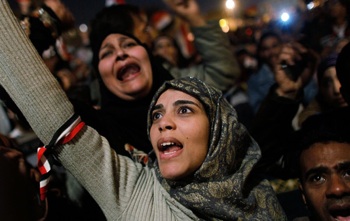