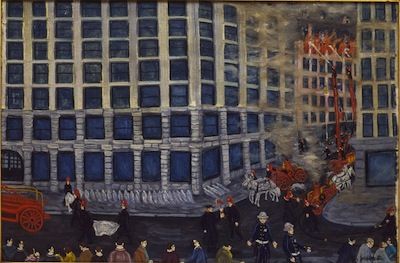 The Triangle Shirtwaist Factory Fire: One Hundred Years After
NYU Open House
528 LaGuardia Place
Through May 19

It’s a tombstone, but an especially lovely one: Evelyn Beatrice Longman’s marbled pink monolith, The Triangle Fire Memorial to the Unknowns, features a robed, neoclassical figure etched in eternal grief. Located in Brooklyn’s Cemetery of the Evergreens, it is a monument for the seven workers who perished in the Triangle shirtwaist factory fire of March 25, 1911, and could not be identified. The factory was located on the upper floors of a “fireproof” building in lower Manhattan. There, hundreds of garment workers, most of them young, female Jewish and Italian immigrants, made women’s blouses under brutal working conditions. With a cramped work floor, an abundance of oily, flammable rags and locked factory doors (a common feature of sweatshops), a small grease fire killed 146 workers, and injured 71 more, in less than half an hour.

Self-taught painter Victor Joseph Gatto witnessed the tragedy in his youth, and his Triangle Fire, March 25, 1911 (1944) shows a view from the street: a shock of flame interrupting a march of blank buildings; confused onlookers, firemen and horses; and rendered as fey wisps, a growing file of shrouded, anonymous bodies neatly placed on the sidewalk.

While a memorial was erected in Queens’ Mount Zion Cemetery in 1911, and Longman’s tombstone-remembrance was finished in 1912, a stone monument is never really enough. Speaking at the second anniversary of the fire, International Ladies Garment Workers Union (ILGWU) leader and former Triangle employee Pauline M. Newman put it like so: “The way to honor the memory of the dead is to build up a strong and powerful organization that will prevent such disasters as that of two years ago and serve as a monument to the dead. Lest we forget!”

Located only a few feet from the old factory (which is now New York University’s Brown Building), two exhibits at NYU seek to chronicle the ongoing activism that has been the true legacy of the fire. At NYU’s Open House, the Tamiment Library has curated “The Triangle Shirtwaist Factory Fire: One Hundred Years After.” As an exhibition, it’s a bit dispiriting: composed almost entirely of digital printouts, it feels more like a slide show or a website, not something that needs to be hanging on a wall. That aside, it’s an estimable collection of images and information.

Meanwhile, NYU graduate students in Public History and Museum Studies, in collaboration with Professors Lucy Oakley and Marci Reaven, have co-curated “Art/ Memory/Place: Commemorating the Triangle Shirtwaist Factory Fire” with the Grey Gallery. Here, the story is told through a combination of old photos, artwork (including Gatto’s painting and small sculptures by Longman), news articles and protest ephemera. The fire was politicized from the start: The city’s insistence on a private burial for the workers led unions to organize a memorial parade for the same day, which drew, according to the Open House exhibit, around 370,000 mourners. Both exhibits include wonderful, biting editorial cartoons published in the immediate aftermath of the tragedy, squarely placing the blame on the greed and callousness of the factory owners. The Grey Gallery also includes The Overcrowded Raft, a bracingly stressful/storm-y 1913 illustration by Joseph Keppler, Jr., in which a huddled mass of working women have been set adrift in a “sea of want,” barely afloat on their meager wages, tormented by sharks named “disease” and “prostitution.”

The Triangle fire was a pivotal moment in U.S. labor history. So many things — from the galvanization of unions and the criminalization of sweatshops to New York building codes and New Deal labor laws — can be traced back to those 146 workers. Today, in lower Manhattan, the Brown Building is filled with computers instead of sewing machines, and former tenement slums rent for $2,000 a month. But at the Grey Gallery exhibit, there’s a 1994 ILGWU anti-sweatshop flier: through the photocopied haze, we see a harsh factory hallway, a uniformed official, a row of shrouded bodies. The photo is of a Thai toy factory where, in 1993, 188 workers, mainly young and female, were killed in a fire. They were unable to escape because the factory doors were locked. Perhaps they deserve a monument, too.