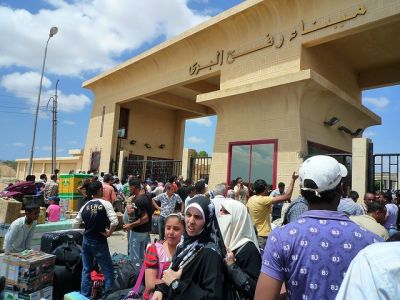 The popular revolution that ousted Egyptian dictator Hosni Mubarak has focused renewed attention on Egypt’s role in the blockade of the Gaza Strip. For nearly four years Egypt has aided Israel and the United States in strangling Gaza’s economy, but there are small signs that the siege may be easing.

“The world keeps watching as Gaza is blockaded,” said Mousheera Jammal, a Palestinian activist in Gaza who has been involved with organizing against the clampdown, but “there is hope because of the Egyptian youth.”

On March 6, a delegation organized by Tahrir 4 Gaza successfully crossed the Egyptian border into Gaza and delivered a “symbolic 50-pound bag of cement.” It was the “first bag of cement not approved by Israel” and that hadn’t come through smuggling tunnels, according to a press release from Tahrir 4 Gaza.

Organizers had to contend, however, with a recalcitrant Egyptian military which is currently running the show in Egypt. Posts by activists on tahrir4gaza.net claimed the military pressured them to “reschedule the event,” and that authorities warned bus companies against transporting delegation members to the border.

Organizers are now planning to bring 30 tons of cement into Gaza as part of a series of trips that would “eventually culminate in the permanent opening of the border to people and goods between post-revolutionary Egypt and Palestine,” according to delegation head Ahmed Elassy.

Since 2007, both Israel and Egypt have imposed a crippling siege on the 1.3 million Palestinians in Gaza to undermine the government led by Hamas, which won elections in January 2006 for the Palestinian parliament and the following year defeated a coup launched by the U.S. and Israeli-backed Fatah.

Cementing its role as junior partner in U.S. and Israeli dominance in the region, Egypt shut the Rafah crossing along Southern Gaza, closing a critical point of access for trade, goods and people.

Palestinian attorney and analyst Noura Erekat explains that Egypt’s cooperation with the blockade is largely due to pressure from the United States and Israel, as well as a view shared with Israel that the Islamist Hamas movement is a threat.

Yet the revolution in Egypt has altered this equation. Prominent Egyptian figures such as Arab League General Secretary Amr Moussa and Nobel laureate Mohamed ElBaradei have spoken out against the blockade. The Muslim Brotherhood, Egypt’s largest opposition group, is also against the blockade. And Egypt’s Foreign Minister Nabil al-Arabi has called for an end to the siege.

The key player is Egypt’s military, however. It has close ties to Israel, receives $1.3 billion a year in U.S. military aid and is ruling the country by decree while elections are organized.

The Palestinian Ma’an News Agency reported March 6 “getting out of Gaza is harder than ever.” The agency stated that the “blacklist” — Palestinians who are banned from entering Egypt — “has got longer since the Egyptian revolution, quashing hopes that the new regime would lift the siege.”

According to observers, the Egyptian military’s position on the blockade, and its insistence on allowing only 300 Palestinians per day to leave Gaza stems from various factors.

Nadia Hijab, a senior fellow at the Institute for Palestine Studies told The Indypendenet that Egypt’s rulers fear any further opening of Rafah could provide impetus for Israel to throw Gaza into Egypt’s lap. Egypt occupied Gaza for nearly two decades starting in 1948. Following its sweeping victory over Arab states including Egypt in the 1967 Six Day War, Israel began the direct military occupation of Gaza, the West Bank and East Jerusalem, among other lands.

Israel has been hoping to rid itself of responsibility for Gaza for “a long time now, and I would think that the military would be very aware of that,” said Hijab. “The military will probably walk a fine line between loosening up the blockade without inheriting Gaza.”

Noura Erekat adds, “Given the considersations that this new regime will have, and the threats that it will face, it can’t [decide to lift the blockade] in a vacuum.” Those threats include Israel’s powerful military as well as the possibilities of  strict conditions on or cuts to U.S. military aid. The worst-case scenario, according to Erekat, could be Israeli forces threatening to police the border themselves on the Egytian side.

“Fundamentally, the official position is the same for now,” wrote Issandr El Amrani, and Egyptian journalist, in a March 7 blog post on arabist.net. “Egypt has a moral responsibility to address the humanitarian situation in Gaza, as well as encourage the international community to pressure Israel into lifting the siege.”